The proposed Brighton zip wire has been approved by planners despite objections from some of those who live and work near by.

The £1.7 million attraction could be open by next Easter as a replacement for the Brighton Wheel which closed in May – shortly before the opening of the i360.

The ride would start from the Dalton’s Bastion site of the Brighton Wheel and finish in a boat-like structure in Madeira Drive opposite the bottom of Atlingworth Street. 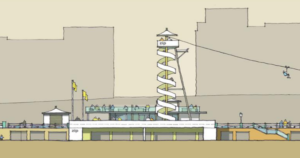 A café seating up to 140 people, with an open glass-fronted terrace, was approved as part of the application.

The developer said that the zip wire would attract about 32,000 visitors a year, based on a maximum of 24 riders an hour on the two cables.

It is planned to open the attraction from 10am until 11pm all year round although the weather is likely to restrict numbers at times.

Councillor Lynda Hyde, who used to chair the committee, said that she was delighted that businesses were willing to invest in the seafront.

She said: “This is a fantastic application. I’ve seen people having fun and coming to the one on the seafront in Bournemouth.

“I think this will encourage day-trippers to come down. It’s an improvement to the area.”

She said that was worried about the metal finish proposed for the “boat” where people using the zip wire would land.

Councillor Hyde said: “We have two sculptures on the seafront which are rusting metal – the donut and the half-circle bowl – and they’re deeply unattractive.

“I support the application but I don’t want another piece of rusty metal on my seafront. Treated wood would be so much better.

“Would members rather see a lump of rusting metal or would they rather see something more attractive?”

Councillor Julie Cattell, who now chairs the committee, said: “I love the landing stage. I think the start looks like a helter skelter.

“This is a great for investment on our seafront. We have a strategy all the way to the Marina.

“I hope this is the first of many schemes that we will see coming forward.”

Delso Da Silva, from Paramount, said: “We’re really excited at the moment and really happy with the outcome. We just wanted to get started with it now.”

Mr Da Silva, who was general manager of the Brighton Wheel, added: “It’s all about getting the trade back to Madeira Drive and getting the jobs back there.”

He hoped that about 35 to 40 people – a mix of full and part-tie staff – would work at the attraction.

During the meeting, planning consultant Ian Coomber said: “Much has been said around noise but of course this site is far removed from immediate residential neighbours in an area with an audible PA system from the pier and nearby fish and chip café.

“In the summer this includes jetskis as well as an often quite intimidating and loud flocks of hungry seagulls. And a seagull can emit an 80-decibel squawk.”