A bomb scare which led to the evacuation of dozens of people for several hours on Friday night was sparked by “a number of electrical items”. 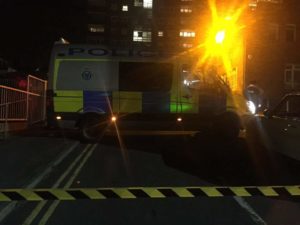 Police were searching a flat in relation to a burglary when they found what they thought was a device at about 4.20pm, which sparked the evacuation of flats above and below until past 9pm.

The bomb squad was called, but in the end no action needed to be taken as it was examined and declared safe.

A 53-year-old man arrested on suspicion of handling stolen goods was also later let go with no charges brought.

A police spokeswoman said: “A suspicious device discovered by police as they carried out an unrelated search of a flat in Brighton was examined and declared safe by the Explosive Ordnance Disposal (EOD) experts who attended to assist police at the scene.

“Residents who were evacuated from the block of flats in Grosvenor Street at about 4.21pm on Friday (7 October) for a short period while the flat was searched were allowed back to their homes.

“The flat was being searched in relation to a burglary in Hove in August. A 53-year-old man was arrested in suspicion of handling stolen goods in relation to this not the suspicious device. He was later released without further action.

“The device consisted of a number of electrical items.”