Brighton and Hove Albion beat Wolves at the Amex thanks to an early Sam Baldock header. But oh so nearly lost out again, at the end as the Wolves smelt blood in the final minutes.

Albion went ahead after a fine cross from Gaetan Bong was deftly headed home via the underside of the cross bar by Baldock. It was his third goal in three games.

The combination of Glenn Murray and Baldock is looking fruitful although Murray looked a little out of sorts, giving the ball away more than a few times in the first half.

Wolves to their credit had a lot of possession. Nouha Dicko and Joe Mason looked a useful pairing but they were being well marshalled by the blossoming partnership of Shane Duffy and Lewis Dunk.

Wolves were able to test David Stockdale with some teasing corners and crosses from Helder Costa.

Before the half was out Shane Duffy nearly opened his Albion account as he directed a super Jiri Skalak corner just over the bar.

Just before half time Costa let fly with a dipping shot which was expertly tipped over by Stockdale.

Albion let the points slip away against Preston on Saturday much to Chris Hughton’s frustration. And again Albion started very slowly in the second half, with Wolves enjoying a lot of early possession.

Albion tried to break forward with Skalak and the ever impressive Anthony Knockaert the outlets.

Murray was still looking sluggish. But there was one sublime piece of Knockaert skill. The little Frenchman beat four players and crossed in for the on-loan striker.  However, Murray’s shot was deflected wide. Many Albion fans who witnessed Knockaert’s skill, will be thinking what a long and slow January we might have in store.

Steve Sidwell was all over the pitch, making tackles and blocks, getting in the box and making forward runs to support the front players.

On this form it’s going to be very difficult for Beram Kayal and Dale Stephens to replace him.  The same with Oliver Norwood who had  another solid match and has a good range of passes.

Skalak showed great tenacity and determination to keep a ball in play on the byline and whip in a great cross that just eluded Murray.

Bruno Saltor looked like he had a groin strain and was replaced by Connor Goldson who looked more like a wing back than a full back.

Goldson got into some good crossing positions and supported Knockaert well.

As time ticked down so Wolves came at Albion again. As Joao Teixeira on as sub,  and ran at the Seagulls defence, the ball fell to Danny Baath whose fierce shot was excellently pushed away by Stockdale.

Wolves really had the bit between their teeth as Costa then saw his volley shovelled away by Stockdale.

The resulting corner led to seven more for Wolves. Each one flashing across the face of Stockdale’s goal. Dunk and Duffy were strong and dealt with Wolves’ aerial attack as Wolves keeper Carl Ikeme joined in the onslaught with Walter Zenga waving him forward. 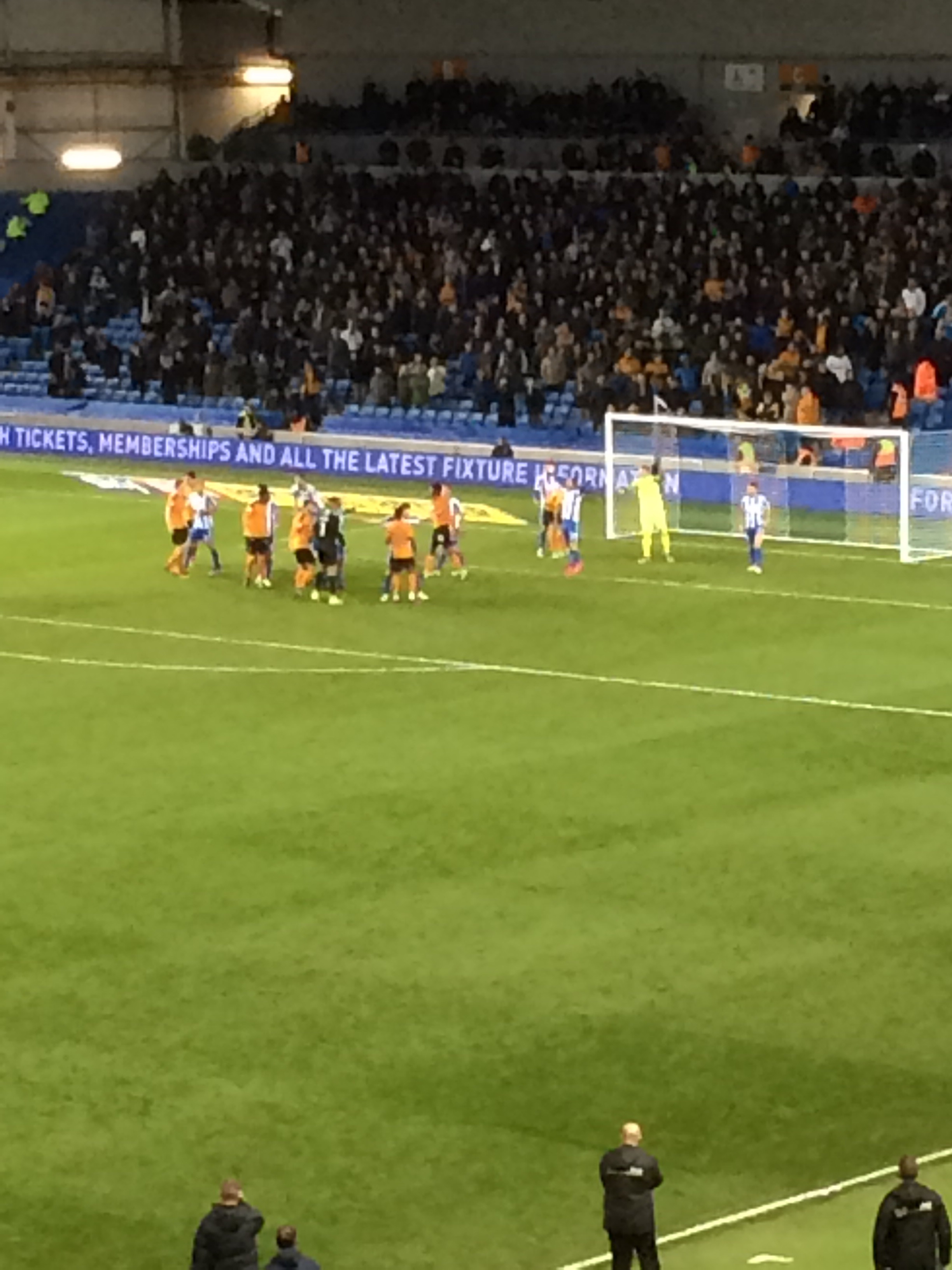 Lewis Dunk was booked at some point and the Albion were penned back in their own penalty area for the last five minutes although to many fans it will have seemed longer.

The Seagulls survived. Eventually Keith Stroud blew the final whistle and Albion can go to Wigan on Saturday in third place.