Brighton drink driver banned after police dog sniffs him out

A drink driver from Brighton has been banned after being tracked down by a police dog when he fled a crash.

Police dog Blyss sniffed out Tyler Thompson, 20, from Marden Close, Woodingdean, after the crash at the Beddingham roundabout, just outside Lewes.

Thompson was three miles from the scene of the crash when Blyss, a Belgian shepherd, helped officers run him to ground.

Thompson, who works as a telephonist, admitted drink driving with 45 micrograms of alcohol per 100 millilitres of his breath at Brighton Magistrates’ Court last Thursday (20 October).

He was disqualified from driving for 16 months, fined £275 and ordered to pay £85 costs and a £30 victim surcharge. 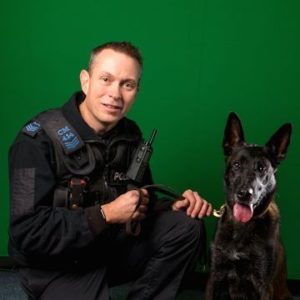 Sussex Police said: “Four men were seen to abandon and run from a Volkswagen Polo after it collided with signage at Beddingham Roundabout, near Lewes, on Sunday 18 September.

“Officers, assisted by Belgian shepherd police dog Blyss, located the suspects on the A26 at Tarring Neville and a man was arrested.

“The seven-year-old had tracked the scent of the quartet for three miles across the South Downs – ignoring distractions such as traffic and livestock – where they were detained by a team of eagle-eyes officers who searched the road ahead of their Sussex Police colleagues.

“Tyler Thompson was arrested at the scene.”

Blyss’s handler, Sergeant Graeme McKee, said: “Drink driving is an offence that can devastate people’s lives and I’m really pleased that Blyss could play an important role in securing this conviction.

“We tracked this suspect for nearly three miles, over hill and dale, through fields of sheep and crossing the South Downs Way, where he was detained by other officers who had travelled ahead.

“This is an excellent example of police working together to get the job done.

“I hope this will serve as a reminder of the dangers of drink and drug driving and what an excellent job our police dogs do in helping to keep the people of Sussex and Surrey safe.”