A £60 million scheme to revamp one of Brighton’s prime seafront sites “will still happen”, according to council leader Warren Morgan.

In the meantime the site’s owner is putting up hoardings to improve the appearance of the site – the Aquarium Terraces, just to the east of the Sea Life Centre.

Private members’ club Soho House intends to demolish part of the site and revamp part of it, creating a club for members as well as restaurants open to the public.

Councillor Morgan, the Labour leader of Brighton and Hove City Council, said: “I’ve been chasing for progress on the redevelopment of the Aquarium Terraces for the past few months – and particularly over the past fortnight since the publication of the Seafront Strategy. 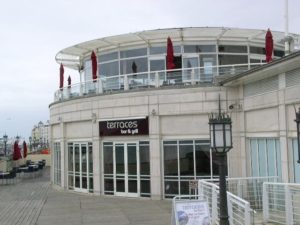 “I have established that Soho House are still committed to the scheme.

“I’m pleased to say hoardings are now being put up to hide the dilapidated buildings. They will have information on showing what the developers plan to do.

“We anticipate redevelopment starting in the coming months with the aim of opening the first phase in late summer or autumn 2017.

“I share people’s concern about the poor appearance of the site in such an important position, in the middle of our seafront shop window. 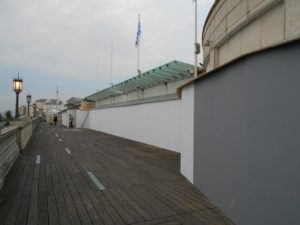 “We gave the main scheme planning permission back in April. Last month owners of the site lease, Brighton Seafront Regeneration Ltd, submitted another planning application required to finalise various details of the building such as materials and finishes. So things are moving ahead.

“In the meantime they are building a hoarding around the site to improve its appearance. That will also carry details of the scheme and provide some reassurance that the project is progressing behind the scenes and will still happen.”