A dramatic police pursuit of a convict who punched a police officer while escaping court ended in Brighton this afternoon. 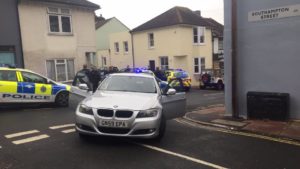 The pursuit started in Lewes shortly after 2pm after a man who had just been sentenced for affray escaped from custody at Lewes Crown Court.

The NPAS Redhill helicopter hovered over Lewes for some time before coming to Brighton when the trail was picked up outside a shop in Queens Park Road.

At about 2.35pm, a man was arrested in Scotland Street and the helicopter was stood down.

A police spokesman said: “Police are appealing for witnesses after a man who had just been sentenced for affray ran out of Lewes Crown Court and assaulted an officer on Monday (14 November).

“Following a thorough search of the area involving the police helicopter and dog units, a 30-year-old man from Lewes was found coming out of a shop in Queens Park Road, Brighton at around 2.30pm.

“He was arrested on suspicion of escaping lawful custody and assaulting a police officer and currently remains in police custody.

“You can also report online to https://sussex.police.uk/contact-us/response-to-appeal/or call 101.”

One passer by, Becs Kent, saw a man being taken away in handcuffs on the corner of Scotland Street and Southover Street. She said: “There were six cars with flashing lights and a BMW without lights and the helicopter hovering overhead.

“They had a guy in cuffs and took him down the street.

“Someone else said a guy had been running down Finsbury Road.”

Bystander Loyd Knight, who was working on Southover Street opposite the Charles Napier, said: “This scruffy bloke ran past and he went round the corner and the police came after him.

“The police were shouting at the geezer to stop, but it looked like he had no interest in stopping.”