A huge mural commissioned by Starbucks in Brighton’s North Laine has been repeatedly defaced by street artists apparently angry at the multinational company’s appropriation of their space. 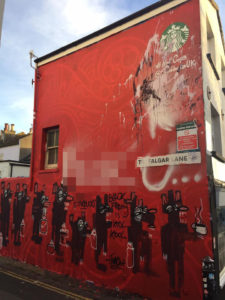 Rats and expletives painted over the first Starbucks mural. Photo by Anna Clark

/>
The mural, a replica of the coffee chain’s red winter cups design, has been painted on a wall in Trafalgar Lane, which is a well known space for local graffiti artists to draw murals.

It first appeared last week, but by Friday, it had been painted over, the Starbucks logo defaced, expletives scrawled on it, and rats drinking coffee painted along the bottom.

It was quickly repainted with another Starbucks cup design, but within hours more scrawls had appeared, with the logo again covered with paint splats. 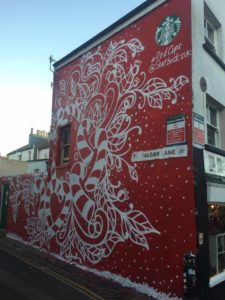 The second mural, painted on Friday. Photo by Anna Clark

When asked what they thought about the damage inflicted on the murals, Starbucks UK responded: “This year our red cups have been designed by customers all over the world. To celebrate their individuality and spread Christmas cheer in communities close to where we have stores, local artists have painted red cup wall murals in five UK cities.”

A spokeswoman also said that Starbucks had an agreement with the landlord to paint the mural on the side of the building.

Commercial murals in Brighton and Hove generally also require advertising consent from the city council, which has required those without to be painted over in the past, including the Taste of Sahara and Pie Society in Western Road. The latter remains as the company which painted it went bust.

No applications for advertising consent have been made for the property in question, nor for any address in Trafalgar Lane.

However, a spokeswoman for Brighton and Hove City Council said this mural, which carries the Starbucks logo, Twitter account and a marketing hashtag, did not require advertising consent. 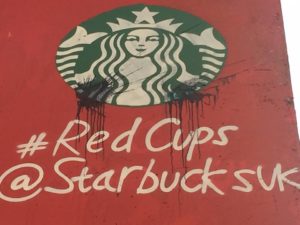 Earlier this year two Brighton artists were fined by the city council’s new environmental enforcement officers for painting a mural a few metres away from this in Trafalgar Lane because they had not asked the owner of the wall.

In 2008, Starbucks opened a branch in St James’s Street without planning permission, leading to weekly demonstrations outside it by residents angry at its flouting of local regulations. The branch was eventually granted permission in 2009.