Burglars broke in to a family firm’s workshop on Christmas Eve and stole specialist equipment worth £10,000.

Four people were caught on CCTV along with two vehicles – a van and a car – at C R Allen and Sons at Lower Hoddern Farm, Pelham Rise, Peacehaven, just after midnight.

They appear to be four young men, one of whom entered the workshop and stole a new specialist diagnostic tool used with the latest Land Rovers.

They were driving a white van, possibly a Ford Transit, and a silver Ford Focus.

Sasha Windsor, who runs the office at the long-stablished family firm, said: “They broke in by our MoT bay door through a window. They may have used a crowbar.

“They ran straight to the corner of the workshop where our diagnostic equipment is kept. Only one person came into the workshop. 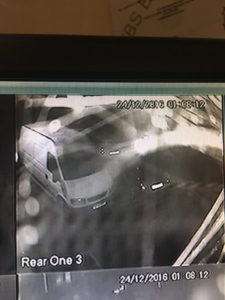 “We deadlocked our doors. They were using an angle grinder but they couldn’t get the doors open.

“They took our diagnostic equipment for a Land Rover. It’s up to date – the best you can get.

“It looks like a really big tablet computer with handles or grips either side.”

The diagnostic tool was described as housed in a blue plastic box. The top or face is similar in size to A4 paper.

The burglars fled just after 12.15am having set off the alarms.

The firm, started by Chris Allen in 1980 and based at Lower Hoddern Farm for the past 32 years, has handed CCTV footage to Sussex Police.

Anyone with information is asked to phone Sussex Police on 101 or email 101@sussex.pnn.police.uk quoting serial number 0013 of 24/12.