Planners have given permission for a £19 million scheme to build four blocks of flats on a hilltop site in Hove, next to the A27 Brighton bypass.

The 69 flats are for the Court Farm House site at the top of King George VI Avenue, known locally as Snakey Hill.

The site overlooks Toad’s Hole Valley where hundreds more homes are planned along with shops, workspaces, community buildings and a school.

Several members of the Brighton and Hove City Council Planning Committee had concerns about safety issues when they discussed the scheme at Hove Town Hall this afternoon (Wednesday 11 January).

The safety concerns were about traffic, the layout of a new junction, close to the roundabout by the A27, and they also related to footpath lighting.

The scheme will include a mixture of 7 one-bed, 34 two-bed and 28 three-bed homes as well as 107 car parking spaces and 132 cycle parking spaces. 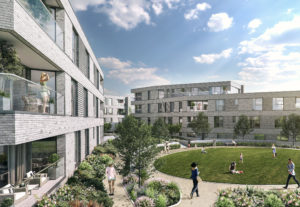 An artist’s impression of the Court Farm House scheme

The architects Conran and Partners said: “Court Farm House is the initial phase of one of the largest open sites allocated for development within the council’s City Plan.

“The council has acknowledged that the scheme’s 40 per cent affordable housing component is not visually distinctive or separate from the private market units and will be built to the same high standards of design and quality.

“The imaginative and sensitive design is configured as four separate buildings of three to four storeys, arranged around a series of open, green courtyard spaces.”

Although the site faces the South Downs National Park, a report to councillors said that the site would not have an adverse impact.

Conran partner and project director Lee Davies said: “We believe we have set a high standard of design for this very important and prominent site that will act as a catalyst for the wider development of Toad’s Hole Valley in the future.

“Our design is appropriate in scale to the site and seeks to minimise the impact on views from the South Downs.

“It also represents a landmark building on this important gateway site and will deliver much-needed housing on the city’s urban fringe.” 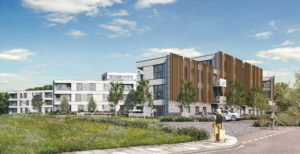 Mike Holland, chief executive of the site’s owner, Thornton Properties, said: “The council’s decision recognises the high quality of the scheme which responds successfully to the challenges of the site.

“I am confident that the sensitive redevelopment of Court House Farm – and the much-needed new housing it will offer – will help to transform this significant site on the edge of the South Downs.”

The developer is being asked for a payment – known as a section 106 contribution – totalling about £420,000. The money is expected to be spent on local schools, safe lighting and transport improvements.