The 120th anniversary of the grisly discovery of a woman’s skeleton in a drain at Preston Manor is being marked with a special event to investigate how she ended up there. 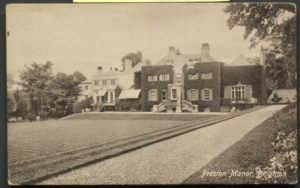 The discovery was made on Friday 29 January 1897 by workmen who were repairing the drains there – just a few weeks after a seance had been held there by spiralitualistic medium Ada Goodrich Freer and Douglas Murray, member of the then-famous Ghost Club.

The pair had been invited by the Stanford family who lived at the house then to deal with hauntings by ghosts, after many years of inexplicable phenomena.

The Stanfords had been troubled by inexplicable phenomena including silk dresses cut into diamond patterns and mysterious figures seen on the staircase.

During the seance on November 11, Freer said she was receiving messages from a nun called Sister Agnes who had been wrongly excommunicated from the church, and the haunting would stop if she was given a Christian burial.

By Christmas, bad smells had started to waft around the house which alarmed the family so much they moved out for a while, leaving only the servants, and orders for the workmen to investigate possible causes of the stench.

After the bones were foundunder the terrace outside the dining room (now the Macquoid Room) they were certified as being about 400 years old.

Freer persuaded the family they were indeed those of Sister Agnes and it’s believed the skeleton was reburied discretely by a local gravedigger. The ghost is reported to have made no further appearances within living memory.

The Burial Act of 1857 dictates that persons exhuming human bones must have the correct licence to do so and that all human remains must be reported to the Coroner’s Office.

There is no evidence the inhabitants of Preston Manor adhered to the letter of the law and thereby hangs an unsolved mystery.

This Saturday, almost 120 years to the day that the bones were found, Preston House historians and members of the Brighton Archaeological Society will discuss the case, using known historical evidence and newly researched material which has never been presented before.

The afternoon event costs £7.50 plus Preston Manor admission and free sherry & biscuits on arrival. Click here for more details of how to book a place.