Calls for fines for A-road litterbugs

Brighton and Hove councillors are urging the Government to grant them new powers to fine people who throw litter onto grass verges along A roads – and the funding to use them. 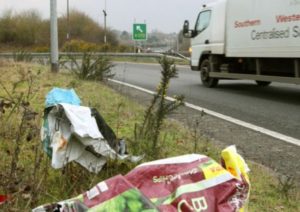 The move has come after the city’s Tory leader Geoffrey Theobald tabled a motion at last week’s council meeting calling on the council to write to the Government to introduce the powers, which are part of the Government’s leaked new Litter Strategy.

However, after the Greens proposed an amendment to the motion saying the council should also request funding, which was passed with support from the Labour group, the Conservatives refused to vote it through. However, with both Green and Labour support again, it was passed on Thursday night.

Labour’s deputy leader Gill Mitchell added: “In the spirit of unity, we will be supporting the amendment.

“We look forward to hearing more details about the Government’s litter strategy to see how it can keep the city clean.

But Conservative Cllr Tony Janio said that asking for funding was not needed, as just publicising the fact throwing litter is illegal would be enough to tackle the problem.

He said: “Don’t look at the number of fines, and the numbers of offences, just think of the publicity that people would know that this is illegal. We don’t need extra funding.

“Typically what’s happened is that the left, the far left and the left left have asked in their amendment for extra funding. We now can’t support this, we don’t need the extra funding, we just need the powers.”

in the meantime, Cityclean staff will be carrying out an extensive litter pick along the A23 and A27 this week, starting yesterday.

Permission for the clearing to begin has been granted by Highways England, who manage the roads, after an application was sent to them by Brighton & Hove City Council.

Cllr Gill Mitchell said: “It’s important that we keep our highways clear of rubbish. Not only does litter thrown onto roads create a safety hazard to other vehicles but it’s harmful to the surrounding environment and a threat to wildlife.

“Both the A23 and the A27 are main routes into Brighton & Hove and we should keep them clear to create a good first impression for people visiting the city.

“Keeping Brighton and Hove clean and tidy is hard work but the Cityclean team always do their best and provide great results.”