The Seagulls overpowered a languid looking Burton as Albion fans remembered the Fans United day of 1997. 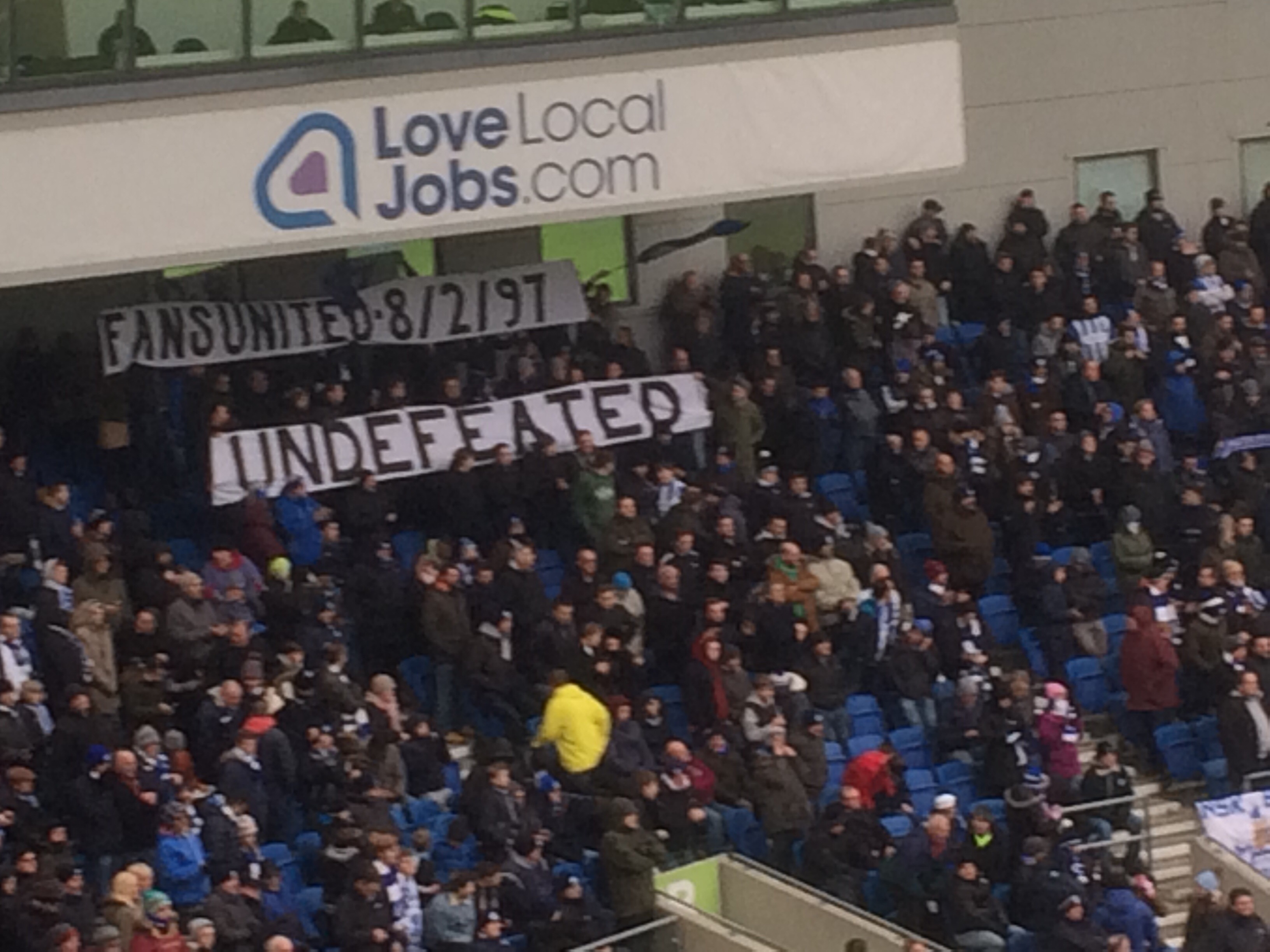 The Seagulls looked strong as Dale Stephens and Sam Baldock returned to the starting line up.

Albion’s initial concern during the early exchanges was an injury to Anthony Knockaert.

Burton midfielder Tom Flanagan appearing to leave his foot in on Knockaert’s ankle. However, the little magician was soon up to his old tricks weaving his way past three Burton defenders to fire in a cross that eluded everyone, until Tomer Hemed slotted home to put Albion in front.

It was cold and it was snowing a little. To the memory, the weather was similar to that day 20 years ago, as Albion were then roared on by over 8,000 fans from all over the world. Today over 29,000, most of them from Sussex, watched the Seagulls.

In 1997 it was about survival, not just Football League survival, but the club staying alive. Those five goals against Hartlepool were vital, as the club finished level on points with Hereford.

Today the Albion also have a healthy goal difference. Although by some quirk of fate, back in 1997, the Football League adopted a goals scored formula to separate those level on points. On goal difference Brighton & Hove Albion would have been relegated from the Football League and would be unlikely to be second in it today and pushing for the Premier League and getting closer every weekend.

Albion did little for the remainder of the half but a bit more than Burton. The visitors enjoyed some possession as Albion sat back. Solly March got into some good positions but the few crosses he put in, eluded Hemed and Baldock.

Marvin Sordell looked the Brewers’ liveliest player, although frustrated at the lack of service he received.

The Seagulls came out flying after the break, with March really testing the Burton defence from the off. His strong run to the byline and cross saw Sam Baldock flick home his 100th career goal to put Albion back in command. Seb Pocognoli merits a special mention for the brilliant lofted pass that sent March away.

Two up, the Seagulls looked more fluid. March was having an influence on the game and another weaving run saw him chopped down by John Mousinho. Hemed stepped up to slot the resulting penalty past Jon McLaughlin.

Three up and with one eye on the midweek home fixture with Ipswich, Chris Hughton made a triple substitution. Beram Kayal and Chuba Akpom waited an age to enter the fray. So long in fact that Glenn Murray, who was still tracksuited and warming up along the touchline while the other two were stripped and waiting with the fourth official, actually came on to the pitch with the other two. Stephens, Hemed and Baldock made way.

Burton suddenly got up a head of steam. Sordell forced another good save from David Stockdale.

The tables turned slightly as Shane Duffy, an absolute rock for Albion today, fouled Sordell. Micheal Kightly did well to get the ball up and over Albion’s wall and in off Stockdale’s right-hand post.

The Brewers threatened for a few minutes but Knockaert, swapping wings with March, fired in an inch-perfect cross for Murray to steer a header past McLaughlin.

At 4-1 business was concluded.

Akpom showed some promise and Lewis Dunk and Duffy were immense all afternoon. Towards the end Steve Sidwell tried to thread through balls for Akpom and Murray. But each time a last-ditch tackle came in.

It was a convincing win and an afternoon not short on nostalgia.

Richard Vaughan, who as a 15-year-old Plymouth fan instigated Fans United, was a guest of the club today. There were even a few choruses of “Build a bonfire”.

Instead of Bill Archer on the top, it was the Albion, the Brighton and Hove variety. Well for a couple of hours at least.

Next up, Ipswich Town on Tuesday (14 February) at the Amex.