Work to demolish a hospital building where patients have been treated for more than 100 years has begun this week. 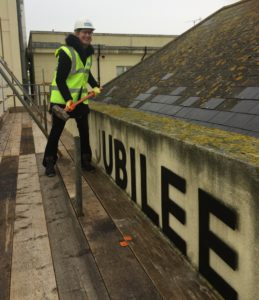 The beginning of the hard deconstruction of the Jubilee Building at the Royal Sussex County Hospital has been marked with a ceremonial hammer swing.

Nicki Colburn, the junior sister on the Oncology Ward, exchanged her uniform for protective gear to take the first swing at her department’s old building.

Accompanied by representatives from contractors Laing O’Rourke and H.Smith, Nicki climbed to the top of the scaffold surrounding the Jubilee Building.

Wielding a 2-kilo hammer with some skill she marked both the building and the official start of the hard deconstruction process.

After witnessing how much effort was involved in removing even a small piece of the building by hand Nicki said: “It now makes perfect sense to me why the building has to be taken down using a machine.

“In one way I am sorry to see it go because there are so many stories linked to it, but the age of the building made caring for patents harder. If we want new buildings, and I think everyone does, it makes sense to replace the really old ones.”

The oncology and infectious diseases wards moved out of the Jubilee Building in November of last year as part of the 3Ts Redevelopment’s Decant Programme.

Relocating from the 130 year old facility to the brand new Courtyard Building has already made a real difference to the experience of patients and staff.

The temporary building offers three times as much space per patient, plenty of storage, and 18 of the 22 beds are in single en-suite rooms. The wards will stay in the modular Courtyard Building until their accommodation is ready in the redevelopment’s two new, permanent buildings.

The Jubilee Building will be taken down using a long arm excavator which will remove one level of the building at a time, in small sections. The building’s materials will be removed from the hospital in covered containers.

The Jubilee Building is the largest structure to be taken down in preparation for the redevelopment’s Stage 1 Building.

It took its first patients in 1887 and was named in honour of Queen Victoria’s Golden Jubilee. The deconstruction will be completed in April of this year.