A car crashed through railings onto a school playing field this morning, close to where another car managed to crash through a school building’s wall last year. 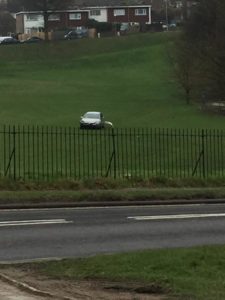 No arrests were made after the car careered out of control as it travelled along Carden Hill, smashing through railings by the junction with Cuckmere Way at about 1.040am.

No other cars were involved. A police spokesman said: “The driver, a 41-year-old local woman, was taken to hospital with minor injuries. No one else was hurt. There have been no arrests.

Last May, a car smashed a hole in the side of a building at Carden Primary School after it lost control in the early hours of a Saturday morning.

Firefighter cheered by crowd as he rescues trapped seagull