A new dog poo initiative hopes to cut the rate of fouling in half – with the use of glow in the dark posters. 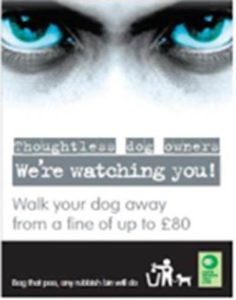 CityClean is going to put up the posters, which feature luminous eyes, around the city tomorrow evening.

The posters are provided by Keep Britain Tidy, and have been credited with bringing about a 46% reduction in pavement dog poo in other areas of the country where they’ve been used.

The watching eyes, which shine in the dark, are designed to act as a deterrent to dog owners reminding them to clean up after their pets.

Environment council Gill Mitchell explained: “Most incidents of dog fouling happen after dark when some dog owners feel that they can’t be seen. We hope these luminous posters will act as a deterrent, and encourage those irresponsible dog owners to pick up after their pets.”

Residents are also encouraged to call CityClean to report dog fouling. In October, it was reported that the city council’s new environmental crime enforcers, 3GS, had issued just one fine for dog fouling since they had started operating six months earlier.

Other posters informing dog owners that there’s no such thing as a dog poo fairy to pick up pooches’ desposits will be put up around parks and other locations where dogs are taken.

When dog fouling is cleared from pavements, street cleaners will mark the spot with a washable stencil. These stencils aim to send a message that dog fouling will not be tolerated and also reassure residents that their complaints are being dealt with.

Cllr Mitchell added: “Dog fouling is a major concern for many of our residents so we are very pleased to be working with Keep Britain Tidy, on this campaign.

“Other local authorities which ran the campaign have seen incidents of dog fouling almost halve, so we are hoping to see similar results here in Brighton and Hove.”

The campaign runs alongside the national Great British Spring Clean event (organised by Keep Britain Tidy) which will sees communities getting together to clean up their neighbourhoods.