Hove author publishes a guide to the hidden gems of Sussex

And he spoke about some of the amazing places on our doorstep including the Chattri memorial on the Downs overlooking Brighton.

The book includes Foredown Tower, in Portslade, with its camera obscura – which he described, to laughter, as the original i360.

The grand houses at Preston Manor and Stanmer Park are also in the book as well as the natural beauty of the Devil’s Dyke.

Mr Newman has written a number of previous books, including history text books. His general interest local books include Secret Brighton, Lewes Pubs and Brighton and hove in 50 Buildings.

Having been a full-time history teacher for 15 years, he loves bringing the past alive and runs historic and literary tours, including ghost walks. He even set up his own company, All-Inclusive History. 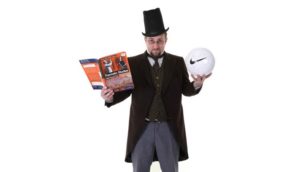 As well as being a GCSE history examiner, he also advises theatre and TV production companies on their historical plays and programmes.

Last night he put his presentational skills to good use at the Claremont Hotel, in Hove, and even managed a mention of his next book – about an 11-year-old who set up a school.