An investigation has started into a fifth-floor blaze at a hotel on Brighton seafront this evening (Sunday 4 June). 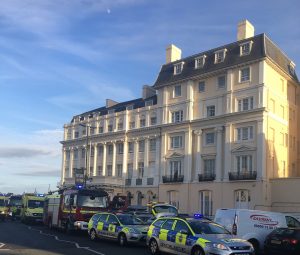 The fire service said: “East Sussex Fire and Rescue Service were called out at 7.12pm to the Royal Albion Hotel, in Old Steine, following reports of a fire on the fifth floor.

“Eight fire engines were sent to the scene, along with the aerial ladder platform and the control unit.

“Sixteen breathing apparatus were used by East Sussex fire crews whose swift response meant that the fire was out by 8.40pm.

“They carried out checks for hot spots and were damping down to ensure it does not re-ignite.

“As of 10pm, the operation has been scaled back and crews are leaving the scene. A re-inspection is planned later tonight.

“One person was rescued from a flat roof using the aerial ladder platform and was left in the care of the ambulance service.

“A full search of the property has been carried out and guests are being allowed to return to the hotel.”

Incident commander Tom Walby said: “The hotel evacuation went well and everyone has now been accounted for.

“This demonstrates the importance of having proper procedures in place and staff being trained to know what to do in an emergency.

“We would also remind people of the importance of reading safety advice when staying in hotels and checking the location of fire exits.”

He added: “We would like to thank West Sussex Fire and Rescue, South East Coast Ambulance and Sussex Police.

“All emergency services worked well together to ensure our joint response was as effective as possible.”