The odds have shortened on an unlikely outsider capturing one of the most marginal seats in the country at the general election tomorrow (Thursday 8 June).

But although the odds on Doktor Haze winning Brighton Kemptown have dropped from 500-1 to 150-1, serious punters are unlikely to be rushing to the bookies to place a bet on him.

The creator and ringmaster of the Circus of Horrors said: “I don’t think for a minute that I will get enough votes to become a Member of Parliament.

“But nor did I think Brexit would happen or that Donald Trump would become President of the United States. 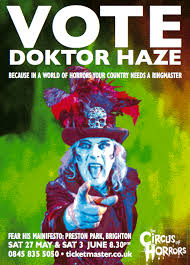 “We live in a crazy world that could get crazier. As the gap between Labour and the Conservatives  closes, something strange is happening in the constituency of Brighton Kemptown.”

Despite appearances, Doktor Haze, said that he was genuinely interested in politics and was a friend of the late leader of the Monster Raving Loony Party, Screaming Lord Sutch.

He described himself as an alternative candidate and said that his manifesto was a mix of the serious and the quirky.

He called for better funding for the NHS and for more affordable housing to be funded and built as well as proper protection for the environment.

In the referendum last year he voted Remain but respects the result and said: “What I am sick of though is all this talk of a hard Brexit or a soft Brexit or in some cases no Brexit.

“Immigration cannot end and it is foolish to believe it can. Without foreign nationals the UK we would come to a standstill. What is important is if people come to the UK they must have a job first and will not receive benefits.”

Doktor Haze said that he would ban whips in Parliament – the term used to described the people in each party who persuade MPs to vote with the leadership.

He said: “I would campaign to stop party whips. If if politicians want to use whips then do so in their bedrooms or in fetish clubs – not the Houses of Parliament.”

He wants to celebrate quirkiness, ban people from wearing band t-shirts until they own at least four albums by the group in question and force panto chiefs to employ real dwarfs rather than children.

He has strong views about the music played on a typical 70s night – preferring T-Rex to “the dreaded Abba”.

Halloween should be a bank holiday, he said. Anarchy in the UK should be the new national anthem and “anyone who gives blood would get a free ticket to see the Circus of Horrors”.

With the shortening odds, he said: “I have always had an interest in politics but didn’t think for a minute that I could actually win – that is, until now. An upset could be in store.”

Doktor Haze is up against Simon Kirby, the Conservative candidate who won the seat in 2010 and held it with a majority of 690 in 2015, local Labour councillor Lloyd Russell-Moyle and Emily Tester for the Liberal Democrats.

Mr Kirby remains the favourite, according to the betting website Oddschecker, although the site’s political pundit said that the shifting odds reflected a belief that Labour could pull off a win.