The new station for Volk’s Railway on Brighton seafront was due to be lowered into place by crane today but wind delayed the move.

The Aquarium Station was sat – in three modular blocks – waiting for the wind to die down so that they could be placed on their foundations near the Palace Pier and Sea Life Centre. 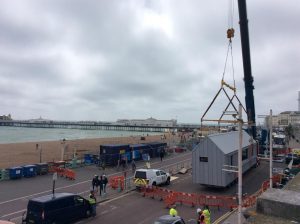 All three units were lifted into place once the wind dropped at 8.30pm. As expected, the unloading and delivery took just two and a half hours once the windspeed fell.

The new station is part of a £1.65 million restoration of Volk’s Railway and is one of the initiatives forming part of Brighton’s £1 billion seafront regeneration plans.

Council leader Warren Morgan said: “It’s great to see progress with yet another project, this time east of the Palace Pier, in addition to everything going on to improve things on the seafront.

“We must easily have the busiest seafront in the country in terms of investment.”

The Heritage Lottery funded restoration includes a purpose-built and contemporary-looking visitor centre inside the station to tell the story of Magnus Volk and his Victorian railway – the world’s oldest electric railway.

The scheme included the refurbishment of three original train carriages and the installation of a new conservation workshop alongside the train tracks.

The new Aquarium Station is a modular building designed by ABIR Architects from Hove and produced by Boutique Modern, which has a factory in Newhaven.

It replaces a slightly smaller timber shed. The refurbishment of the station and tracks has been the first disruption to the tourist attraction since the Second World War. 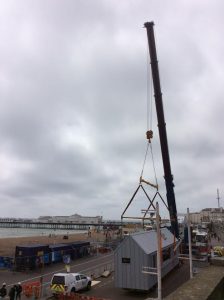 It is hoped that the reopening of Volk’s Railway will boost the Madeira Drive side of the seafront where Brighton and Hove City Council aims to raise £4 million to save the Madeira Terraces.