A Brighton man is being hunted by police so that they can return him to prison.

Sussex Police said: “Police wish to trace Dean John Keily, 34, from Brighton, who is wanted on recall to prison after breaching the terms of his licence for early release. 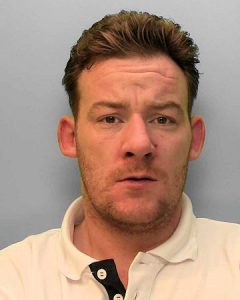 “Keily was serving 140 days for driving while disqualified, a sentence imposed by South London magistrates on (Monday) 20 February.

“He had been released on licence from HMP High Down, Sutton, Surrey, on (Friday) 28 April but after breaching its terms the licence was revoked on (Wednesday) 24 May and Keily must now return to custody.

“He has family in Brighton but also has Surrey connections in Croydon and Sutton.

“He has a distinctive scar on his right cheek, running from his nose to his ear, another between his eyebrows and a 1in (2.5cm) scar on his forehead.

“Anyone seeing Keily or knowing where he might be is asked to contact Sussex Police by email at 101@sussex.police.pnn.uk, online at https://sussex.police.uk/appealresponse or by phoning 101, quoting serial 1117 of 24/05.

“In an emergency, please telephone 999.”