A 22-year-old explorer who has tried to climb Mount Everest twice opted instead to head up Ditchling Beacon on Sunday (2 July).

The ascent was part of Alex Staniforth’s Climb the UK challenge during which he expects to climb the equivalent of Everest more than 13 times. 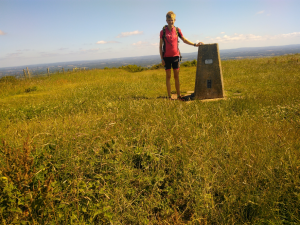 Mr Staniforth is cycling 4,782 miles, walking 484 miles and kayaking five miles with the aim of reaching the top of the highest point in every county in the country.

In doing so he hopes to raise money for Young Minds UK, the mental health charity for children and young people, and to enccourage people to talk more about mental health.

Mr Staniforth has been travelling around Britain since starting his Climb the UK challenge in May, during Mental Health Week.

On Sunday he climbed Ditchling Beacon in East Sussex and Black Down in West Sussex.

Mr Staniforth said: “Mental illness is the hardest thing I have ever had to deal with – far more difficult than climbing Everest.

“Everyone has their own mountain to climb and my big message over the next few months is that if you’re suffering from mental health issues, please speak out. Tell someone you trust. Visit the Young Minds website and seek help – it’s not a sign of weakness. Talking about it is a sign of strength.”

Mr Staniforth’s two attempts on Everest were thwarted by avalanches. While he survived both, three of his colleagues died in the second of the avalanches in 2015.

Mr Staniforth’s book about the ordeal, Icefall (Coventry House Publishing, 2016), was published to acclaim from fellow explorers such as Bear Grylls and Mark Wood.

He has since given talks about his experience and his mental health and has appeared as an inspirational speaker at schools around the country.