A group of young refugees designed and made kites for the Brighton Kite Festival to celebrate a fusion of culture and life experience.

The Moving Horizons project worked with eight young refugees aged between 10 and 18 “to inspire (them) to have access to a creative process with an outcome that was uplifting, freeing and positive”. 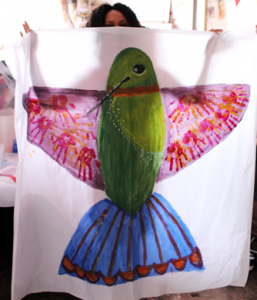 The initiative was run by Articulate, a Brighton-based arts charity which also carries out international work with over 300 children a week, partnering with NGOs (non-governmental organisations) across the world.

Articulate partnered with the Hummingbird Project in Brighton and Hove to create Moving Horizons after working together last summer to help children in the unofficial refugee camp in Calais, France.

Articulate also recruited children from the Brighton Table Tennis Club, which works with refugee groups in the city, and Brighton and Hove social services.

The majority of the children in the project were unaccompanied minors now living in foster care across Brighton and Hove.

Nour, an 11-year-old refugee from the civil war in Syria, is living in Brighton with her family – and her brother joined her in Moving Horizons.

When final preparations were under way for the big day, Nour said: “I have never flown a kite before and I can’t wait to fly one that I have designed.”

The children’s creative visions guided the project, with professional artists responding to the children’s wishes. They taught them a wide range of techniques from painting to mixed media.

The children produced a wide variety of bright, bold and highly creative kites which were greatly admired at the Brighton Kite Festival in Stanmer Park.

Here are a couple of videos tweeted from the kite festival.