Hundreds of neighbours have objected to revised plans by developer Crest Nicholson to build 125 homes in Mile Oak.

Crest’s original scheme to build a new street behind Overdown Rise was rejected by councillors in April by the Brighton and Hove City Council Planning Committee. 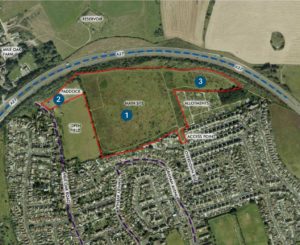 But the developer submitted an amended version of its plan in the hope of addressing the formal reasons for turning down the outline planning application.

These included the effect on surrounding roads, the harm to the ecology including threats to endangered species, transport and parking displacement, flooding, including from surface run-off, and sustainability.

Crest said that in the amended scheme the only road to the new estate would be from Overdown Rise – with access on foot and by bike only from Mile Oak Road.

And it said that it was making money available to widen Fox Way, by the A293 link road roundabout, making local traffic problems better rather than worse.

Despite the changes, hundreds of letters of objection have been sent to the council about the plans for the 22-acre site.

North Portslade ward councillor Peter Atkinson said: “I will examine this application, as I did the last, and also consult local residents on their views.

“My major concerns last time were around traffic congestion and flooding so I will be looking to see if these issues have been addressed.

“I would also be hugely concerned with the potential level of disruption caused to residents in this part of Mile Oak during construction.”

Crest said that its application met the requirements of the council’s planning policies and would provide much-needed homes.

An assessment by the council estimated that the site, next to the A27 Brighton bypass, could take as many as 280 new homes.

The developer said that 40 per cent of the homes on the site would be classed as “affordable” – in line with council policy.

It added: “The proposals include mitigation and enhancement measures in relation to the Site of Nature Conservation Importance.”

It also aimed to show that robust drainage measures would minimise the risk of the sort of flooding seen in the area in the past. 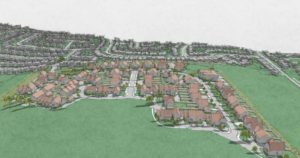 The company was prepared to pay a “developer contribution” – also known as “section 106” money totalling more than £1.5 million.

The money would go towards the cost of school places, “pedestrian and public transport infrastructure improvements” and sport and open spaces.

The scheme included parking for 157 cars and 192 bicycles, with 40 visitor car parking spaces and 12 disabled bays.

The buildings would be two storeys high with a mix of one-bed flats up to four-bed semi-detached and detached houses.

The council aims to decide the application by mid-October.