A convicted fraudster from Brighton, who uses sob stories to scam her victims, is being hunted by Sussex Police.

Andrea Thorne, 31, of Percival Terrace, Brighton, is wanted on suspicion of fraud and of breaching a two-year criminal behaviour order imposed by Brighton magistrates earlier this year for previous fraud offences. 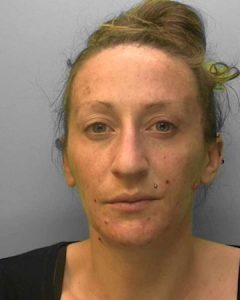 Sussex Police said: “The order prevents her from asking people in Brighton and Hove for money but both before and since her sentencing officers have had multiple reports of Thorne approaching people and doing just that, mainly in the city but also further afield across Sussex.

“Typically Thorne asks for between £20 and £30, saying that she’s been visiting a relative in hospital, her car has broken down and she needs cash for a bus, taxi or train fare home.

“She then either provides false personal details or takes contact details from the victim, promising to return the loan but never doing so.

“Thorne is now liable for arrest for fraud offences and for breaching the court order, and could be sent to prison.

“Anyone asked for money by Thorne or witnessing her asking for money, should contact police immediately on 999, quoting serial 47170078934.

“Sightings of Thorne, information as to her whereabouts or details of previous scams can be reported online or by phoning 101, again quoting serial 47170078934.”