A “modern vintage” shop is to become the first tenant at the revamped Hanningtons Estate in the centre of Brighton.

Cath Kidston, which currently has premises in East Street, has signed a lease for a ground floor sales and storage area totalling 1,700 sq ft at 6-7 North Street.

The unit is part of the Hanningtons Estate being revamped by the investment management business Redevco.

Work started in February on the 1.3-acre estate which includes the site of the old Hanningtons department store.

The masterplan for the estate includes the creation of a new lane, a new entrance to The Lanes from North Street and the redevelopment of existing buildings.

Redevco’s portfolio director Andrew Foulds said: “Our vision for the North Street element of Hanningtons Estate was always to take the existing premium retail offer found within East Street and extend it up North Street, so it is fitting that we have attracted Cath Kidston as our first retailer.

“The brand had outgrown their existing store and this deal offers them a prominent site in a great location.

“We are in advanced discussions with some exciting new brands to Brighton, not just for North Street but for the smaller units within the new Hanningtons Lane.”

Cath Kidston commercial director Sue Carvell said: “We’re very excited to announce our new store opening at 6-7 North Street, Brighton, reflecting the success that we have seen in the area since we opened our original store in East Street in 2011.

“Our new, convenient one-floor store will allow us to showcase even more of our exciting new product offering including our growing kids department in a prime location to our local customers.”

Redevco said: “Work is progressing well at Hanningtons Estate and we are excited to announce that we are just 12 months off completion.

“By the end of summer 2018 Brighton will have a new lane and new spaces for shops, restaurants and cafés.

“Following the demolition of Timpsons and work to reveal and restore the historic 17th century Puget’s Cottage, Redevco’s contractor Westridge has now started to refurbish Huntingdon House in North Street.

“The strategy for Huntingdon House is a two-phase approach and work is well under way on phase one which is the comprehensive cosmetic overhaul and redecoration of the upper parts of the building and canopy. 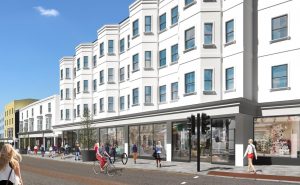 “Phase one will also include the installation of a large vertical sign to direct customers through into The Lanes from North Street.

“The signage will provide a highly visible link from the North Laine to The Lanes to encourage cross movement of pedestrian traffic.

“Dependent on ongoing retailer discussions, phase two is likely to include new shop fronts and the installation of a new glazed frontage on the corner of Meeting House Lane.”

Mr Foulds said: “Our masterplan approach should provide a catalyst for the whole area.

“We have also demolished a building at the rear of the site and reconfigured some existing space but people should start to see significant investment and improvements over the next few months.

“Signage is incredibly important to retailers already in Meeting House Lane and beyond so we are looking forward to getting larger, bolder and more permanent wayfinding signage installed as soon as possible.”