A newspaper report has highlighted challenges facing organisations such as Brighton and Hove City Council as public policy aims to drive more people to switch to electric cars.

The biggest obstacle to buying an electric car is having no off-street parking at home, according to the report in the Financial Times today (Thursday 28 December).

About 43 per cent of British homes lack off-street parking, according to National Grid estimates, although the percentage in Brighton and Hove is believed to be significantly higher.

Electric car owners relying on public charging points have a growing but limited number of options.

According to the Charge Your Car website Brighton and Hove has just 20 public charging points. Half of them were put in place by the council.

The Electric Brighton website and some “zap maps” include more. electric Brighton said: “There are a total of forty-seven public charging points at fourteen locations around the city.

“The majority of charging points don’t charge for the electricity used, allowing for some of the cheapest motoring available.

The government has given grants to rail companies of up to 75 per cent of the capital cost up to £7,500 for each charging point that they instal in station car parks.

Brighton and Hove Buses, the Big Lemon bus company and local taxi operators are among the early adopters and have their own electric charging facilities.

They have been helped to make the transition with public money although Brighton still has air pollution problems, predominantly on roads dominated by buses and taxis.

The government wants to ban the sale of new petrol and diesel cars from 2040 but sales of electric vehicles have been hampered by the lack of charging points.

A related worry for drivers is range – how far they can go before having to recharge their battery.

But if electric car ownership starts to soar, other challenges will also need to be addressed, the FT said, such as the risk of local power networks suffering power shortages. 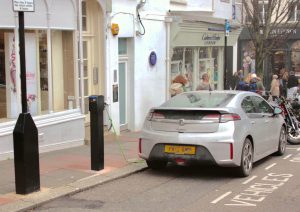 The report looks at using existing street furniture such as lampposts as potential charging points while flagging up trip hazards and, with older lampposts, heritage objections.

It flags up the potential use of induction pads or battery swaps and looks at where charging capacity could be added easily and be accessible.

There are, the FT said, cost implications for employers although – in terms of time – it makes sense for drivers to charge their cars while they’re at work.

Smartphone apps are making it easier for electric car drivers to find charging points – and check whether they’re in use and how much they cost.

But the experience in Brighton and Hove points to plenty of obstacles on the road ahead if Britain is to switch from petrol and diesel and make real our electric dreams.