A Brighton school has submitted a planning application to build a new sports hall and create an all-weather pitch.

It said that it was now “one step closer to transforming its sports facilities to benefit thousands of children and the local community”.

The application is supported by the Sussex Cricket Foundation, Albion in the Community, Patcham United and Brighton Table Tennis Club.

The sports hall has been designed to Sport England specifications and will be big enough for four badminton courts as well as basketball and volleyball courts.

A variety of sports will be played on the full-sized 3G pitch, including football, rugby and hockey.

Both the sports hall and the all-weather pitch will be accessible to wheelchair sports.

Head teacher John McKee first floated the idea of a sports hall more than a year ago.

To try to alleviate any possible concerns about the scheme, the school spent 2017 listening to and consulting with the local community.

Mr McKee said: “Patcham High has always been at the heart of the local community. We know how much local people, as well as our pupils, will benefit from this.

“We have also listened to any concerns raised and adapted our plans accordingly.”

Two of the concerns raised in the consultation were possible noise from the 3G pitch and glare from the floodlights. In the latest plans the pitch has been lowered a metre and a half, and a wooden acoustic screen has been incorporated to create a noise barrier for houses nearest the school playing fields.

The pitch will also be surrounded by an anti-rattle fence to reduce the noise of balls hitting the fencing.

To minimise any possible glare from the eight floodlights which will illuminate the 3G pitch, the school has employed a lighting company which specialises in controlling light spill.

One of the biggest grass-roots junior football clubs in Brighton is backing the development. Patcham United was founded in 1992 and currently has more than 200 boys and girls from six to 16 on its books.

Vice-chairman Phil Lewis said: “Finding training and playing facilities within the local area to be able to accommodate all our teams and age groups can be a real challenge.

“The implementation of these new sports facilities within Patcham High School would be of great benefit in providing all weather training facilities for all the children connected with the club.

“We look forward to working in partnership with the school to help complete the sports hall and all-weather pitch.” 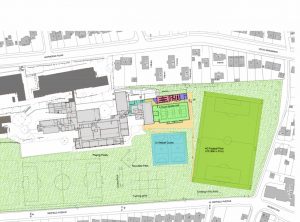 Albion in the Community has a close working relationship with Patcham High and is another sporting organisation in the city supporting the planning application.

Schools manager for Albion in the Community, Paul Williams, said: “Now more than ever young people in the community need access to high quality, affordable and local sporting facilities to ensure they live active and healthy lifestyles.

“Increasing the provision of sporting opportunities available to students during the school day but also the wider community outside of school hours is to be welcomed.”

To create space for the sports hall and the 3G pitch the current netball courts and cricket nets will be relocated.

Patcham High is confident the development will not lead to any parking problems in nearby streets as the school already has spaces for nearly 60 cars.

The hall and pitch will be open until 9pm on weekday evenings and from 8am to 3pm at the weekends.