War Horse impresses with a fine pedigree and a moving tale

The National Theatre has opened its spectacular touring production of War Horse in Brighton to a full house and well-deserved deserved standing ovation this week.

The Tony award-winning fusion of large-scale puppetry with traditional theatre, which premiered at the Olivier Theatre in 2008, is based on Michael Morpurgo’s heart-rending book of the same name, and is adapted by Nick Stafford.

It tells the story of the First World War following the life of a horse, Joey, raised from a colt by young Albert – here played with wonderful emotional range by Thomas Dennis – on a Devon farm, before being sold to be an officer’s horse in the cavalry in France.

Albert joins up to try to find his beloved horse, who meanwhile is captured by and in turn captures the hearts of the German soldiers who find him.

The action is brought to life by huge puppets, created by the Handspring Puppet Company, many requiring three or more puppeteers to manipulate them.

They are beautifully lifelike despite there being no attempt to hide the puppeteers, which is testament to their enormous skill.

The spell remained unbroken throughout the nearly three hours running time – no mean feat given the weight of the puppets.

The large cast play many roles, often raising their voices in exquisite harmony to evoke a lost world of West Country village life and the innocent boys who marched off to “give Gerry what for” – so many of whom never came home.

The war scenes are a maelstrom of explosions, strobe lighting, gunshots and grim projections of barbed wire and scraps of maps and letters from the front, which combine to disturbing and sometimes overwhelming effect, indicating that this is a puppet-show clearly not for children – and indeed I was glad I had not brought a child younger than 12, not least because the running time came to nearly three hours with the interval. 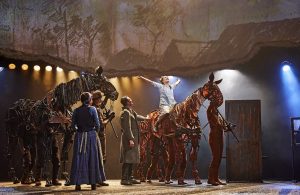 It has been lovingly adapted from the book, and its loyalty to Morpurgo shows: my only quibble was that I felt some of the twists and turns of the story line were too involved for the stage, and it could perhaps have been edited for greater clarity of narrative.

This show has been widely praised, and rightly so. A near flawless production, a masterclass in puppetry and spellbinding theatre, and an example of world class theatre: go – and prepare to be moved.