A Hove supermarket is to offer extended parking after holding talks with local traders.

Tesco has offered the compromise a year after it ended free parking for two hours at its store in Church Road, Hove. 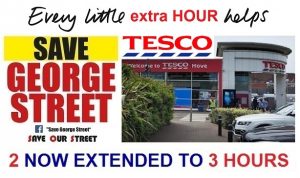 Traders in George Street said that footfall and takings had been hit by the supermarket’s parking rule change.

And the Save George Street campaign lobbied Brighton and Hove City Council to get involved in the dispute.

The campaigners said: “The Save George Street campaign is pleased to announce that Tesco has agreed to extend the time people can park in their car park by adding another hour.

“The two hours for £5 minimum spend has now been extended to three hours for £5 for a three-month (12-week) trial period starting from the (Friday) 16 February.”

The Save George Street campaigners said: “The change means that the people of Hove can shop in Tesco and now have that extra time to explore the shops and cafés in George Street.

“The £5 spend in Tesco, which shoppers can use for essentials, equates roughly to £1.66 per hour for the three-hour parking period. 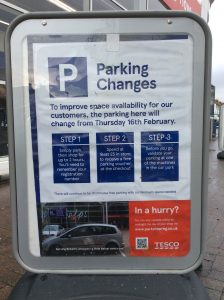 “Both George Street and Tesco share some of the major problems that the community as a whole face and in partnership hope to try and resolve these problems making the area a better shopping experience for the community and for visitors to the street.

“Save George Street, working with Central Hove ward councillors Clare Moonan and Andrew Wealls had a very successful meeting with Tesco’s manager Michael Germain and hope that it is the beginning of a successful working relationship in the future.”

Mr Germain said: “The introduction of verification in our car park over the last year has had a very positive impact on customers of the store, who find it much easier to park.

“Having discussed the potential positive impact on the local community of an increase in the stay time of the car park, with local traders and councillors, I am very pleased that we are now able to trial such an increase for the next 12 weeks.

“The stay time has been increased from two to three hours.

“Park free for 30 minutes – and then scan the voucher given to you at the checkout when you spend £5 or more to park for up to three hours in total.

“We look forward to reviewing the results of this trial in due course.” 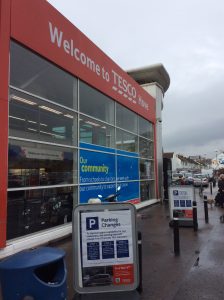 Councillors Wealls and Moonan said: “We are really pleased Tesco can support George Street businesses by offering this trial period of an extra hour’s parking.

“They have been very constructive in their discussions with us and the Save George Street campaign on behalf of the George Street businesses and they are very keen to help sustain a vibrant shopping community around their store.

“We encourage Tesco customers to make great use of the extra time by visiting nearby shopping streets.”