Albion are heading in the right direction, Hughton tells Brighton and Hove News

By : Tim Hodges from the pre-match press conference
Comment: 0

Brighton and Hove News caught up with Albion boss Chris Hughton on Thursday lunchtime and suggested to the Albion boss that the current Seagulls team might be the best he has ever managed. 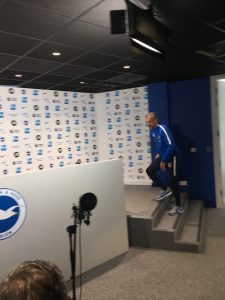 The Premier League Manager of the Month was non-committal and referred to his successes at Norwich and Newcastle.

But he told @BHcitynews that he had seen relationships flourish in the three years he had been at the club and that success was gauged on league position.

He went to say: “There is a good feel with this group (of players) at the moment and lot of competition for places and I think we are heading in the right direction.”

The Albion boss also said that confidence was high prior to the trip to Everton with Albion preparing to play at Goodison Park for the first time since 1982.