Council staff are being asked to wear special badges announcing their preferred pronouns so that members of the public don’t assume their gender. 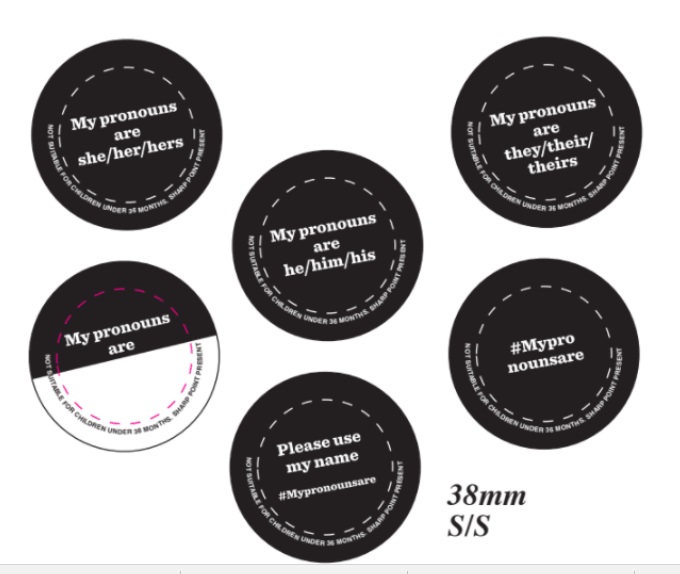 The initiative – first published in Buzzfeed on Tuesday and on which staff were briefed yesterday, International Women’s Day – will see 16,000 badges printed at a cost of £1,800 and distributed to council staff, residents, and community and voluntary sector workers.

Some of the badges will ask people to refer to the wearer as she/her or he/him or they/their and others will have a space left blank for wearers to write in alternative preferred pronouns. Although this will be up to the individual, some alternative pronouns in use by the genderqueer community worldwide are ze, sie, hir, co, and e.

The project, which is being launched later this month to mark Trans Day of Visibility on 31 March, is organised and funded by the council, the Clare Project and Trans Alliance, the council’s LGBT Workers Forum, local NHS trusts, the University of Brighton and Sussex Police.

Cllr Emma Daniel, chair of the neighbourhoods, inclusion, communities and equality committee said: “We all define our own gender and we should respect other people’s identities, and rights.

“Now there is more freedom and safety to be ourselves. But there’s still more to do.

“Who a person is may not match what you expect and may not be defined easily. If someone’s pronouns differ from what you assume, it’s for you to adapt and it’s okay to ask.

“We’re proud of being a diverse city, and the council is committed to equality and inclusion for all people including our trans and non-binary residents.

Council staff were emailed yesterday – the day after the initiative was published in Buzzfeed – to tell them about the initiative, with a “full briefing” promised at a later date.

The email said: “The badges will be voluntary to wear and no-one will be expected to wear them if they don’t want to … We hope that as many staff as possible join in the campaign, celebrate our diverse city, and help raise awareness of trans and non-binary people.”