A four-year-old boy from Hove and his mum are among the stars of a carpool karaoke style video to mark World Down’s Syndrome Day. 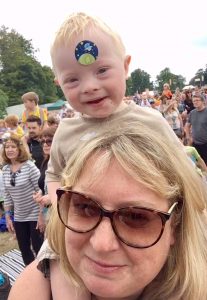 It all started among a group of proud parents, who say that they have been told across the media this past year that children like theirs would be better off ‘screened out’.

Another mum of a four-year-old who has Down’s syndrome saw a carpool karaoke video signed with Makaton.

She thought it would be amazing to replicate the idea with other mums and their young children who also have an extra chromosome.

The song in question is from the multiplatinum soundtrack to the Twilight films – A Thousand Years by Christina Perri.

And the mums are all part of a Facebook group called Designer Genes which was set up for parents who have a child with Down’s syndrome born in 2013-14.

The idea for their video was inspired by Singing Hands, a British organisation whose videos have helped many parents and youngsters learn Makaton.

Makaton is designed to help hearing people with learning or communication difficulties, using signs and symbols alongside speech.

The video idea became a reality and before long more than 50 mums had filmed themselves in their cars and uploaded the results.

When a dad in the group pulled all those clips together, the result proved moving. It’s been described as “a guaranteed positive tear-jerker that visualised every conceivable message about disability, diversity and inclusion without having to say a word”.

Within 24 hours of the first draft being posted in secret – and behind a password – it notched up 1,500 views. Within four hours of going public on YouTube, in the small hours of the morning, 1,600 more views were recorded.

The group knew that it had a potential hit for the upcoming World Down’s Syndrome Day #wdsd18 – an annual worldwide awareness day on Wednesday 21 March.

The group’s members hope that sharing positive messages will help dispel myths about the condition which is also known as Down syndrome, Trisomy 21 or T21.

Stef Fallows said: “We believe this video really does have the potential to be the most viewed across the world on World Down Syndrome Day this year, so we urge everyone to share, share, share to help us make it a success.”

It was shared in advance of this year’s World Down Syndrome Day and seeks to popularise the social media hashtag #wouldntchangeathing – because that’s exactly what 97 per cent of people with Down’s syndrome and their families report.