Dozens of children and parents had a lesson in local democracy this afternoon after councillors from all three political parties united to find school places for “the misplaced 38”. 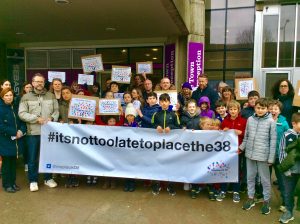 All 38 children live in the catchment area for Dorothy Stringer and Varndean secondary schools, in Brighton, but were told they would have to go elsewhere from September.

Some of the children and their parents demonstrated outside Hove Town Hall shortly before the situation was due to be discussed at a Brighton and Hove City Council meeting today (Thursday 29 March).

They wanted some of the £15 million budget for “additional secondary provision” to be used to fund extra places at Stringer and Varndean.

They heard heated exchanges as Conservative. Labour and Green councillors came up with similar proposals at the council’s Policy, Resources and Growth Committee.

Eventually the three parties hammered out a deal, acknowledging the speed with which officials and the schools themselves will have to respond.

After a unanimous vote, one parent Clair Letton-Marshall said: “This is a great result. This is everything that we hoped for.”

She lives an equal distance from Stringer and Varndean but daughter Ava, 11, a pupil at Downs Junior School, was allocated a place at Hove Park.

Clair Letton-Marshall said: “She just wants to be able to go to school with her friends.”

Earlier another parent, Karen Hmaimou, whose daughter Anya goes to St Luke’s Primary School, said: “She’s been allocated to Longhill. She’s the only girl in her class and one of only two girls in the school to be sent there, as well as a few boys she’s not friends with.

“She’s devastated that she’s been singled out to be sent to a school and a community that she doesn’t feel part of.

“Her brother’s in year 11 at Stringer and she’s missing the sibling link by just a few days.

“We have been to see it and we were impressed by what we saw. It’s a school which is really turning itself around. But that’s not the issue.

“She’s being separated from her friends at quite a difficult time. They should be with their network of friends and have that support.

“We are campaigning in the hope Dorothy Stringer will be able to take in these 38 students.

Those changes would have seen parts of its catchment moved to the Longhill catchment from next year.

She added: “We are optimistic that we can persuade them (councillors) to fund a solution.” 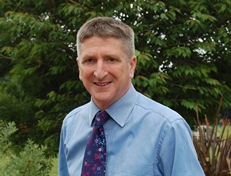 Also speaking before the meeting, Richard Bradford, head teacher of Dorothy Stringer School, said: “Both schools want to support our community and have offered to take more students in future years.

“Varndean School have been able to make internal modifications this year to allow them to admit additional pupils in September 2018.

“Dorothy Stringer cannot take more students this September without more accommodation being made available by the council.

“We need extra teaching spaces and added capacity to general areas, especially catering facilities, which cannot be delivered without the necessary design works, permissions and construction, which are planned for delivery by September 2019.

“Increasing student numbers takes significant planning to ensure we do not have a detrimental effect on the education of our students.”

Pinaki Ghoshal, the executive director of children’s services, told councillors that he had had an informal conversation with Mr Bradford earlier.

If the governors agree, funding would enable the school to take the extra pupils in September.