Former Brighton schoolgirl Anna Campbell died in a Turkish air strike on Thursday 15 March in Afrin in Syria. She was 26. 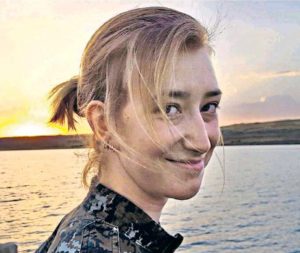 Anna, from Lewes, had travelled to Syria to join the Kurdish fight against ISIS because she was horrified by reports of their atrocities against the Syrian people and religious minorities.

Appalled by ISIS’s assault on women’s rights and reports of mass rape and sexual slavery, she joined the YPJ, the all-female militia affiliated to the Kurdish People’s Protection Units (YPG).

Throughout the war, these male and female Kurdish ground forces – backed by US and Russian air strikes – have played the key role in repelling ISIS.

Battle-hardened, highly disciplined and committed to democratic and women’s rights, they are accepted as allies by the UK, the USA and the Russians.

However, Turkey, fearful of an independent Kurdistan, views them as a terrorist force.

Despite Turkey’s status as a NATO ally, there have been persistent complaints that its deeply conservative Sunni government has done little to assist the fight against either the jihadis of ISIS or the other Al Qaeda affiliates in the region – and that it has in fact covertly supported them while impeding the Kurds’ efforts.

On Saturday 20 January, with the West’s attention focused on the Syrian and Russian bombardment of Ghouta, Turkey launched a ground and air offensive into Syria to oust Kurdish forces from Afrin.

Kurdish forces were redeployed to defend the town, though lacking air support from Russia or the USA, the odds were terrible.

There were warnings that Turkey’s actions would allow ISIS to regroup and reassert control of Syrian territory that ISIS had previously invaded, putting vulnerable minorities like the Yazidis at risk of further atrocities.

There were predictions of widespread civilian deaths and a refugee crisis. 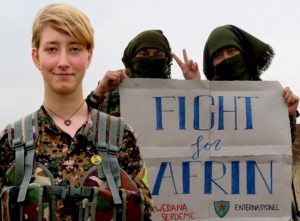 The situation could hardly have been more dangerous yet Anna Campbell begged her commanders to let her go to defend Afrin. Eventually, reluctantly, they did.

She died with two other female comrades at the hands of our NATO ally on Thursday 15 March.

When Anna’s death was first reported I looked at her photograph and thought how near in age she was to my own daughter.

Gazing at her fresh and open face, I thought how like she was to girls I had seen at my daughter’s old school, St Mary’s Hall, in Brighton. I almost thought I recognised her.

It turned out that I did. When my daughter saw Anna’s photograph, she confirmed that in fact Anna had been at her old school, just one year ahead. 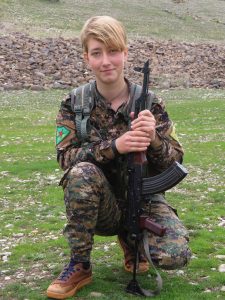 I cannot imagine the pain of losing a beloved daughter and sister and to lose her violently and at the hands of a government that is supposedly our ally.

Her family say they have been able to draw some comfort from the fact that Anna was fighting for what she believed.

It may also give them some ease to realise that in the publicity surrounding her death, she has managed to highlight issues that politicians and the media have preferred to ignore.

Many people reading about Anna’s death, will have learnt for the first time that the Kurds are our allies, the only effective ground force in a war against a brutal enemy that threatened and threatens both the Middle East and Britain.

And that against an enemy that despises women, the Kurdish forces have deployed thousands of women soldiers, many in senior leadership positions, who have played a key role repelling ISIS and promoting equal rights.

Shamefully, the Foreign Office has not condemned the Turkish attack on Syrian Kurds, nor Turkish threats to widen the assault to areas such as Sinjar, where Kurdish forces are protecting minorities such as the Yazidis.

Instead, the Foreign Office has stated that “anyone” from Britain who goes abroad to fight risks arrest on their return – without any regard for whom they may be fighting. 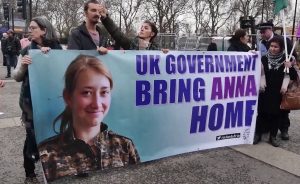 The BBC has ignored recent reports of Turkish atrocities in Afrin while highlighting Turkey’s view that Kurdish troops are terrorists.

Political cowardice and media dishonesty cannot alter the reality that, throughout this conflict, the Kurds have been our stalwart ally against a genocidal enemy.

Or the shameful fact that this small, stateless and beleaguered community took up arms against ISIS when Britain had not the courage or resolve to do it.

Much as our political leaders may suggest it, there is no moral or political equivalence between British Salafists who have volunteered to fight alongside islamo-fascist groups like ISIS and Al Qaeda and those British men and women who have taken up arms against them.

Unlike their opponents, the male and female Kurdish militia have defended human rights and have empowered and protected vulnerable communities.

Anna Campbell fought and died in defence of democracy and what the Kurds call a ‘women’s revolution’. She was a hero and a patriot.

We should support her father’s call to bring her body home.