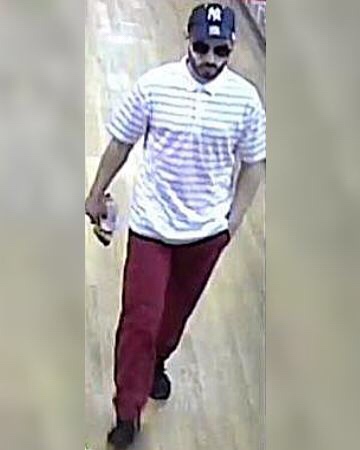 Sussex Police said this afternoon: “Police have released this CCTV image of a man they want to talk after an attempted robbery at the post office inside WH Smith in Brighton.

“The suspect went into the store in Churchill Square on Monday 16 April just after 5.10pm and passed a note over the counter at the post office inside demanding that the cashier hand over money.

“The note said that he had a weapon and would hurt people.

“When the cashier refused, he made the same threats verbally.

“The suspect ran off empty-handed when the quickwitted member of staff refused to hand over any money and told him the police had been notified.

“The suspect is white, 5ft 8in and has a full beard.

“He was wearing a blue baseball cap, dark glasses, dark Nike trainers with a white tick on the side, red jogging bottoms and a white t-shirt with dark stripes.

“He had skin-coloured tape across his nose and multi-coloured tape around the lower parts of each finger between the two knuckles, possibly to cover up tattoos.”

“We would also like to hear from any witnesses who saw this man in the area of WH Smith or Western Road around this time to come forward.