Firefighters have tackled two-high rise fires in Hove within the past 24 hours. 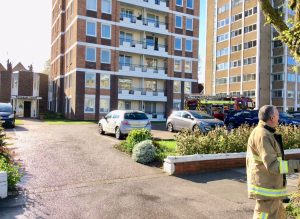 Five engines and the aerial ladder are currently at the scene of a blaze in a sixth-floor flat in Grand Avenue, Hove, which the fire service says has now been extinguished.

And last night, crews from four stations attended another high-rise fire in Goldstone Villas, Hove. That fire was found to be accidental.

A spokeswoman for East Sussex Fire and Rescue said: “We were called today at 4.16pm to a fire on the sixth floor of a high rise.

“There were persons reported in the flat and we committed crew in breathing apparatus to tackle the fire. There were no casualties and the fire is now out.

“At 9.08pm last night, crews from Lewes, Roedean, Hove and Brighton attended a fire in a high-rise building in Goldstone Villas, Hove. The fire emanated from a first-floor flat.

“Crews used four breathing apparatus, one hose reel and one main jet to extinguish the fire. An investigation was carried out and the cause was deemed as accidental.”

Firefighters were also called to two fires in Brighton overnight. The first, at 11.03pm, was an electrical fire at a home in Elm Grove caused by an overheated freezer.

Then at 3.53am this morning, firefighters from Brighton attended a fire in the open in Picton Street, Brighton, which leads to the Patch. Firefighters used one hosereel jet to extinguish the fire.

At the fire in Grand Avenue this afternoon – in Warnham Court almost opposite King’s House – two fire engines and the aerial ladder platform were sent from Preston Circus as well as crews from Hove, Roedean, Shoreham and Lewes. It was caused by a candle in a bedroom.

Station manager Tom Walby said: “If you’re going to use candles, put them in a suitable container or on a suitable surface and make sure they’re fully extinguished before you leave the property.

“The flats’ policies and procedures worked really well. Most people stayed put. Some chose to come out to a point of safety which was fine. 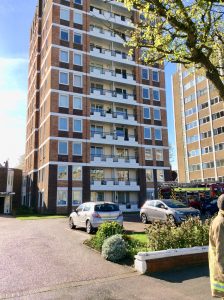 “If any residents are concerned, please contact us for a home safety visit.