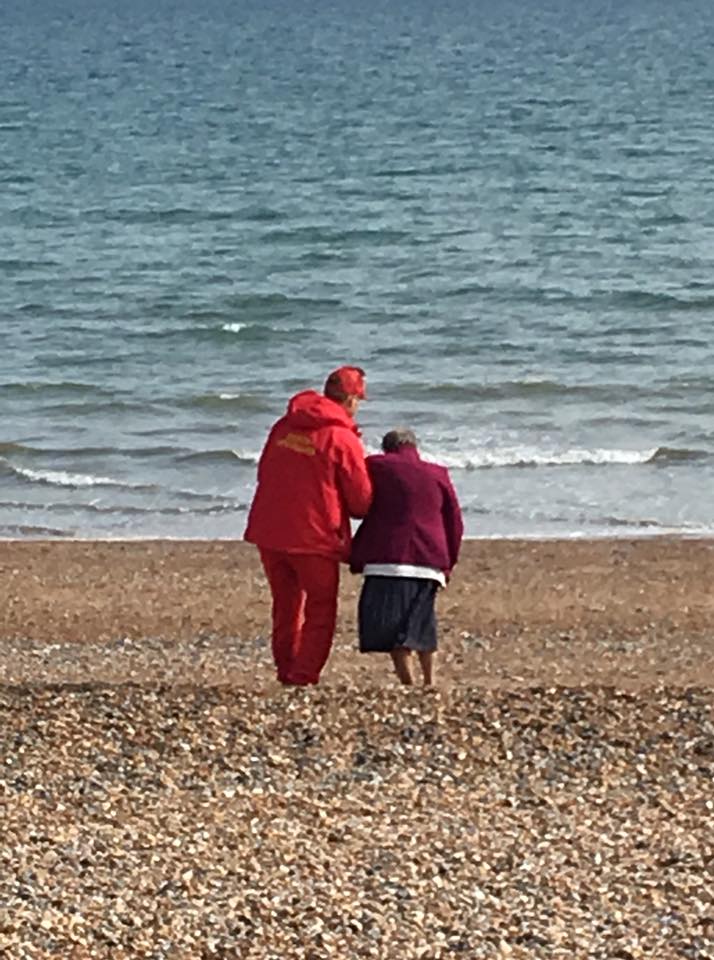 A Brighton lifeguard has become Facebook famous after a snap of him helping an elderly woman down the pebbles to dip her toes in the sea went viral.

Jake Walker was on duty yesterday afternoon when the woman, who was visiting Brighton for the Townswomen’s Guild AGM at the Brighton Dome, asked him to help her negotiate the steep shingle banks so she could have a quick paddle.

Heaven-Leigh Ellison spotted the touching moment, took a picture and posted it on the Brighton People FAcebook page, where more than 2,000 people have liked it and almost 200 have shared it.

Today, Jake seemed a bit bemused by the interest, saying it was the kind of thing lifeguards were asked to do on a regular basis – and they are always happy to be of help.

He said: “It was about 5pm. We were just sitting at our post and it was relatively quiet and this lady just came and asked if someone could help her get to the sea, so I just helped her get down the steep bits and then helped her back up.

“It was low tide so it was sandy which means you have to walk quite a way down the shingle. She paddled for just a couple of minutes and then came back up.

“She was from London for a conference. She said she was Hindu and it was part of her religious custom to visit the sea if you can. I think she also just thought she was in Brighton for the day and should take advantage of being by the sea.

“As a lifeguard, you get a lot of questions and people asking for a bit of help. Sometimes people come in wheelchairs and we have beach wheelchairs they can use and older people or people with disabilities will ask for a hand down and everybody’s happy to help.

“It’s just lucky someone took a photo of it.”

But although yesterday’s fine conditions were ideal for paddling, nobody was asking for help to get close to today’s rough seas as the red warning flags were flying.

Jake said: “Yesterday we got the south westerlies coming in. Today, it’s a real visible change in the conditions, especially at high tide with bigger waves and stronger currents.

“Most people wouldn’t be capable of swimming in these conditions, only really experience sea swimmers who have been in rough conditions would alright.”