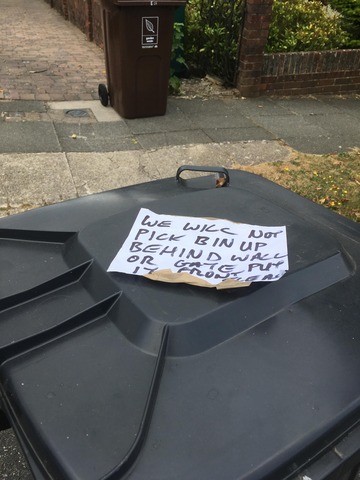 After months of problems with her assisted recycling collection, Brighton resident Louise Turner thought this week everything would be fine.

Mrs Turner is allowed to leave her bins and boxes in her garden because of osteoporosis, which means lifting heavy objects puts her at risk of breaking bones.

After being featured in the local press twice and enlisting the help of councillors after weeks of no collection, she thought her rubbish problems were sorted.

But to her dismay, today a “rude” note was left on her black bin saying her recycling needed to be put out on the road side.

Her black bin was left in the road and six of her recycling boxes were not returned to her garden.

Mrs Turner, of Larkfield Way, had left a note stating “assisted collection” on her bin before today’s recycling collection.

After seeing her bin and missed boxes she said: “I’m feeling quite flabbergasted.

“If I had not been at home to move the bin out of the road, it would have been an obstruction. Nobody else’s bin was left like this.

“I think it was a reaction to my note, which just said ‘Assisted Collection. Thank you’ in a bid to avoid being left again.

“But their response was uncalled for and rude.”

A council spokesperson said: “We would like to apologise to Mrs Turner for the upset and distress she is facing. We are carrying out an investigation into who left this note, why it was left and why her assisted collection is still not taking place properly.”

Her trials began after her recycling collection was missed on Thursday 3 May.

When she contacted the press in early June, a council spokesman promised that the cardboard, bottles and cans would be collected within 24 hours.

Nine days later her recycling was still there, having been ignored once again by refuse and recycling workers.

It was finally collected on Monday 18 June after Patcham ward councillor Lee Wares got involved.

Two weeks ago on Thursday 28 June her boxes were emptied but not the black bin.

Again after calls to the team from Councillor Wares, a refuse and recycling manager came and emptied the bin the same day and took photographs.

Missed recycling collections is a problem area for Brighton and Hove City Council.