Southern Water said that it would cut bills for customers over five years starting from 2020 as it submitted a new business plan to its industry regulator.

The water company pledged to cut bills by more than 3 per cent in real terms from 2020 to 2025 in the plan which it submitted to Ofwat.

It means that the amount on customers’ bills could still rise if inflation is – as usual – above an annual average of 0.6 per cent.

In the past, utility companies have been permitted to put bills up at above the rate of inflation to make up for historic underinvestment during the years when the services were state-owned.

This work is continuing – 30 years after privatisation – with some major works having taken place in Brighton and Hove. Projects include the seafront stormwater storage tunnel and the water treatment works at Peacehaven.

Southern Water’s business plan sets out spending levels as the company continues to replace outdated water and sewage pipes across Brighton and Hove and a wider area stretching from Hampshire to Kent.

With concerns growing about climate change, the company is also investing in better ways to catch and store water.

In Brighton and Hove, the company has about 30 reservoirs, mostly small and underground. It plans to stop using some of these and to create fewer, bigger, more modern reservoirs instead. Eight are planned.

It is possible that the older reservoir sites may become suitable for much-needed housing.

The aim is for utility company bosses and local officials and politicians to work out the best way to upgrade infrastructure such as electricity and water pipes.

But the economic board also looks at how public land could best be used for maximum benefit in the Greater Brighton area.

The little-known and rarely discussed redundant reservoirs could form one strand of the economic board’s wider housing strategy. 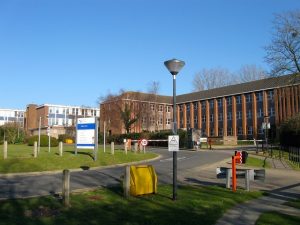 Another of Mr McAulay’s goals fits with the economic board’s ambitions – to train more younger staff to replace the generation approaching retirement. Unsurprisingly, Brexit adds a degree of urgency.

The company does not just create direct employment, he said, with contractors and indirect employment providing a considerable economic boost locally and further afield.

The Southern Water business plan – published in a document called Water for Life – can be found on the company’s website.

“We’ve consulted directly with more than 42,000 customers, stakeholders and experts to co-create an ambitious, deliverable and affordable plan.

“Our vision is to deliver a resilient water future for the south east and we will do this through a combination of becoming brilliant at the basics and delivering five transformational programmes.”

He said that the company was an industry leader in areas such as metering, with 87 per cent of customers now having switched from the “property value” based billing used previously.

Metering had, he said, reduced the amount of water that customers use by 16 per cent to 129 litres per person per day. 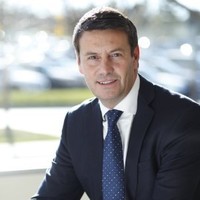 Mr McAulay said: “This plan builds on our success with transformational programmes.

“Target 100 is a great example. We’re aiming to reduce average consumption to 100 litres per person per day by 2040.

“This will mean we can safeguard water for future generations in an area that is already classed as ‘water stressed’.”

The company’s business plan had, he said, taken into account the government’s 25-year plan to improve the environment and the National Infrastructure Commission’s report on preparing for a drier future.

Ofwat is charged with ensuring that the plans are efficient, affordable, deal with customer service and meet companies’ legal obligations.

The regulator then has to set the five-year price, service and incentive package for customers from 2020 to 2025. 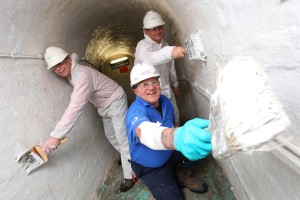 Southern Water said that more dry spells, combined with expected population growth in the south east, were among the challenges that the company was trying to address.

It aimed to cut leaks by 15 per cent by 2025 and encourage customers to use less water which would also reduce bills for the vast majority of people with water meters.

Mr McAulay said that the company would keep improving its dealings with customers – a key issue when he took up his post.

This was part of his ambition for Southern Water to “be brilliant at the basics”. He said: “We have to be better and better at what we do every single day.”

The long, hot and dry summer this year was a good example of how everything was already coming together, he said, including innovating and making better use of new technology.

There was no hosepipe ban – and less water was extracted from sources such as rivers than 42 years ago – despite the population growth since then.

In Brighton and Hove, the “refill” campaign to re-use plastic bottles – supported by a mobile phone app – had taken off. As a local resident, Mr McAulay was delighted with this. 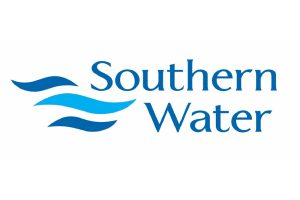 He was keen for bills to be not just more affordable but for Southern Water to demonstrate greater responsibility for its most vulnerable customers.

He said: “We’re learning from the likes of Age Concern and the Citizens Advice Bureau.”

And as an example of the company’s joined up approach, he added: “We’re going to Whitehawk, knocking on doors and asking people if they’d like to learn how to get cheaper water bills.”

Less water use tends to equate to less gas or electricity use too, he said, which meant more savings.

Rather than hit customers in the pocket, Southern Water plans to tap shareholders for much of the extra cash needed to fund the company’s spending plans.

A rights issue – when more shares are issued, with existing shareholders being given first refusal – should raise £700 million. This compares with a budgeted extra £800 million for the coming five years.

Overall, the business plan includes Southern Water’s grand ambitions, its “transformational” goals and the financial underpinning to pay for it all.

“It’s allowing us to make more investment but at the same time as reducing bills.”

And with his enthusiasm for cutting customers complaints – they have already started coming down markedly – and reducing bad debts, the company might also achieve Mr McAulay’s wish to become valued for its contribution not just as a water supplier but as a key player in the community.