Joan Armatrading bathes the Dome in Love and Affection

Joan Armatrading at the Dome, Brighton, on Friday 19 October. 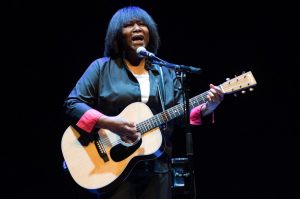 Modest yet confident, Joan Armatrading took to the stage of the Dome just over a month after cancelling a gig here because of a sore throat.

“You’re late,” she said to warm laughter before announcing that she was going to be the support act.

By way of explanation she said that this would mean playing a set of songs that no one would know, adding: “I’m going to play my new album because you won’t have heard it.”

And she did. And the album, Not Too Far Away, fits neatly into the Armatrading canon. It’s her nineteenth album and the songs take in the familiar themes of love and longing.

The stripped back sound was occasionally supplemented by sounds switched on by some kind of pedal, on a relatively bare set with simple lighting.

But whether there was a technical problem or for some other reason, the pedal-initiated effects rarely augmented Armatrading’s best qualities.

The audience, true faithfuls, appeared to overlook these intrusions which were more than made up for by a singer who belies her years. She will be 68 in December.

Her rich voice was in great shape, from the depths to the shrieks, and her self-deprecating humour only added to the joy of what felt like an evening among a big crowd of friends.

The second set indulged those friends, with several favourites including Down to Zero, All the Way from America and Drop the Pilot.

Returning to the stage, she said: “I thought, I’m going to give them an encore whether they want it or not.”

It would be an encore of two songs, she said, and it was little surprise after The Weakness in Me and the timeless Love and Affection that she left to a standing ovation.