Albion completed three straight top flight wins for the first time in 37 years as they overcame a resolute Wolves at the Amex.

Glenn Murray scored his 100th Albion goal and became the club’s top scorer since Tommy Cooke over 90 years ago.

But it was the visitors who dominated a fairly dull and cold first half.

Maty Ryan had to get down sharply to deal with an Adama Traore shot. In fact the winger was giving Albion a fair few problems and Bruno knew he was in a contest.

Another problem for Albion was the huge 6ft 5in Willy Boly. Gaetan Bong who had been assigned to mark the defender at corners was struggling not only to defend against Boly but to keep tracks on the big man’s movement.

Wolves then had a great chance as Raul Jimenez combined well with Matt Doherty, who dragged his shot wide of Ryan’s right-hand post.

Albion’s best chance of the half came from an Ali Jahanbakash corner, missed by Rui Patricio (a goalkeeper wearing 11) but Shane Duffy couldn’t quite direct it goalwards.

Jose Izquierdo was finding plenty of opportunity to get into crossing positions but the final ball just wasn’t there. Albion were out of sorts. This was clear from Chris Hughton’s show of annoyance when Solly March failed to release the ball early enough with several Albion players in clear space. Hughton was spinning around and shaking his fists, in nobody’s general direction.

It was just after half time that history was made as Glenn Murray swept the ball home from a deflected Bruno shot to become the Albion’s second highest ever goal scorer as he notched his 100th goal for the club. 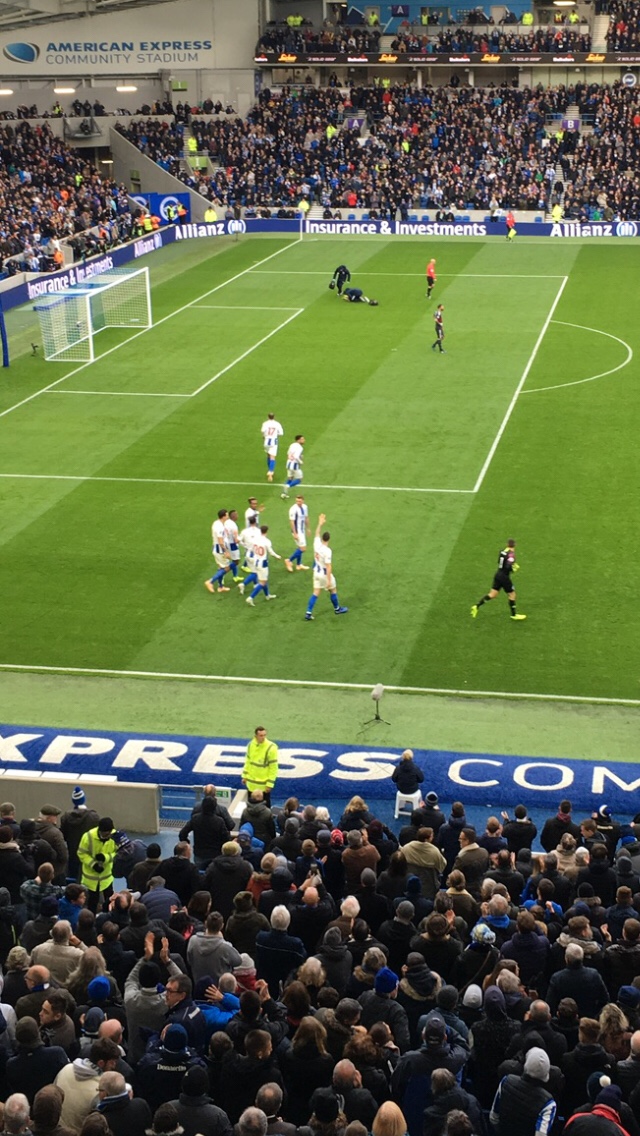 Murray becomes the club’s highest goal scorer for 90 years but is still 23 behind Tommy Cooke.

It was backs to wall for a while for Albion as Wolves pressed for an equaliser. The visitors brought on Diogo Jota and Ivan Cavaleiro.

On 67 minutes the entire stadium stood to applaud the life of Brighton-born sports journalist and broadcaster Peter Brackley , who passed away earlier this month.

Izquierdo ran half the length of the pitch, then found Jahanbakash who missed his kick and Wolves cleared.

The visitors stepped up a gear. Ryan made a great save from Ruben Neves. Then, from a free kick, Lewis Dunk managed to flick a goal-bound effort over the bar with Ryan seemingly beaten.

From a corner only partially cleared, Diogo Jota fired through a crowd from the edge of the area but Ryan got down quickly to smother and save.

Wolves weren’t finished and kept up the pressure. Then Anthony Knockaert, on as a sub for Izquierdo, took the ball from has own half and jinked his way all the way to the Wolves penalty area, but just couldn’t find Jahanbakash, who had sprinted to join him.

With seconds left Ryan somehow managed to get a hand up to divert away Ryan Bennett’s effort and after what seemed an age, referee Taylor finally blew for full time.

Albion move up to 11th in the Premier League, level on points with Manchester United. It is the first time the club have won three top flight matches in a row since 1981 – two years before Glenn Murray was born.

His first was against Crewe in League One in January 2008. His 100th was against Wolverhampton Wanderers in the Premier League in 2018. 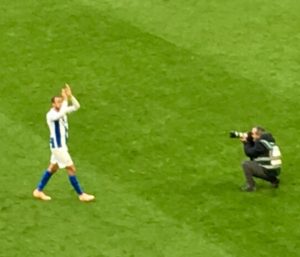 Next for Albion, Everton away on 3 November, four in row? Maybe.