A couple’s plan to demolish their bungalow and replace it with a large house has been turned down by planners. 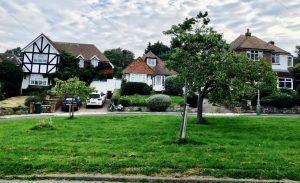 However, members of the council’s Planning Committee voted on Wednesday (7 November) to refuse the scheme, saying that it was “unneighbourly”.

Next-door neighbour Paul Evans told the committee how the rear, two-storey element to the proposed building would overlook and overshadow the conservatory at the back of his home.

He said: “We use the conservatory as part of our living space with the kitchen and living room.

“We would be looking at a brick wall. It would also be dark as sunlight from the early morning to midday would be lost.”

House owner Mrs Peters told the committee that she had taken advice during the pre-application process and consulted with neighbours.

She said a sunlight report showed that there was no harmful overshadowing of the conservatory.

Mrs Peters added: “It fits in the area better than the existing bungalow.”

“It will be a lovely house to live in but not at the expense of the neighbours.”

Green councillor Leo Littman said: “That two-storey extension right next to the conservatory, which is used as a living room, is unneighbourly.”

Labour councillor Julie Cattell, who chairs the Planning Committee, was the only member to vote in favour of the application.

It was refused because the two-storey side element was overbearing and unneighbourly.