The jury in the Babes in the Wood double murder trial has been sent out to consider its verdict.

The six men and six women are being asked to consider whether former roofer Russell Bishop, 52, is guilty of murdering two nine-year-old girls – Nicola Fellows and Karen Hadaway – in October 1986.

Bishop, formerly of Stephens Road, Hollingdean, is accused of strangling the girls in Wild Park, in Moulsecoomb, on the edge of Brighton.

The judge, Sir Nigel Sweeney, also known as Mr Justice Sweeney, is presiding over the trial, which is now in its ninth week at the Central Criminal Court – better known as the Old Bailey – in London.

He started summing up the case on Thursday (6 December), continuing throughout the day on Friday and for a further two hours today (Monday 10 December).

Bishop was originally tried for the murders at Lewes Crown Court in 1987 when he was acquitted.

Unusually he is facing a second trial because the law on double jeopardy has since changed and advances in DNA science have brought fresh forensic evidence to light.

In 1990 Bishop was convicted of kidnapping a seven-year-old girl in Whitehawk and sexually assaulting her and leaving her for dead at the Devil’s Dyke, just north of Brighton.

The prosecution has been permitted to tell the jury about Bishop’s convictions as evidence of his bad character, in part because of the similarities between the 1986 murders and the 1990 case. The defence highlighted differences between the two sets of offences.

The judge referred to several agreed facts – accepted by both the prosecution and defence – as well as a number of admissions by Bishop.

Previously, in the witness box, Bishop told the court that he had lied on oath during his 1990 trial. The jury was told that this could be taken only as evidence of his credibility as a witness.

But after about 90 minutes of cross-examination by prosecutor Brian Altman he refused to answer any further questions.

The jury was entitled to take this into account when weighing the evidence, the judge had said.

For the past week Bishop has refused to come from his prison cell to court although the judge said that the jury should not read anything into regarding his innocence or guilt. He was absent again today.

The judge also reminded the jury that there were prosecution witnesses that defence barrister Joel Bennathan would have liked to have cross-examined.

Some had died in the 32 years since the original investigation by Sussex Police while at least one witness was seriously ill and unable to attend court.

The case is built largely on circumstantial evidence, the judge said, including the sighting of Bishop close to where witnesses last saw the two girls, who lived a few doors apart in Newick Road, Mouslecoomb.

But there is a great deal of scientific evidence, some of it “extremely strong”, the judge said, although the defence had raised concerns about contamination which the jury would have to decide.

The case against Bishop is supported by the advances in DNA technology since 1986 when the science was in its infancy and still relatively little known. 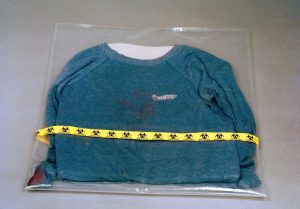 Both the prosecution and defence have focused on a Pinto sweatshirt, alleged to have been worn by Bishop when he killed the girls.

Paint, hair, blood and other fibres on the sweatshirt may provide crucial links in deciding whether Bishop was innocent or guilty.

The sweatshirt was first found while a search was under way for the two missing girls before their bodies were found on Friday 10 October 1986 and the case became a murder inquiry.

The defence said that not only was Bishop innocent, but that a reasonable case could be made that Barrie Fellows, the father of one of the victims, Nicky Fellows, had killed the girls.

Mr Fellows was arrested in 2009 after claims were made that he had been seen watching a video of Nicky being sexually abused by his friend, Dougie Judd.

Only Russell Bishop was on trial, the jury were told. He denies two counts of murder.