Brighton teenager jailed for 20 years for stabbing a stranger

A Brighton teenager has been jailed for 20 years after he stabbed a stranger three times in the chest in an unprovoked attack.

Ash, formerly of Queen’s Park Road, Brighton, and Windlesham Road, at the Seven Dials, smashed a window at Mr Edwards’s home in Strood, Kent, with a plank of wood that he found in the street.

When Mr Edwards came out of his house to find out what was going on, Ash stabbed him with a knife.

The teenager, who has no fixed address, was with two other thugs. He denied attempted murder, unlawful wounding and having a knife. But he was found guilty by a jury at Maidstone Crown Court.

Ash was jailed at the same court yesterday (Tuesday 11 December) and will have to serve at least two thirds of his 20-year sentence before he can be freed on parole.

He will also have to spend three years on licence once he has been released, subject to being recalled to prison if he reoffends.

He was already in prison anyway, serving 27 months for affray, after a stabbing at the KFC, in London, Road, Brighton, in July last year.

The court heard that the troubled 19-year-old already has 15 previous convictions for 35 offences involving drugs, dishonesty and violence.

Judge Charles Macdonald said that the attack in the Kent town was savage and that there was overwhelming evidence that Ash was dangerous.

The court was told that at about 8.45pm on Friday 29 September last year Ash was seen picking up a piece of wood that had been left in Vicarage Road, Strood.

Kent Police said: “He then used the wood to smash the window of a nearby property, despite not knowing the occupants or having any reason to cause the damage.

“The occupant, a man in his fifties, went outside with his teenage son to challenge Ash who launched himself at the father and stabbed him three times in the chest.

“The victims managed to get back inside their home and Ash stabbed through a window in the front door, catching the younger victim’s hand, before fleeing the scene.

“The older of the two victims suffered numerous, life-threatening injuries to his chest and abdomen. 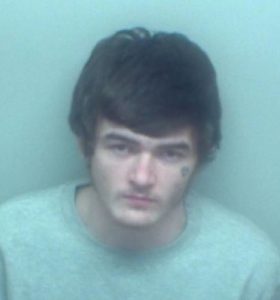 “Crime scene investigators gathered a wealth of evidence from the area, including three wooden planks and swabs of blood found at the scene.

“Forensic analysis of the blood provided a clear match for Ash.”

The Brighton teenager is believed to have been looking for a rival drug dealer, with a view to stabbing him.

But while drunk or high on drugs – or both – he appears to have called at the wrong house and stabbed the wrong man.

Detective Constable Oliver Tween, the investigating officer, said: “This was a savage and completely unnecessary attack against two people who were picked completely at random.

“The older of the two victims came incredibly close to losing his life and, even though he has survived a horrific ordeal, he will spend the rest of his life affected by this incident.

“Ash has proven he is completely incapable of living in society and if he were to remain on the streets, he would present a very real danger to innocent members of the public.

“I welcome the sentence he has received and, while it can’t undo the damage Ash has caused, I hope it can provide some closure to the victims.”