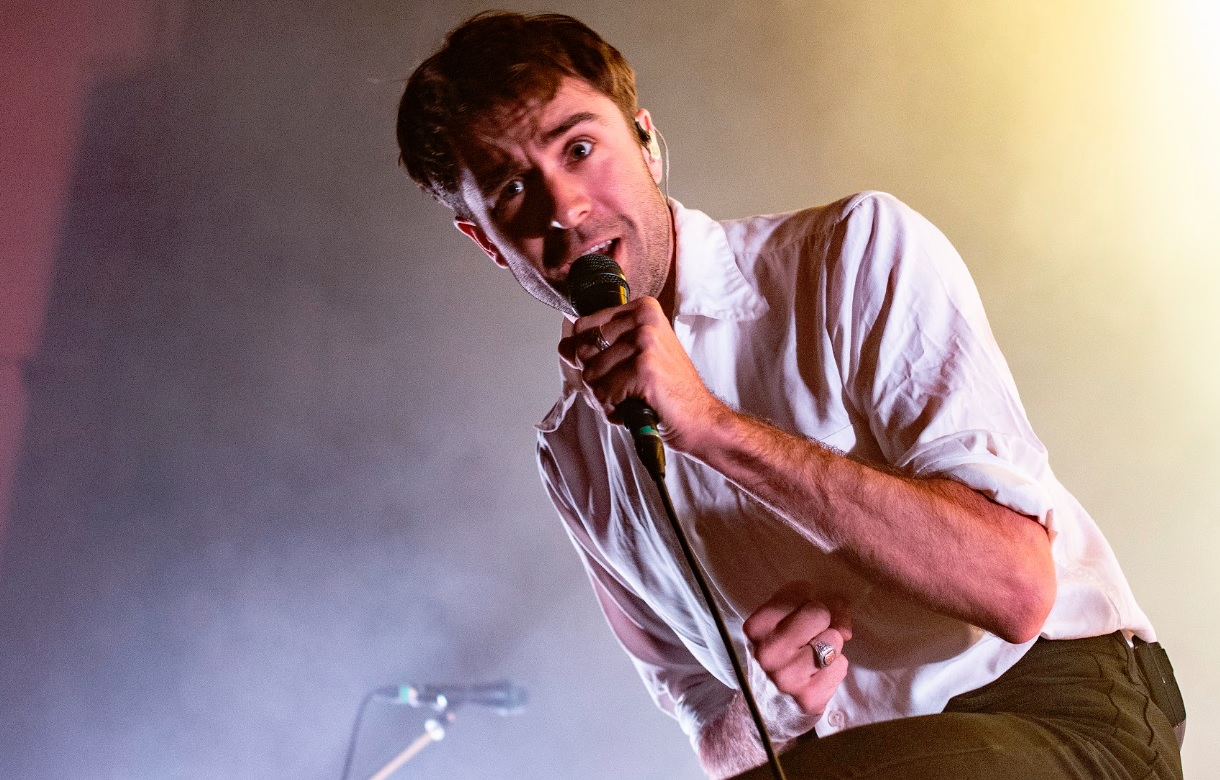 Indie pop-rockers The Vaccines were back in town and they really love playing in Brighton. During their ten year career they have released around nineteen live tracks across various releases that have been recorded in our wonderful city.

Tonight at the Brighton Dome Concert Hall, lead singer and guitarist Justin Hayward-Young confessed that he has in fact had a DNA test and that the results came back indicating that 78% hails from south-east England – cue big cheer from the packed mainly late teens early twenties crowd. Well, the 31-year old was born along the coast in Southampton, so I guess that it was no great surprise really. 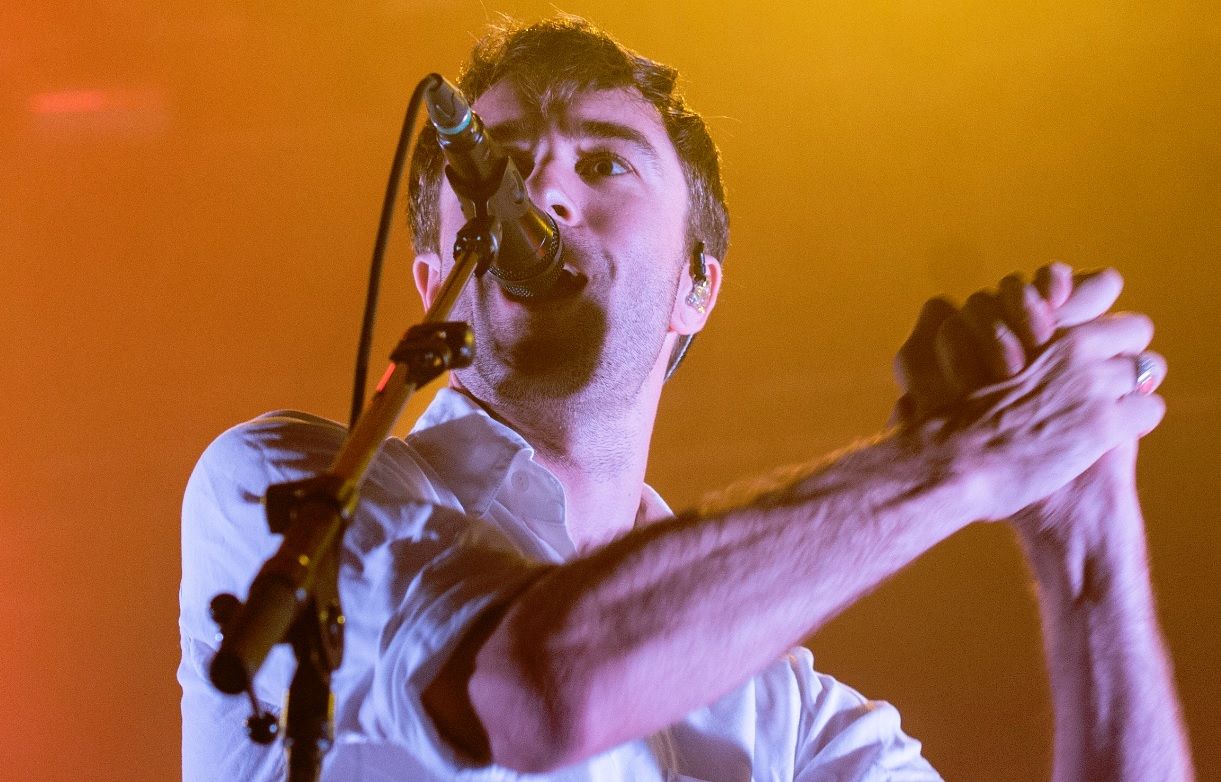 Justin was joined on stage by his cohorts, Freddie Cowan (lead guitar/vocals – who incidentally is the younger brother of Tom Cowan from The Horrors), Árni Árnason (bass/vocals), Timothy Lanham (keyboards) and Yoann Intonti (drums) as well as several plastic palm trees in order to get the sunny holiday vibe going. The lads are all of slender build and were reasonably smartly dressed for the occasion as they ploughed through their twenty-one song set.

Sadly for me, they didn’t perform their cover version of ‘That Summer Feeling’ by the wonderful Jonathan Richman as found on their covers EP ‘Please, Please Do Not Disturb’. For those of you who are unaware of the genius of Jonathan Richman, he was the frontman for The Modern Lovers and yet many of you will know him from the beginning of the hit movie ‘There’s Something About Mary’, where he is singing and playing his guitar up a tree. The bloke’s a legend and I have been fortunate to have seen him live on three separate occasions down the years. 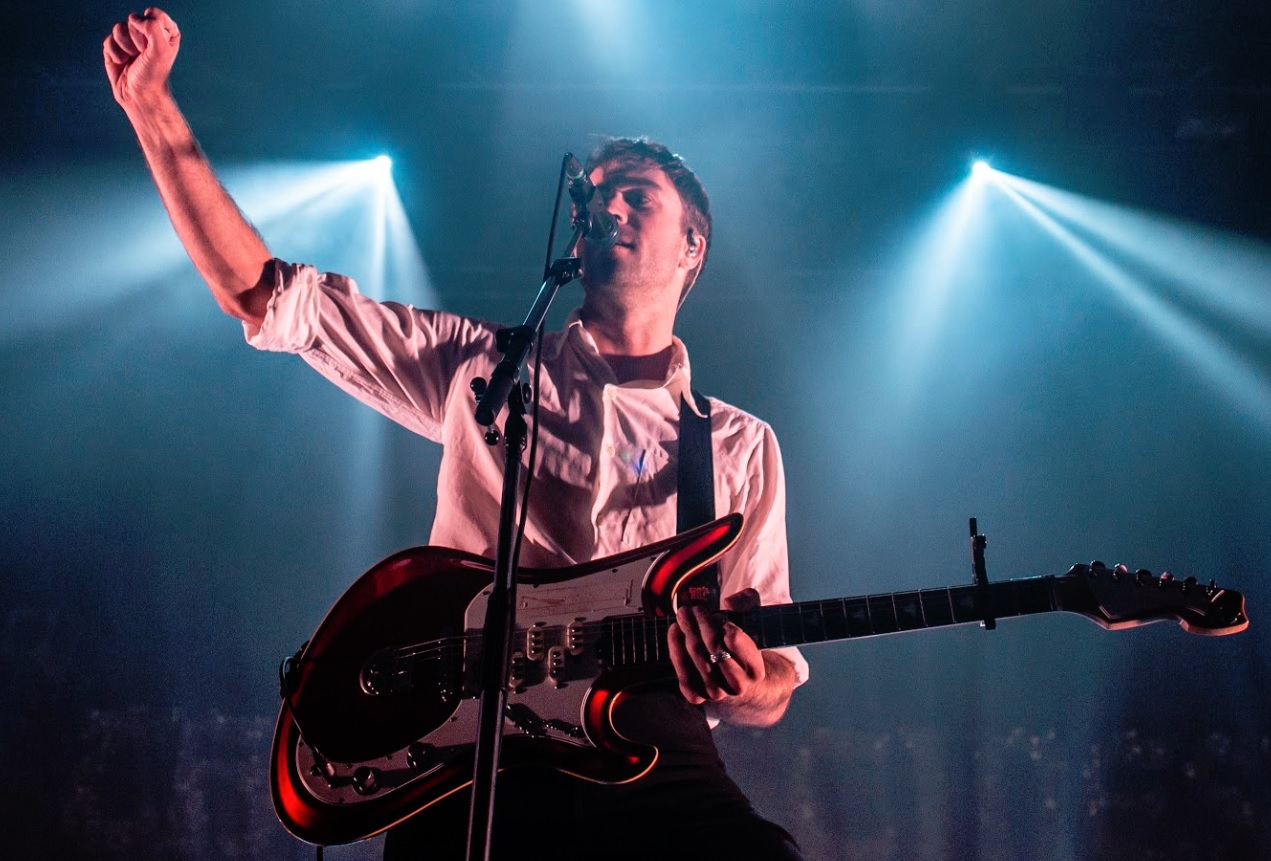 Meanwhile back at the Brighton Dome and The Vaccines in the main just get on with their set with reasonably little banter in between tunes. It did seem to me that it was a case of business as usual with the lads but the sold out crowd were lapping it up as they joined in with The Vaccines easy-to-sing-along-to-set.

I hadn’t previously noted this, but I felt as though there was some musical similarity with ‘Let’s Jump Off The Top’ to Dire Straits ‘Twisting By The Pool’. I felt that ‘Handsome’ had a pleasant uplifting beat and there was a tune that as far as I can recall said “Thinking About You” (Vaccines fans I need help here, anyone know the track?) which was good. I thought ‘If You Wanna’ was sounding mighty fine too. 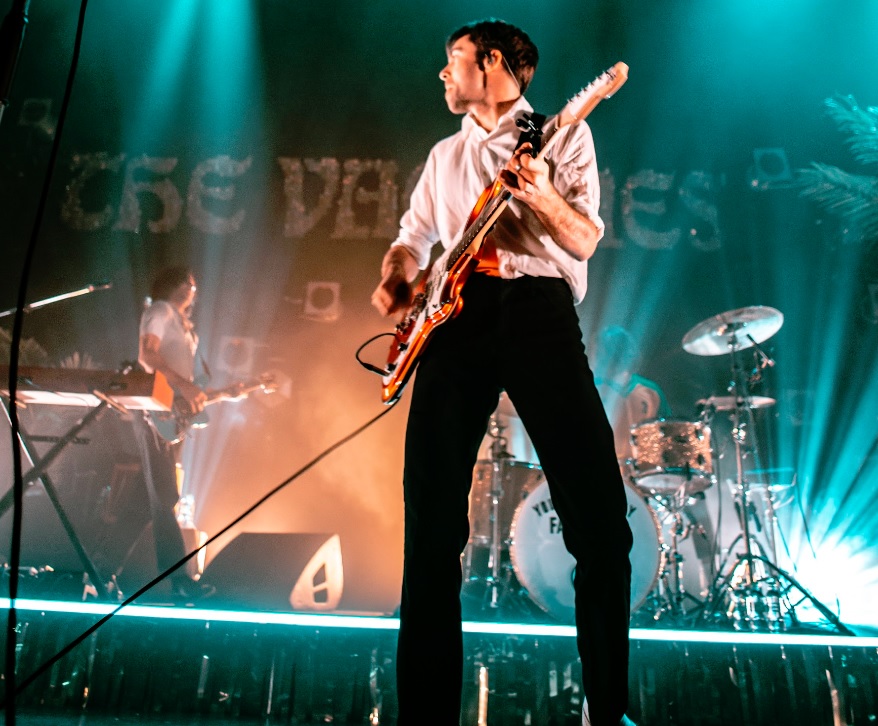 The song on the night that got the crowd bouncing up and down the most was the first single of last year, namely ‘I Can’t Quit’ and the singalong-a-crowd award winner on the night was the final song of their three track encore, ‘All In White’.

I was making notes during each song in order to supply you guys with a setlist, but if anyone disagrees with the list below, then please post a comment after the review – thanks guys. 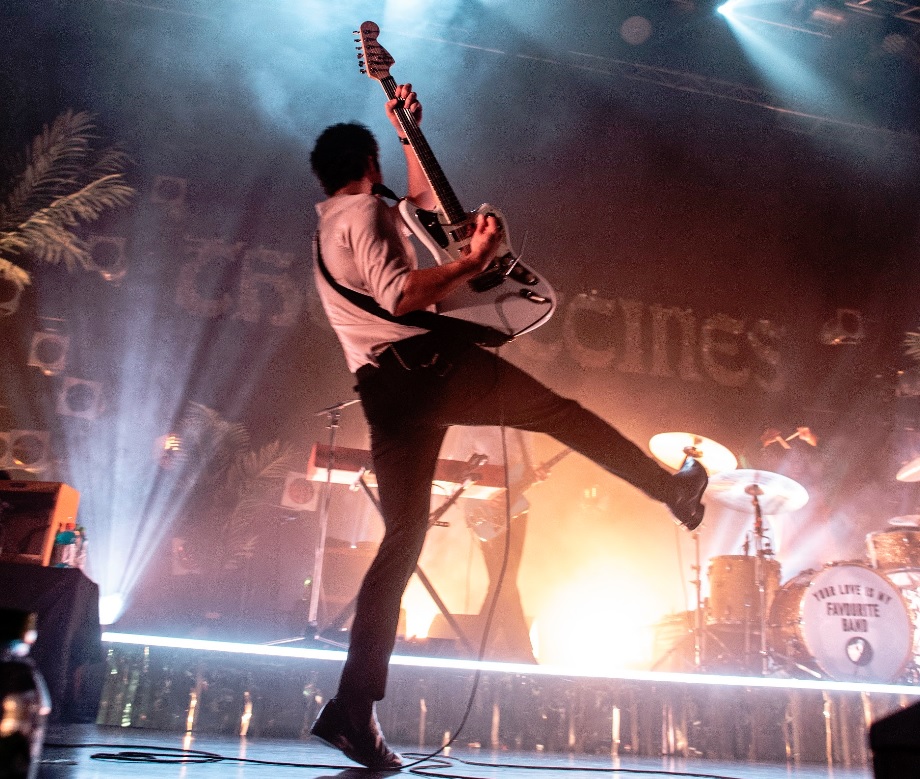 More information on The Vaccines can be found HERE.

Support on the night came from Hatchie and Jesse Jo Stark. 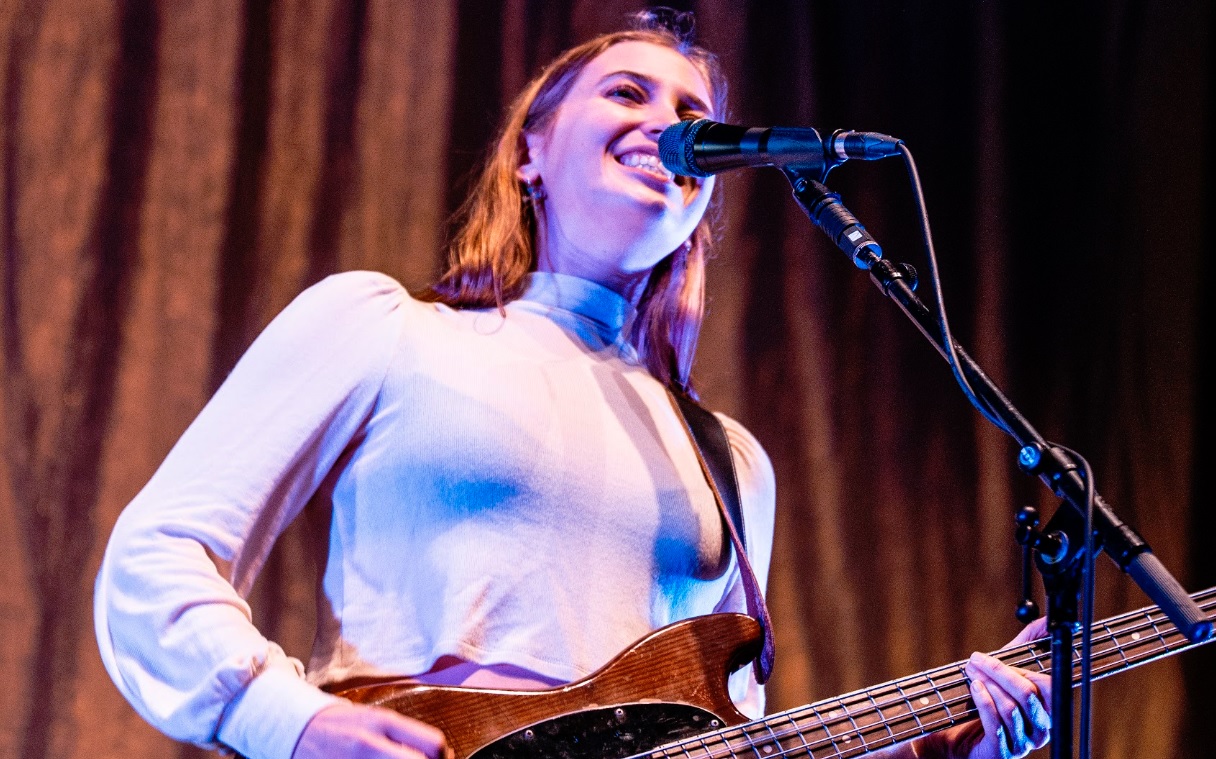 I had particularly been looking forward to catching Hatchie playing live as we were going to see her perform at The Arch on Friday 18th May 2018 as part of The Great Escape in Brighton, however things didn’t exactly go to plan. It happens quite often at The Great Escape, when you intend to see one act and end up watching another at a different venue in town.

Hatchie is one of several exciting artists signed to the Heavenly Recordings label. Others to look out for being Amber Arcades, audiobooks, Confidence Man, Halo Maud, and The Orielles. 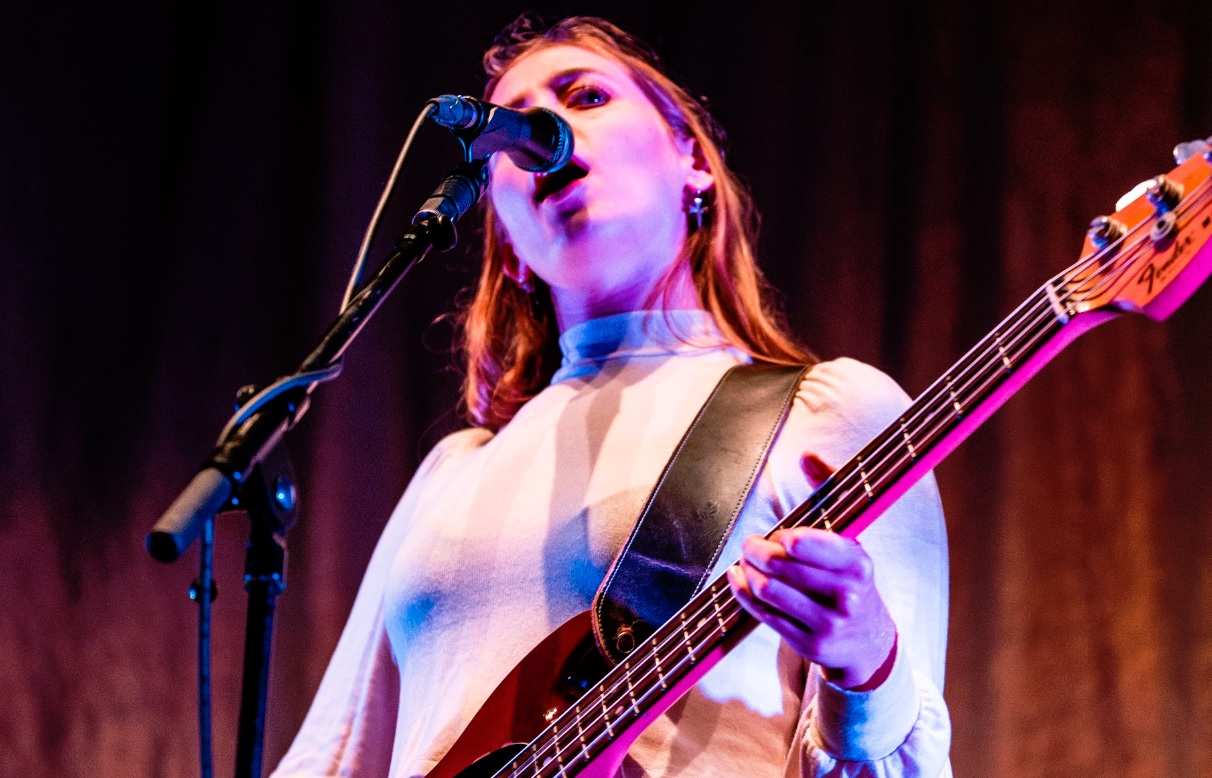 Hatchie is the world of singer/guitarist Harriette Pilbeam. To hear her music is to step inside her mind; a dreamy landscape where cascading synths, jangling guitars, propulsive rhythms and white noise undulate beneath undeniable and irresistible pop melodies. Rather than focusing on the external world of her daily life in Brisbane, Pilbeam instead turns her gaze inwards, making a soundtrack out of her daydreams, setting her emotional life to song.

It seems as though life is treating Harriette mighty fine at present as not only has she released her debut EP entitled ‘Sugar & Spice’ and been chosen by the NME as one of their ‘Essential New Artists for 2019’, but after her Vaccines tour dates, she’s off back home to Oz to play four gigs with Kylie Minogue in March and then off on a 30 date tour of the USA with Girlpool. 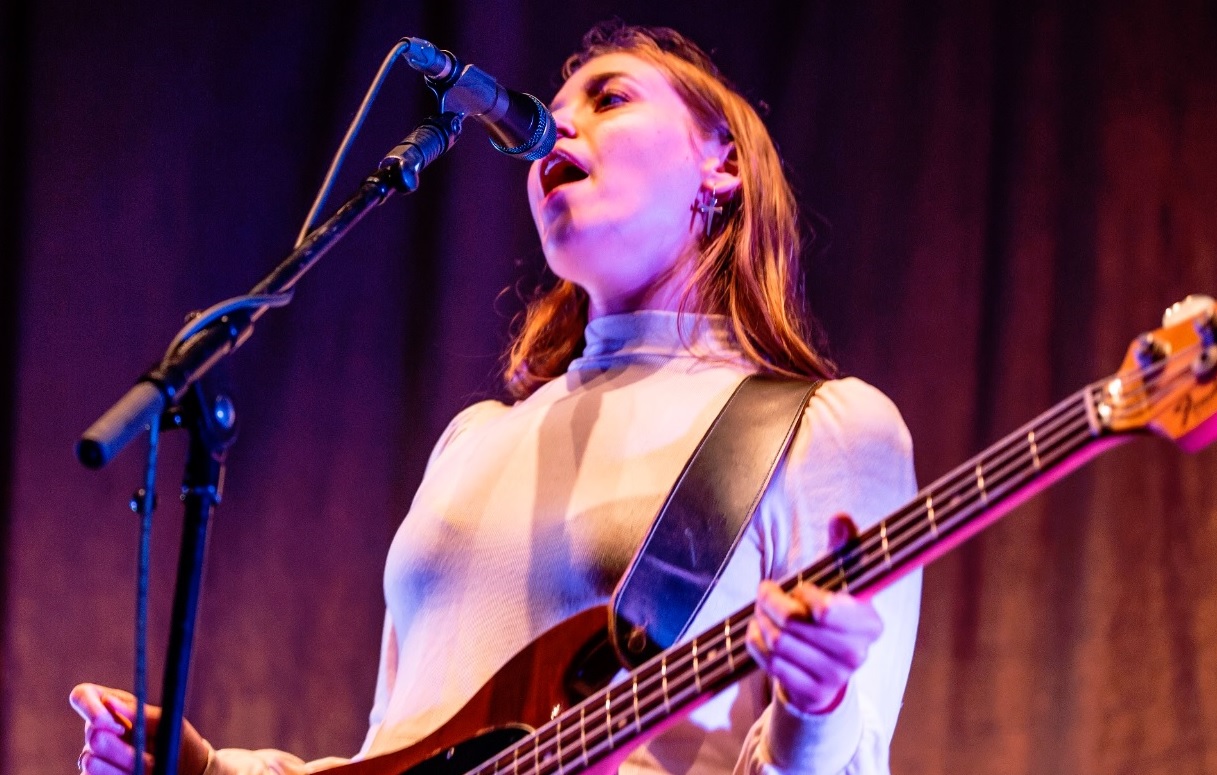 I have to say that I already regret not purchasing the candy blue coloured 12” vinyl of the five tune ‘Sugar & Spice’ EP that was on sale at the merch stand at the Dome. I understand it is also available in baby pink vinyl too. Suffice to say that the order of the day was for Harriette and her three pals to plug the new EP and inform the responsive crowd that there is an album on the way. 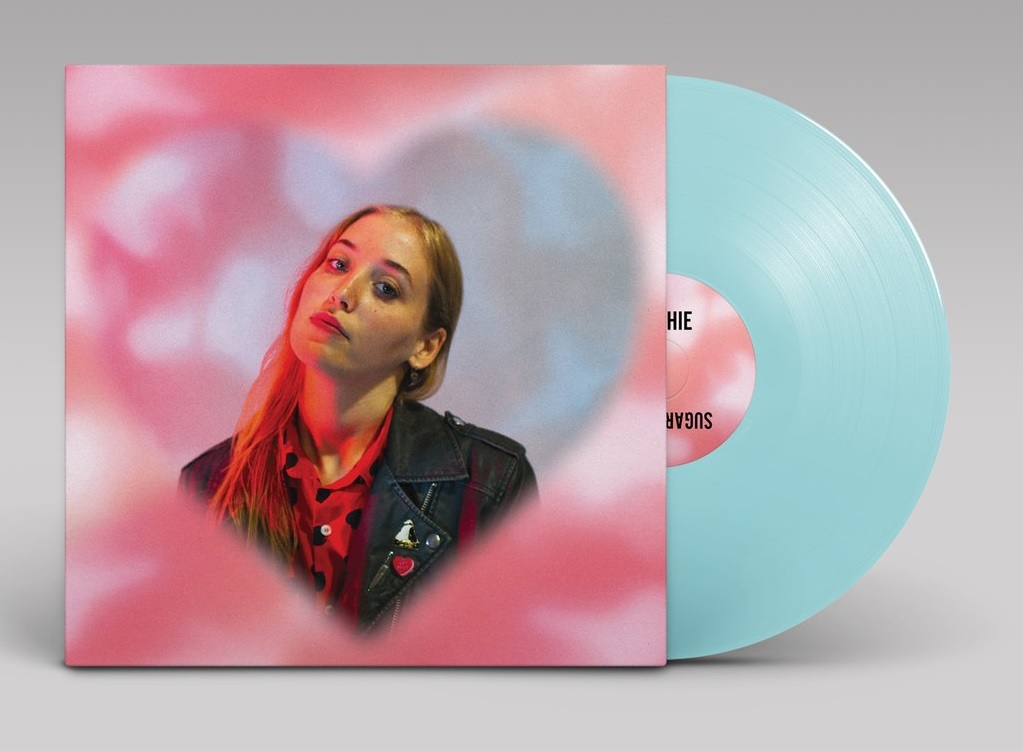 The songs on the every-tracks-a-killer-and-not-a-filler ‘Sugar & Spice’ EP are ‘Sure’, ‘Sleep’, ‘Sugar & Spice’, ‘Try’ and ‘Bad Guy’, which made the backbone of her fantastic live set tonight.

I had made some notes during the set and had written “The Sundays ‘Here’s Where The Story Ends’ meets the Cocteau Twins and The Bangles ‘Manic Monday’” and blow me down I have just read the editors notes regarding this release on Apple Music is virtually the same! Great minds think alike. Not only that but the Cocteau Twins Robin Guthrie is a Hatchie fan and has remixed the ‘Sure’ single too. 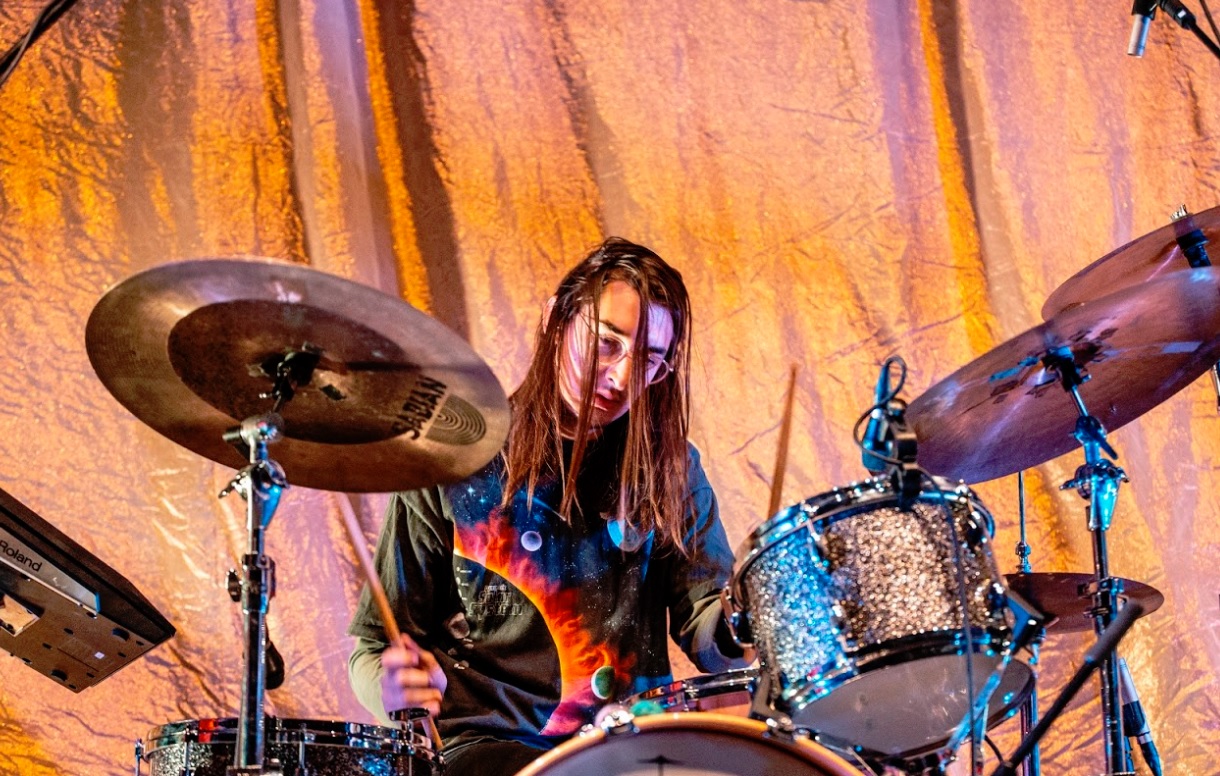 I hope to see her perform live again and can’t wait for her debut album! 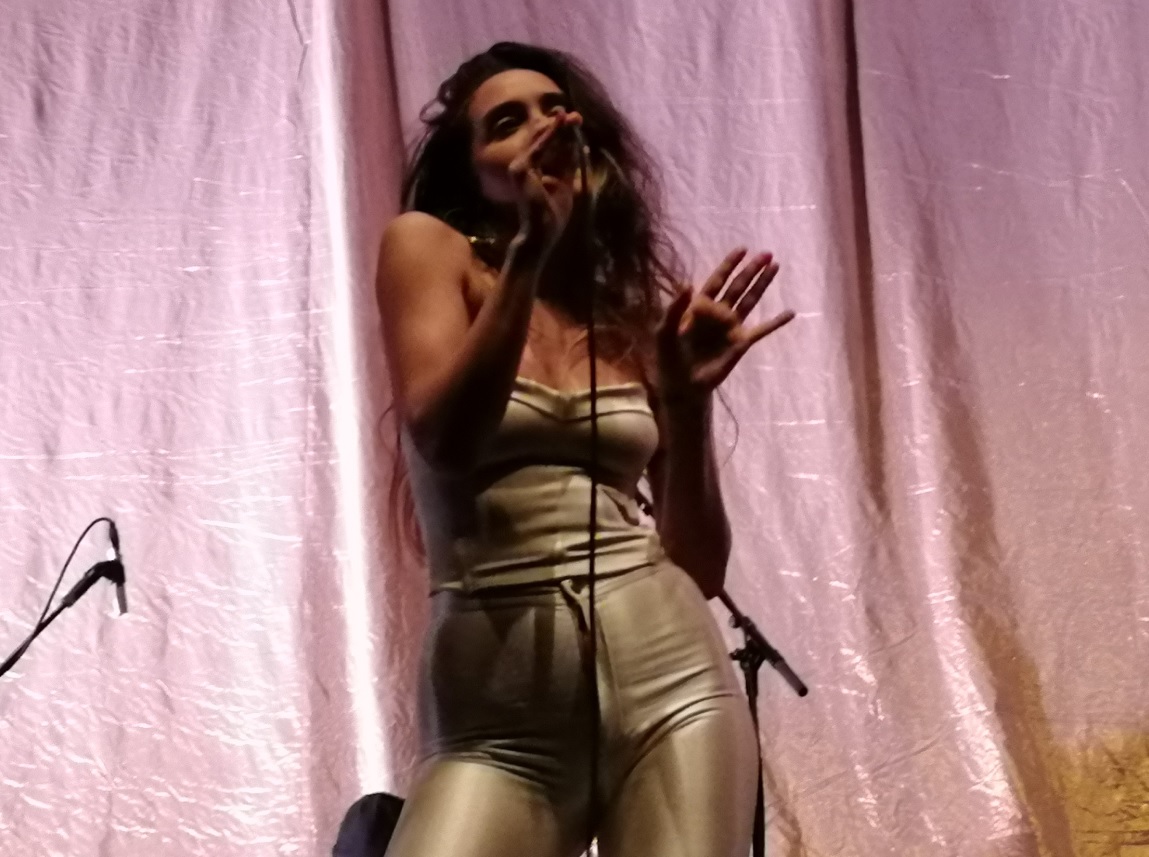 The night was kicked off by Jesse Jo Stark with her four piece band. Jesse looked absolutely stunning in her silver outfit and immediately got my musical attention when she started by singing the first few lines from Cher’s 1966 hit ‘Bang Bang (My Baby Shot Me Down)’, which I have to be honest in stating that I find Nancy Sinatra’s version far superior. 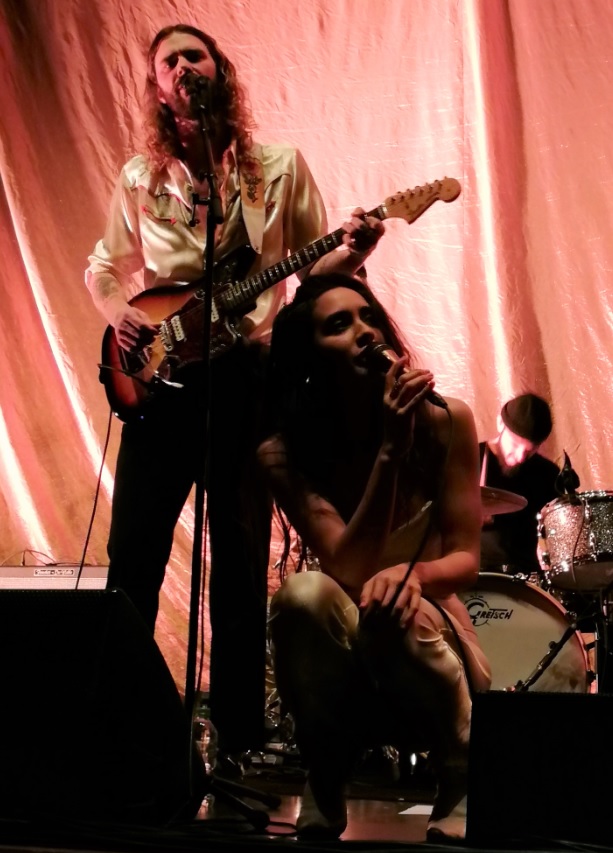 As Jesse was on stage a mere half an hour after the doors opened, the crowds were continually pilling in during her set. So when she started her performance the Dome was virtually empty, but at the end it was nearly full. It was a shame that many people missed several songs from Jesse’s seductive set.

Jesse hails from Los Angeles and has taken on board that early 1960’s horror/sci-fi comic/movie image of an enchantress as it’s a recurring theme for the covers for her singles, especially with her latest offering ‘Mystery’. This tune is seriously embedded in Lana Del Rey territory with a nod to Richard Hawley me thinks, as is ‘Deadly Doll’, whereas ‘Breakfast With Lou’ will certainly get your shoulders shaking in a 1960’s vibe! 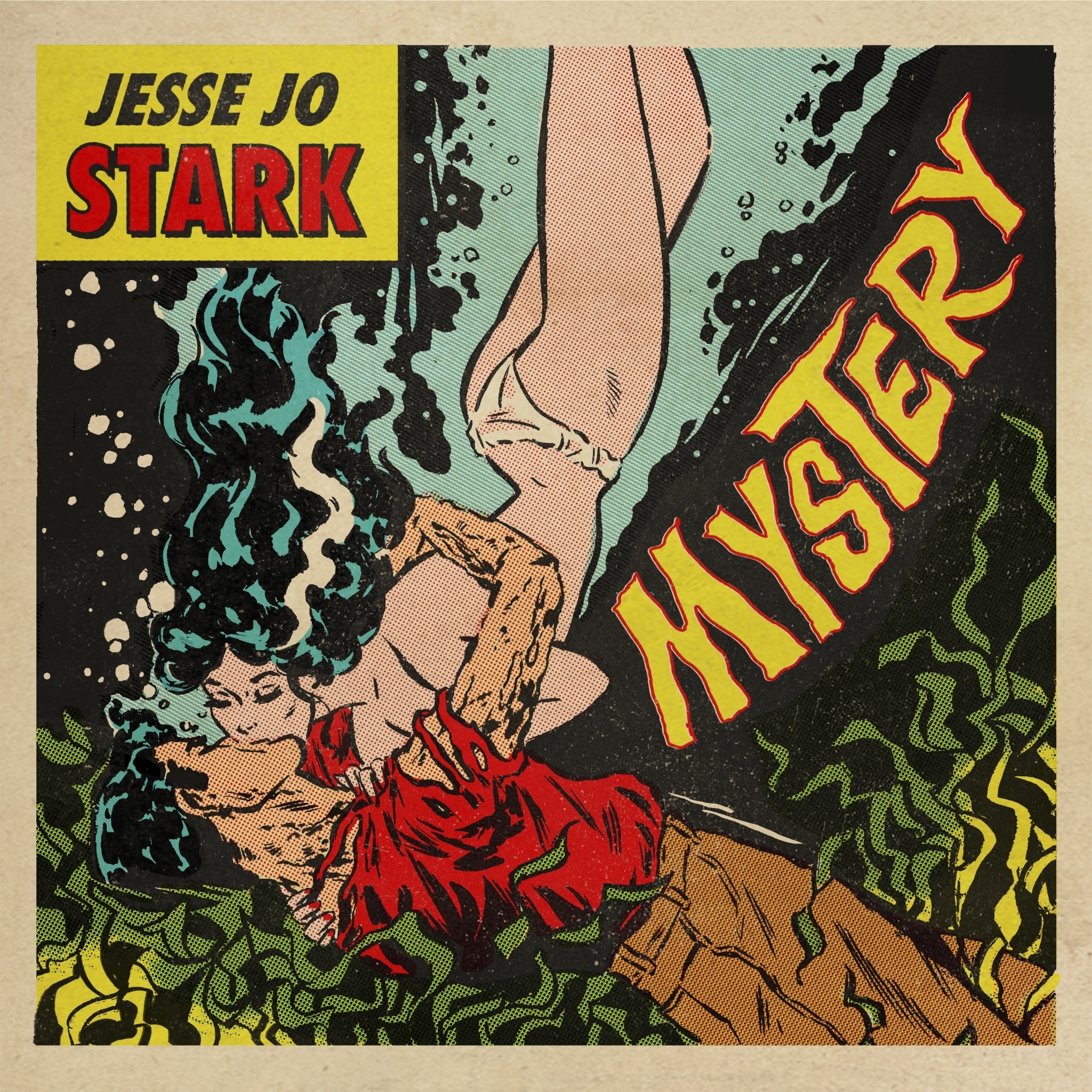 Her ‘Wish I Was Dead’ tune reminds me of a mix of The Estrons meets Lenny Kravitz, whereas the video goes for that 1960’s cave girl look. Her tune ‘Driftwood’ is to me 100% country. 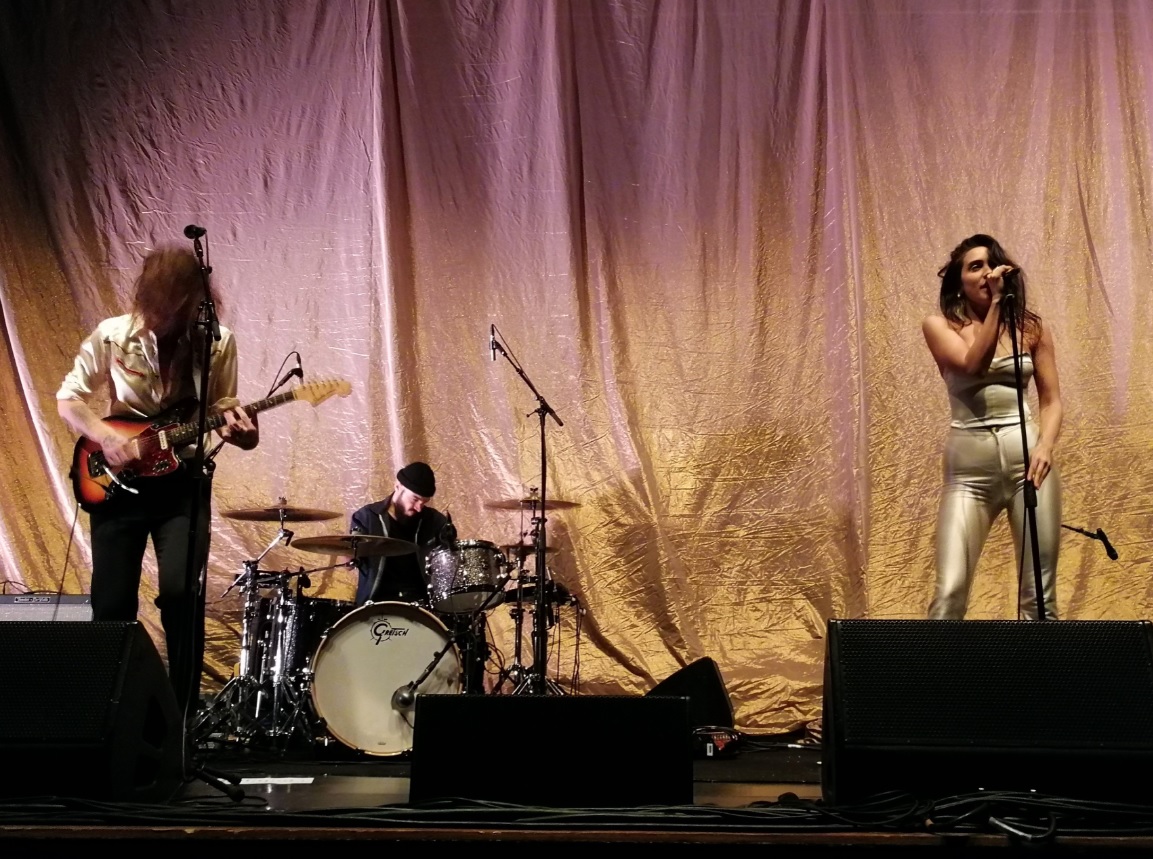 Her penultimate live track tonight was her rendition of Kim Carnes ‘Bette Davis Eyes’. I wouldn’t mind betting that Jesse will be heading towards a certain success of stardom over the next few years!

The Vaccines and Hatchie photographs were kindly supplied by www.cczhphotography.com 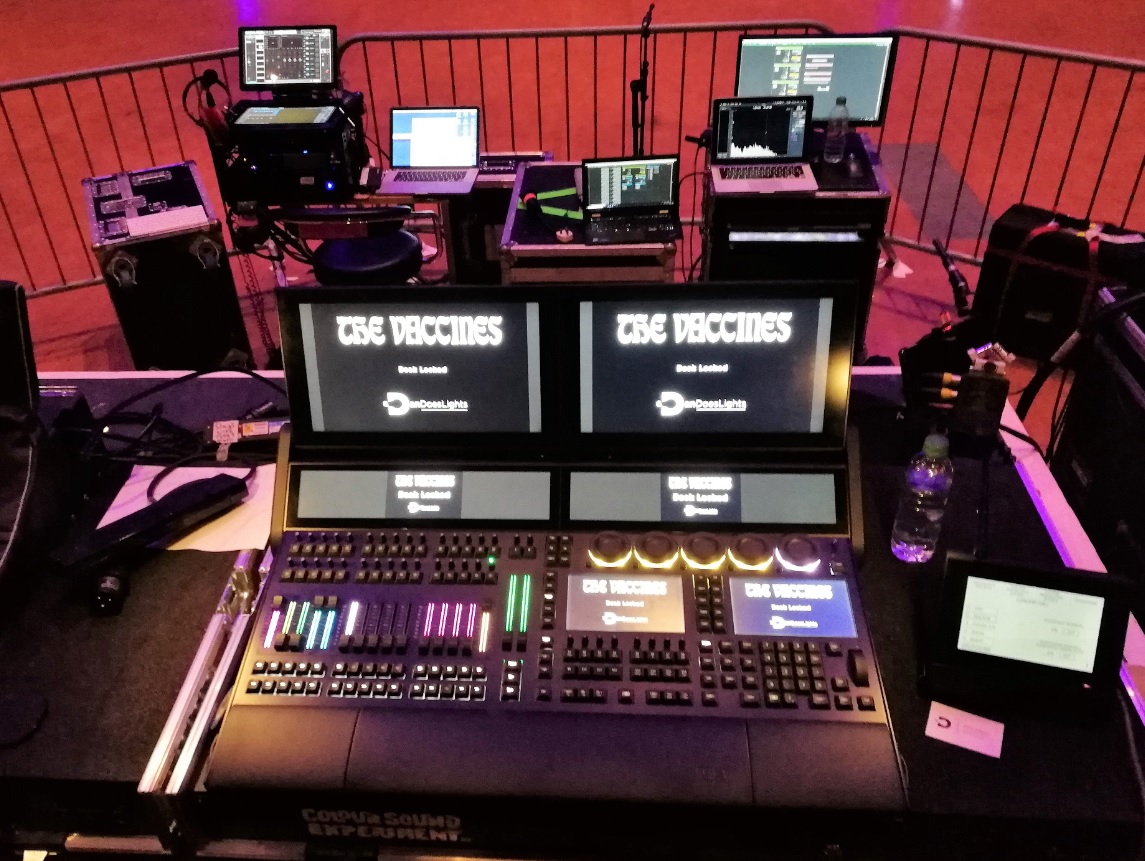 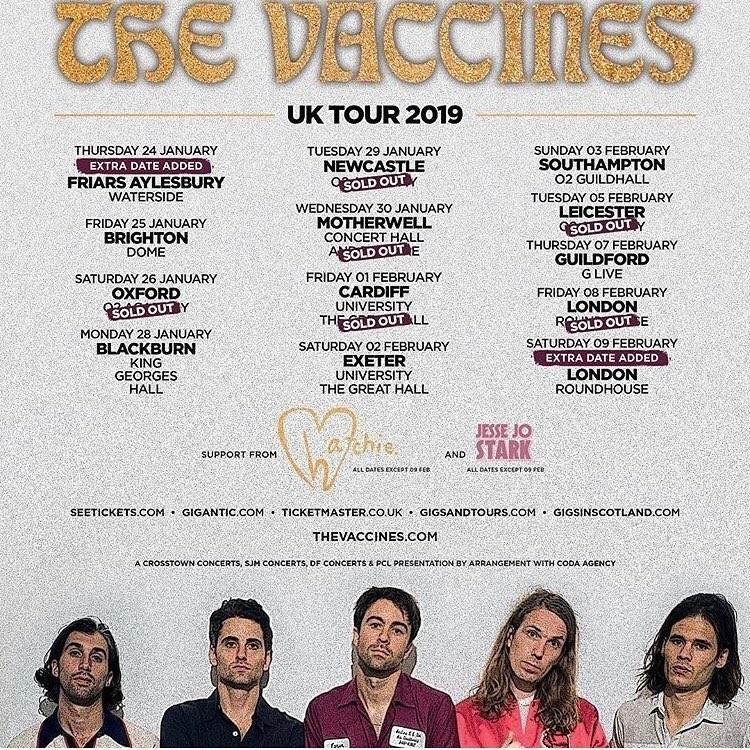 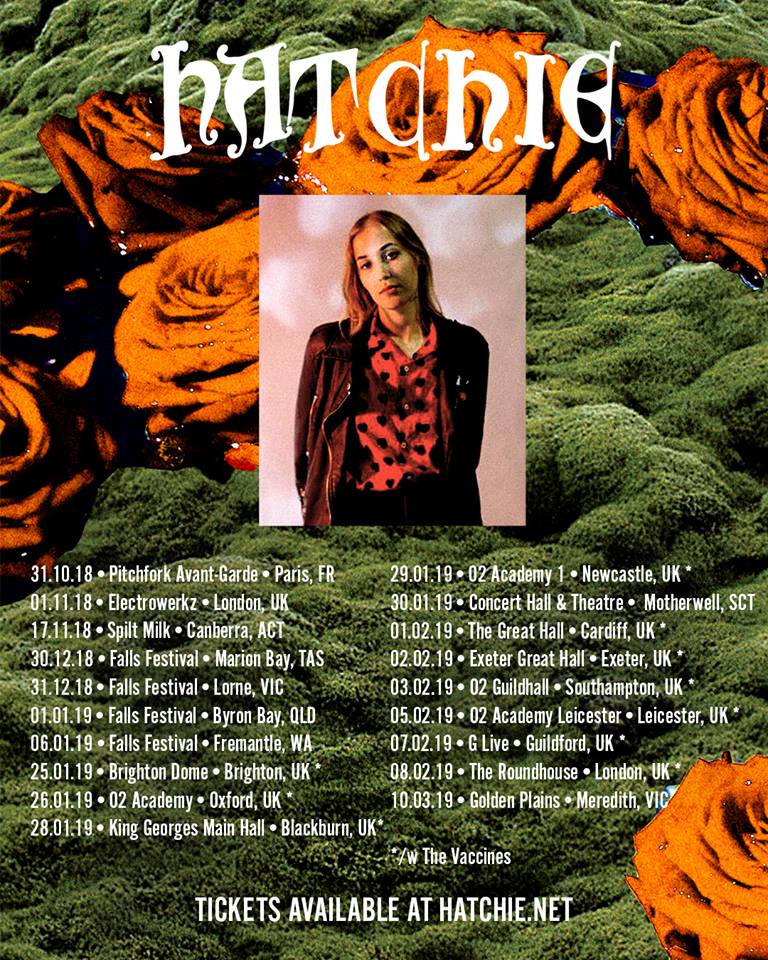 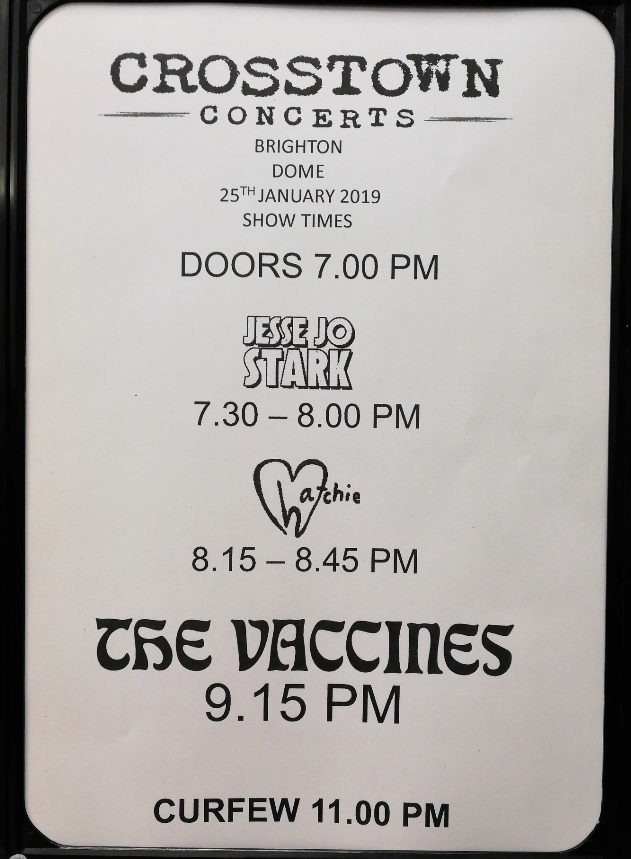 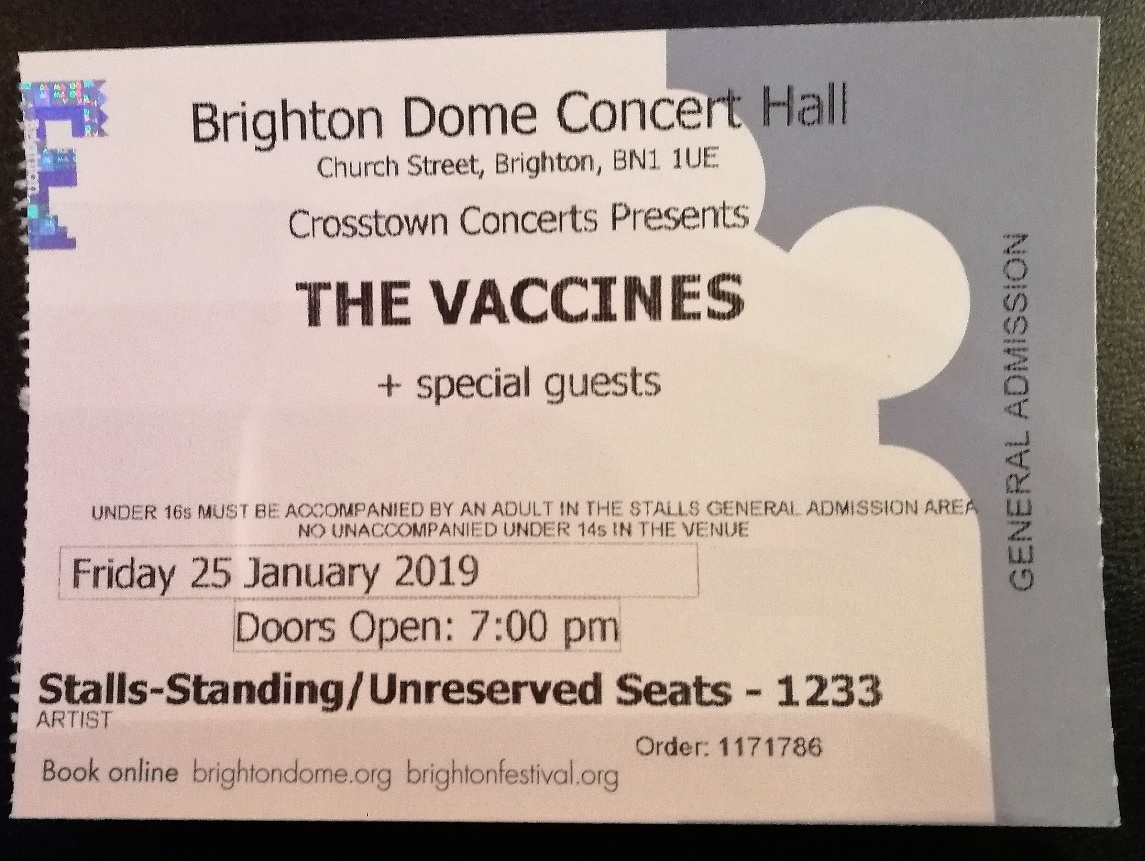