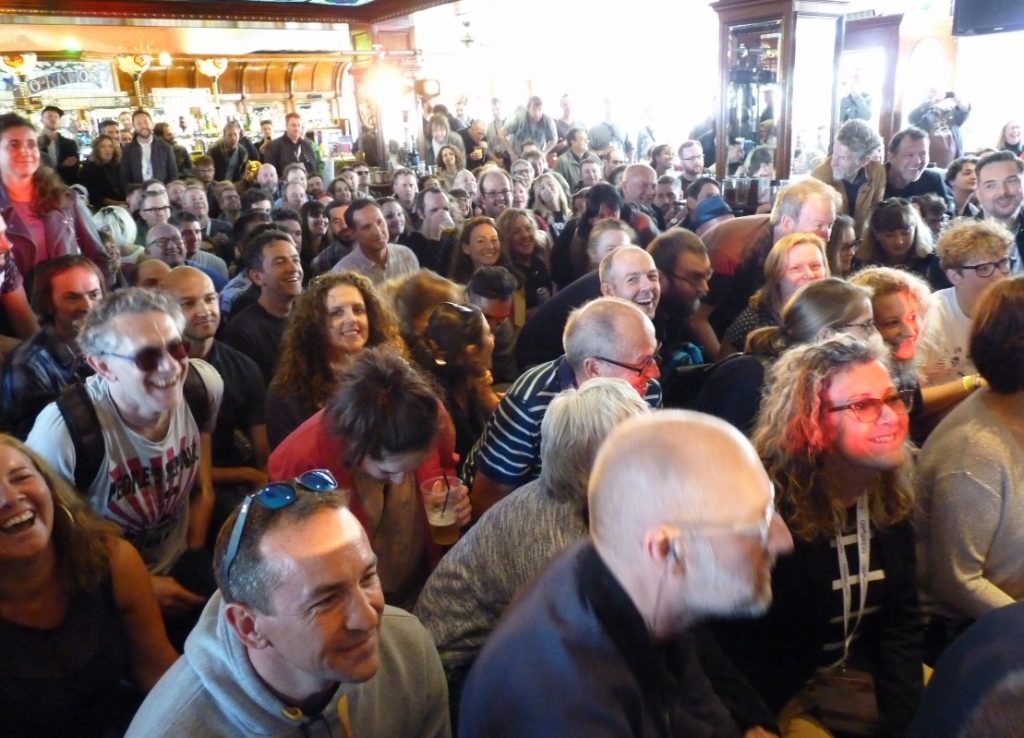 The crowd is brought to their knees during The Great Escape 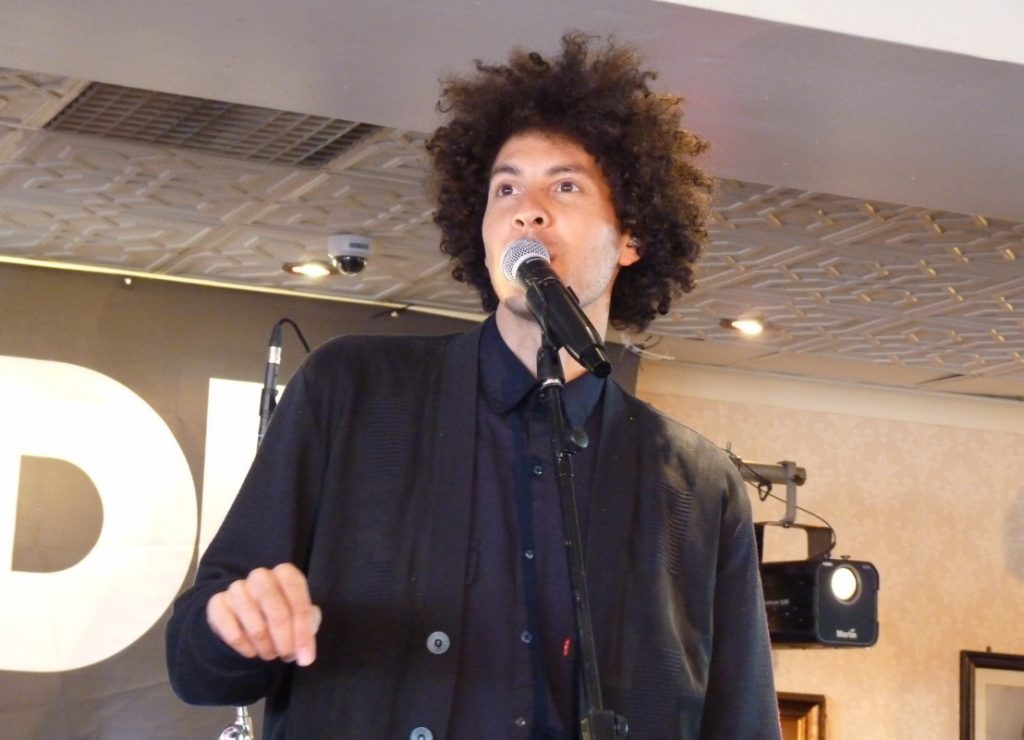 TÉMÉ TAN (12:30-13:00 Horatio’s) .This is the work of a Belgian guy with Congolese roots by the name of Tanguy Haesevoets. His music tells intimate stories mainly about his Kinshasa roots with a über-modern pop vibe, mixing soul, hip hop and afro elements. Interestingly he played Korg looper upside-down, so we could see what he was up to. His debut self titled album is coming out this September. This was an uplifting start to the day. https://www.facebook.com/temetan.page/ 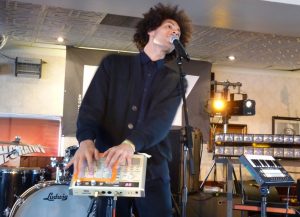 Tanguy Haesevoets at The Great Escape 2017 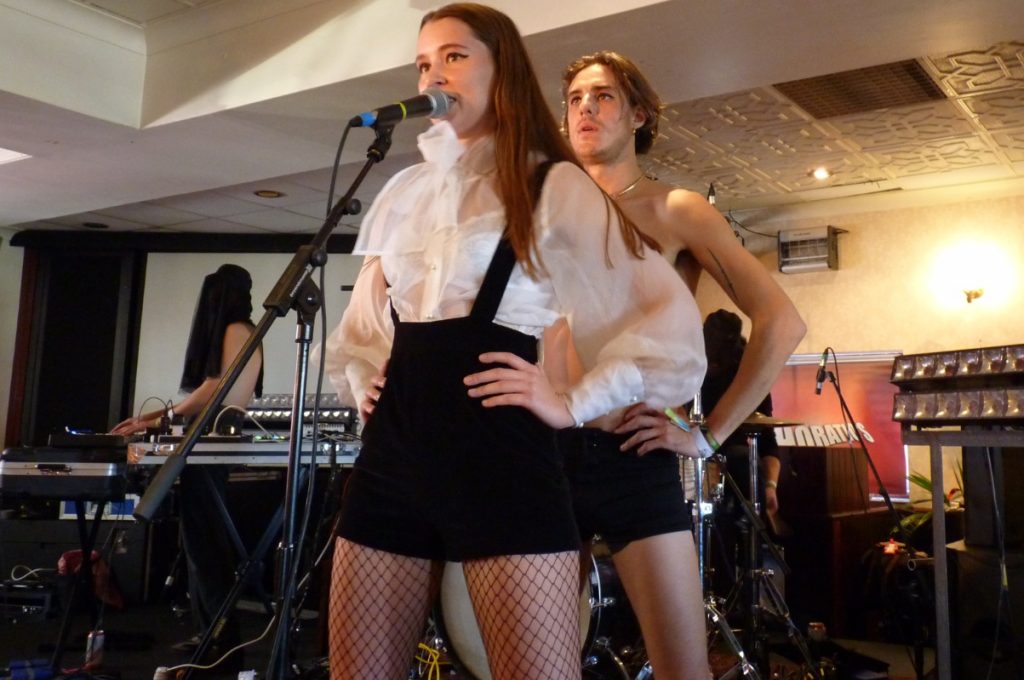 CONFIDENCE MAN (13:30-14:00 Horatio’s). Having seen Confidence Man on day one of TGE, we really didn’t want to miss them again. So we made the difficult decision to drop the planned Kamikaze Girls gig as they are coming back to Brighton shortly and the fact that they would be playing a longer set then. Confidence Man are terrific fun and they have produced extremely catchy dance pop music with a unique look too. They are from Brisbane, Australia and is the brainchild of Clarence McGuffie and Reggie Goodchild, who dress as black bee-keepers on stage. They are fronted on vocals by girl and boy dancers Janet Planet and Sugar Bones. When they finally release an album it would be totally ideal as a keep fit or running video. I can’t understand how their final track, the single, Boyfriend hasn’t been as successful as something like Whigfield’s Saturday Night. Yes I know cheesy as hell, but virtually the whole crowd crouched down with the dancers and jumped up again. They have also released Bubblegum as a single, however their as yet unreleased compositions are arguably their best, such as I’m In A Band, Try Luck, Sit Down, Fascination, Catch My Breath and their funky set opener called Intro. I really want them to release these tracks very soon in order to brighten up the summer as everyone needs some Confidence Man in their lives! We agreed that this lot were the best artists of TGE 2017. https://www.confidenceman.com.au/ 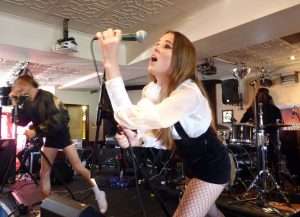 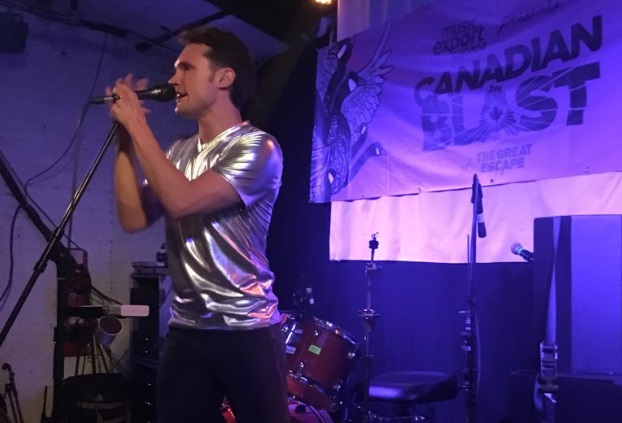 HELLO MOTH (14:40-15:00 Green Door Store). There’s no doubt about it that this Canadian guy travels very light indeed as his little electronic boxes of tricks fit into their cases that measure around only 12 inches long and 6 inches wide . The word unique is bounded around quite a lot these days, but I would definitely say that Hello Moth is unique. He is doing his own thing whether people like it or not – the TGE crowd at the Green Door Store thankfully did like it. His captivating presentation was rather dramatic and I would possibly think that he must have studied ballet or theatre by the way he carried himself around the stage to his personal electronic compilations. He thinks outside of the box, an example of which was his take on a 1700’s song. His Slave In A Stone album is out now. http://www.hellomoth.com/ 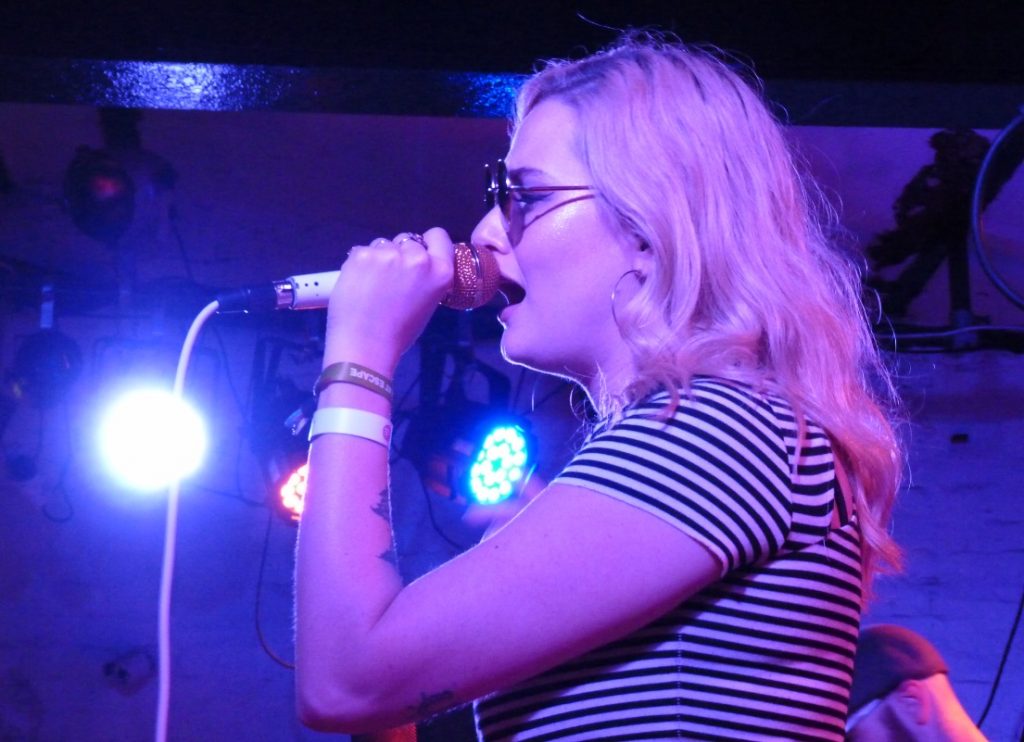 Youngblood at the Green Door Store 20th May 2017

YOUNGBLOOD (15:20-15:40 Green Door Store). Another Canadian act up next by the name of Youngblood from Vancouver, Canada. The singer is Alexis Young and both her and her band were very popular during their TGE appearances. They appear to be heavily inspired by the French electronic retro-futurist duo Air, and Alexis has described her music as what the ’60s thought the future would sound like. Check out the Easy Nothing video, which does tend to remind me of Blondie. http://www.youryoungblood.com/ 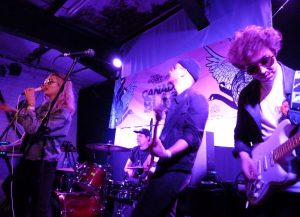 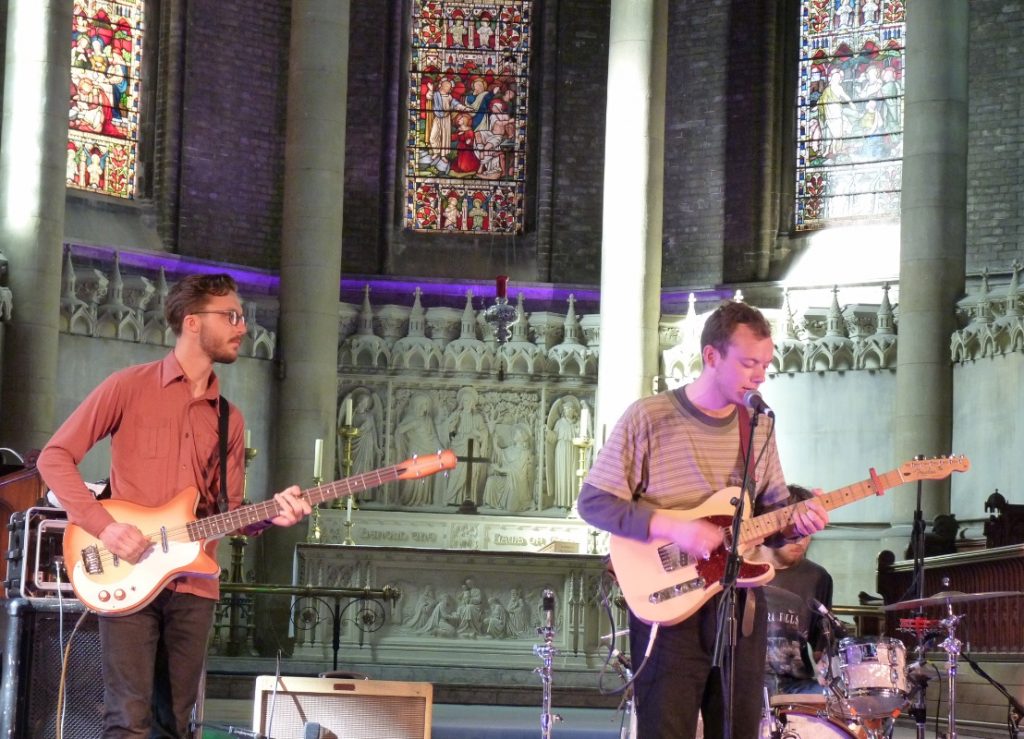 BREATHE PANEL (17:20-18:10 St Mary’s Church (St James’ St)). Thankfully we had a break for food and so we headed to the very highly regarded Foodilic in North Street for some healthy sustenance. We then headed up to St Mary’s Church in Kemp Town in order to take in four Alternative Great Escape artists at this venue . The first of which was Brighton’s very own Breathe Panel. This melodic indie four piece are purveyors of catchy tunes that border on the edge of shoegaze and I would suggest the best track was On My Way. These guys should do well and we would like to see them play live again. https://en-gb.facebook.com/breathepanel/ 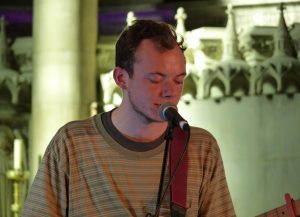 Brighton’s very own Breathe Panel at The Great Escape 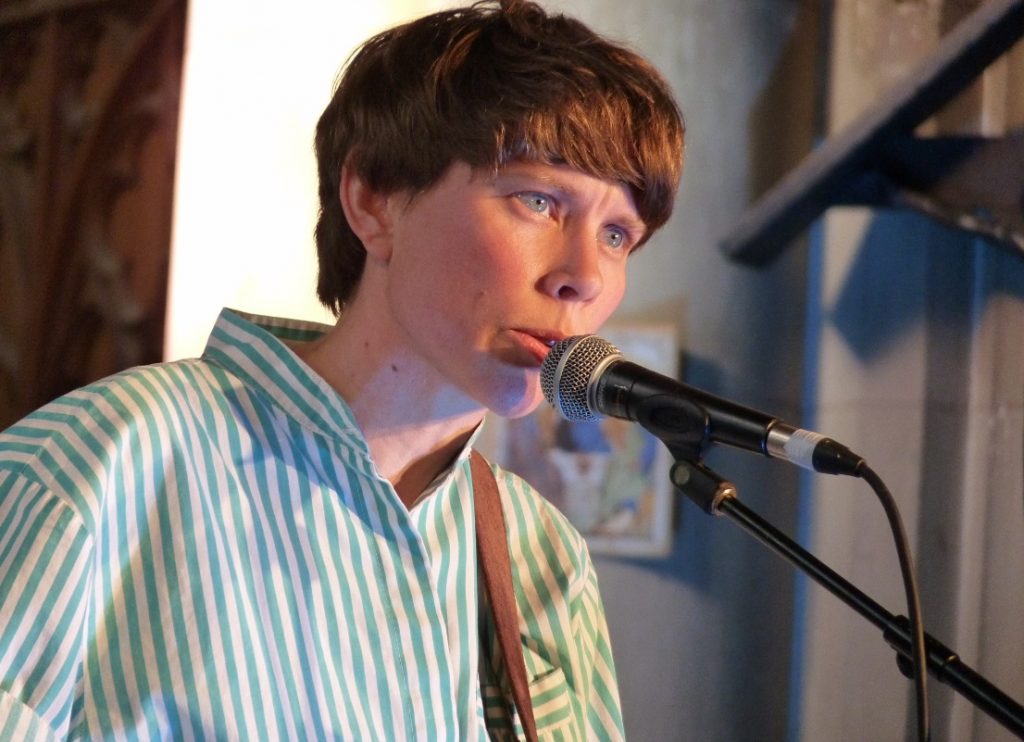 The Hundredth Anniversary at St Mary’s Church 20th May 2017

THE HUNDREDTH ANNIVERSARY (18:10-18:40 St Mary’s Church). These guys are a Brighton based trio who formed in 2012 and have understandably been twice named in NME’s Ones to Watch. For this gig they had a stand-in goth lady called Robyn, who picked up the reigns rather admirably. The Hundredth Anniversary specialise in dreamy vocals over a layer of beautiful Cranberries-esque music and they have released an album called Sea State Pictures this February. I have the distinct feeling that the late John Peel would be championing their cause if he was still with us. More concerts soon please ladies. http://www.thehundredthanniversary.com/ 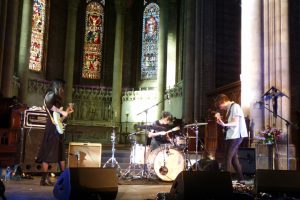 Robyn filling in for The Hundredth Anniversary at TGE 2017 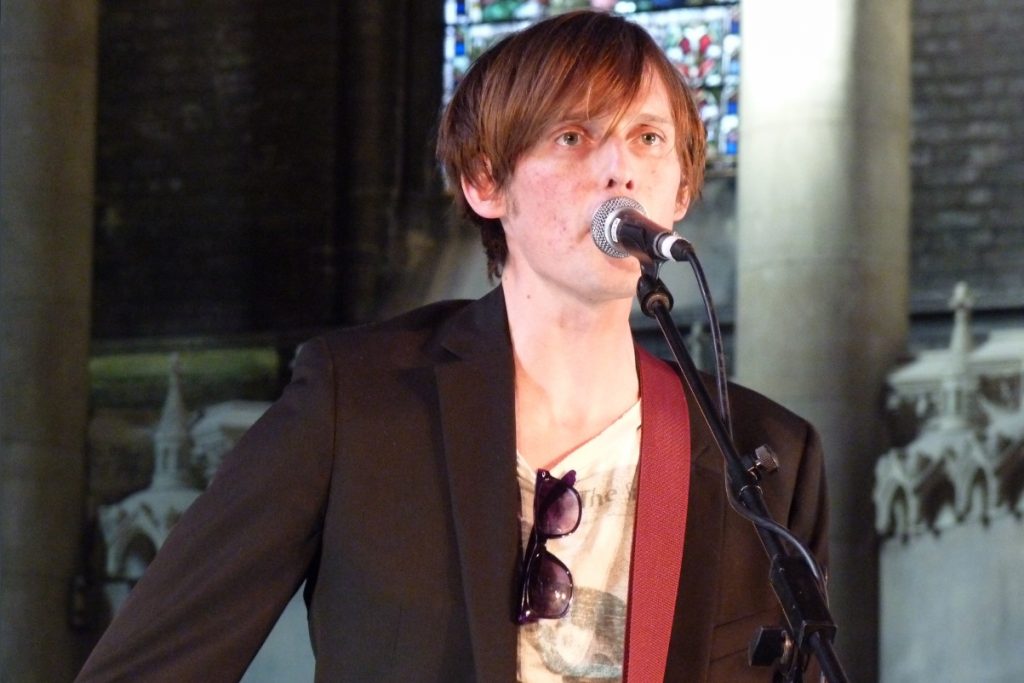 FRAGILE CREATURES (19:00-19:35 St Mary’s Church). The third of four Alternative Great Escape artists performing inside this grand church, were Brighton’s very own accomplished five piece ensemble Fragile Creatures. Aaron, Tom, James and two Adam’s make up the line-up for this guitar pop a la Squeeze soundalike combo. They unleashed their debut album last year entitled And Other Wild Things, which was the first release from new Brighton label BrightonsFinest Presents, however they were mainly performing new songs from a forthcoming second album at their TGE gig. http://fragilecreatures.co.uk/ 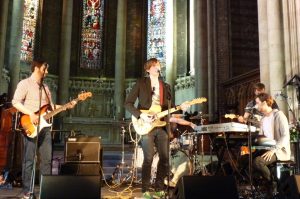 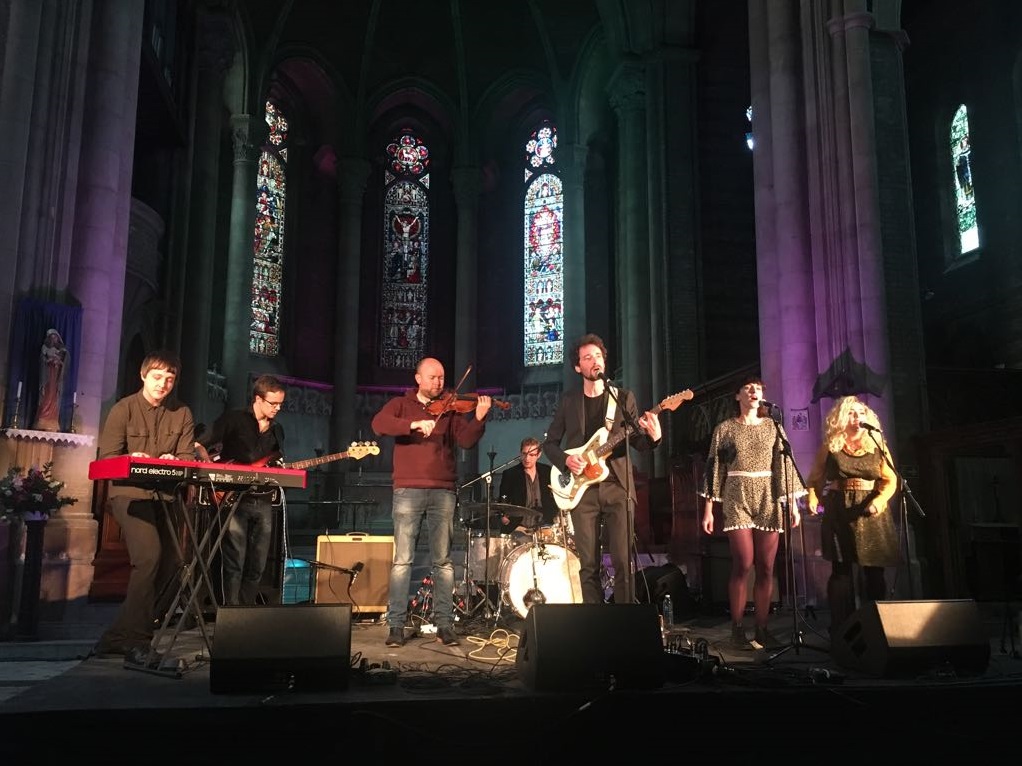 LAISH (19:55-20:30 St Mary’s Church). Pronounce Lie-sh, Laish was formed in Brighton in 2008 by Yorkshire born Danny Green. These days, a majority of the flexible seven-piece band have repositioned themselves in London but still have strong attachments to Brighton. Danny also sometimes appears solo as Laish. They produce inventive videos for their music, especially for my favourite two songs of theirs entitled Song For Everything and the truly uplifting Learning To Love The Bomb. I have owned their third album release, Pendulum Swing, for a few months now and a very fine record it is indeed. Their sound is a little difficult to pigeon-hole, but there is a mixture of elements of pop, indie, rock and folk all in there. This was my second Laish concert and hopefully there will be more in the future. https://laishmusic.com/ 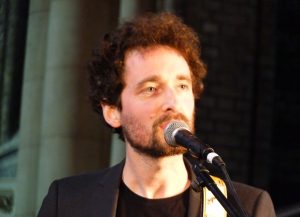 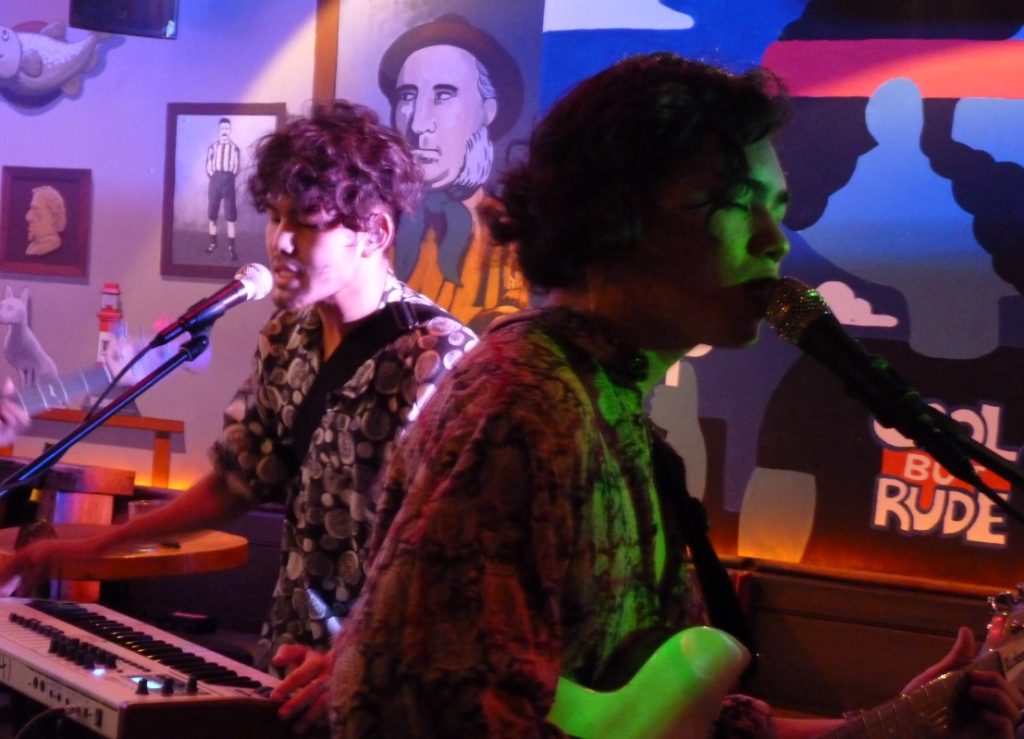 THE FIN. (21:00-21:40 North Laine Brewhouse (The Gloucester)). We had a brisk walk to the North Laine Brewhouse to see our final Alternative Great Escape artists, who were The Fin. from Japan – Yes they do have a full stop after their name. We had seen them perform at TGE 2016 in the Queens Hotel and very good they were too. This year, things weren’t exactly going to plan as they had overrun their setup time and alas there was only time for a mere four songs. This years band personnel had changed from last years and some may consider that appearing as part of the Alternative Great Escape this year could be perceived as a backwards step. I did actually enjoy last years gig more than this years, but they still do perform Westernised commercial inoffensive enjoyable pop music, that has been ever present on my ipod all year. http://www.thefin.jp/ 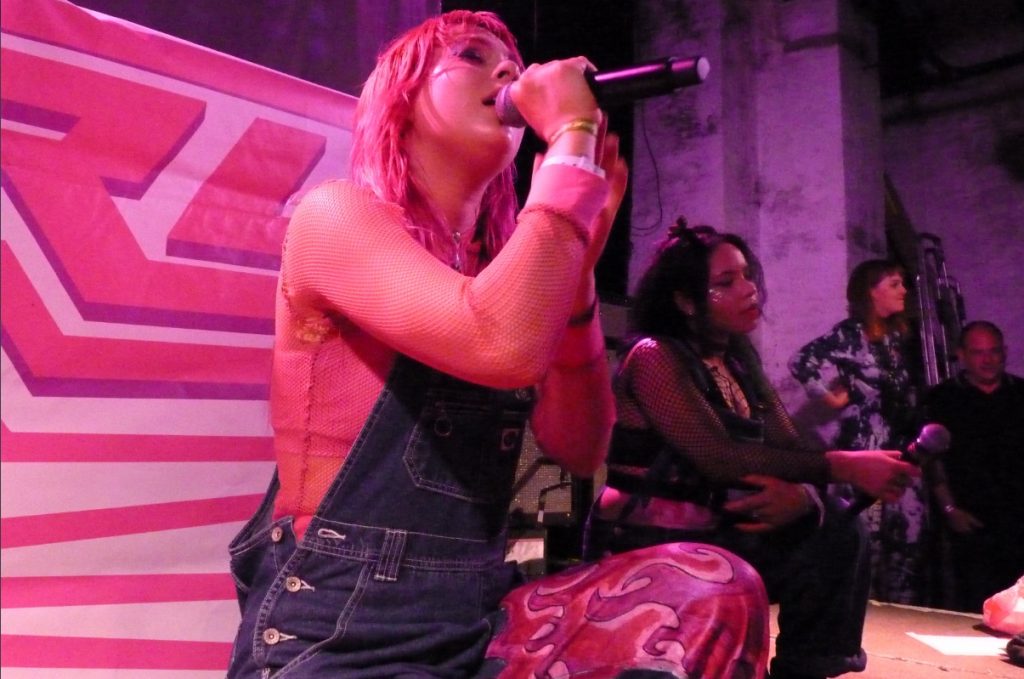 GIRLI (22:15-22:45 Green Door Store). We were overjoyed to see that Milly Toomey aka Girli and her partner in crime DJ Kitty were back again at the TGE this year, having controversially taken last years festival by storm with her gifts of feminine hygiene products to the crowd. Milly sure is the sound of the younger generation in the UK, with her in-yer-face modern day pretty in pink, tongue in cheek, down wiv-da-kidz-attitude. I am aghast as to why Girli isn’t riding high in the Japanese and UK charts, it sure is a mystery to me, as she is such an intelligent songwriter with an awesome image. Maybe her brand new Feel OK EP featuring Lethal Bizzle, which was released during TGE will do it for her. This is my third Girli gig and all have been enjoyable affairs, with the pick of this gig being her single Not That Girl. Although alas he didn’t perform my current Girli fave called Neck Contour – maybe next time. http://girlimusic.com/ 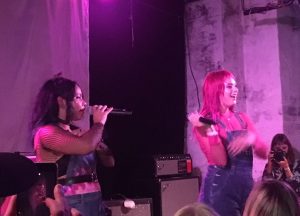 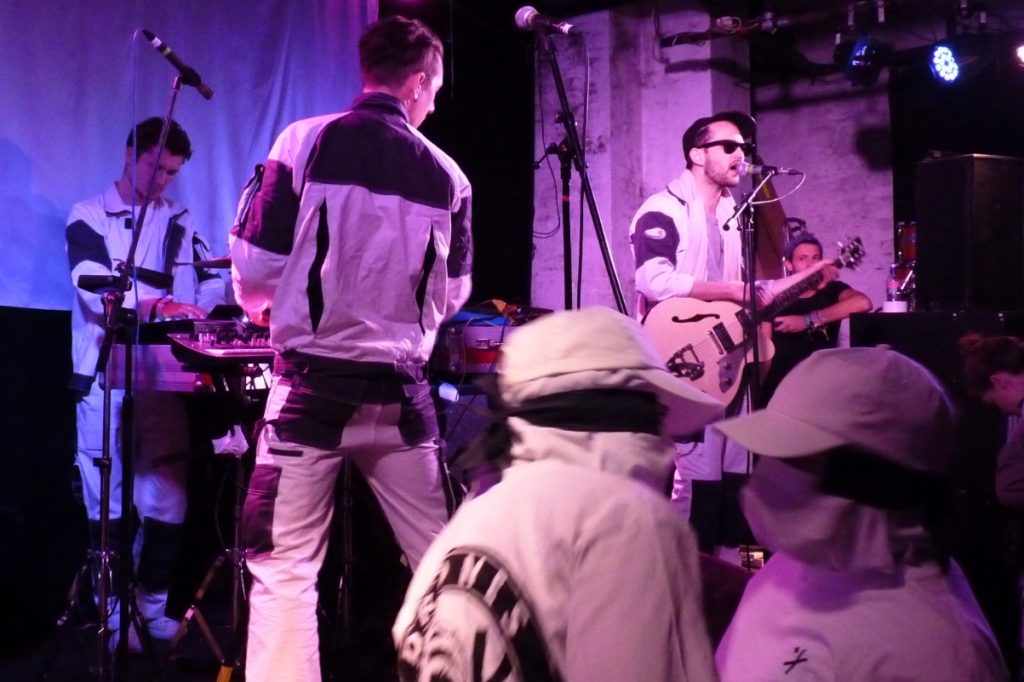 DRONES CLUB (23:15-23:45 Green Door Store). Our final TGE 2017 act was thankfully not just a gig but an unforgettable experience from the UK collective known as Drones Club. To be honest we were totally unsure as to what to expect from these guys, who were dressed as pseudo ninja space cadets and who had strategically placed dancers in the crowd. One of their ranks was quite a dare-devil as he climbed the speakers and touched the ceiling and then swung from the rafters twice during their loud electronic music set. The singer made great use of the vocoder and their enthralling set kept weaving to and fro between their anchor track called This House, almost as remixes of the same song. We would truly love to see these guys play live again as it was a great event and was a terrific way to end our TGE 2017 http://www.drones-club.com/

The Great Escape Days 1 & 2 are also available to be read.

Roll on next year! 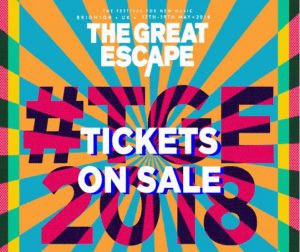