A man has been arrested after an arson attack at a high-rise block of flats in Brighton early yesterday morning (Sunday 3 February).

One man was rescued from his balcony by firefighters as the blaze, at Wiltshire House, in Lavender Street, Brighton, was put out quickly without the need to evacuate the building. 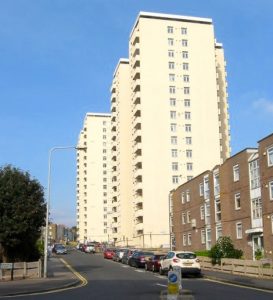 Wiltshire House, with Hereford Court behind, in Lavender Street, Brighton

The fire was started on the fifth floor of Wiltshire House at about 6.45am, with police called in about half an hour later as an investigation started into the cause.

Sussex Police said: “About 7.13am on Sunday (3 February), police were called by East Sussex Fire and Rescue Service to a report of a fire at a block of flats in Lavender Street, Brighton.

“The fire, believed to have been caused deliberately, was in the communal area.

“One resident was rescued from his balcony by firefighters. However, no other flats were affected and there was no requirement for an evacuation.

“A 27-year-old man from Brighton has been arrested on suspicion of arson with intent to endanger life and released under investigation pending further inquiries.”

The fire service said: “Crews from Preston Circus, Hove, Lewes and Newhaven fire stations were called to Wiltshire House, Lavender Street, Brighton to a fifth floor fire at 6.46am.

The block is owned by Brighton and Hove City Council. The council’s executive director of neighbourhoods, communities and housing, Larissa Reed, said that staff had “responded well to the emergency”.

She said yesterday: “All the residents have been spoken to and are happy to return to the flats.

“We are currently working with the cleaning contractor to ensure that the block is cleaned and any smoke residue is removed from walls today.

“Our technical teams will be out tomorrow to look at how the block responded to the fire and any remedial works required.

“The service responded well to the emergency and housing – and emergency planning staff responded by visiting residents and arranging/managing rest centre provision.”

Two families were initially treated as displaced by the fire and a rest centre was opened at nearby Leach Court although, with the fire contained and put out quickly, it ended up not being needed. 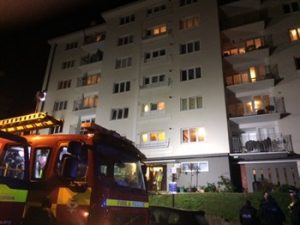 The fire is the second arson attack at Wiltshire House in less than two months. Security cameras pictured someone pushing something that had been set alight through a letterbox at about 2.20am on Saturday 8 December.

Last month, on Friday 11 January, firefighters rescued five people when they tackled a second-floor fire in a flat in Calendula, a seven-storey block in Donald Hall Road, Brighton.

A residents’ meeting is expected to take place at Wiltshire House at 7.30pm this evening.