An old family home in Brighton is to be renovated and turned into flats, with two houses built in the back garden.

Owner Ben Evans, whose family has owned and lived in the house in Preston Park Avenue for 100 years, said that it needed modernisation and repair and the cost of its upkeep was too much for a single home.

He told councillors this afternoon (Wednesday 6 February): “The house is not listed and has been subject to alterations over the years, especially at the back.

“We have been working with planning officers to improve the application.”

Changes to the original plans included keeping a side extension, so there would be no driveway or road access directly to the houses in the back garden.

He said that the houses proposed for the back garden would be 23 metres away from the nearest window.

The house is currently a family home with a self-contained flat on the second floor.

It can be converted into six flats, after approval was given by Brighton and Hove City Council Planning Committee.

A 1940s garage is to be demolished to make way for two car parking spaces.

Neighbour Jamie Matthews spoke for “dozens” of neighbours objecting to the plans.

He told the Planning Committee at Hove Town Hall that there was “not a single” comment of support for the scheme.

And he added: “The gardens at the rear of 24 and 25 are the largest continuous green areas on the street. They are a haven for wildlife including birds, bats and foxes.”

Mr Matthews also raised concerns about how earth and rubble would be removed from the site and how the fire service would reach the houses as direct access from the street was removed. 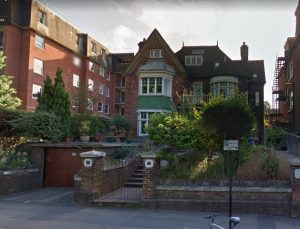 Conservative councillor Carol Theobald welcomed the restoration of the old house as part of the scheme and told the committee that she did not feel that the two houses were an overdevelopment.

She said: “I will be so glad to see it being renovated and keeping its lovely features. It would be a shame to lose that.

“I do not usually go for back land developments but in this case it has been sympathetically done.”

Conservative councillor Joe Miller said that the back garden homes would make the restoration viable.

Green councillor Leo Littman said: “The discussion between the applicants and the officers has led to a scheme which on balance I cannot find a reason to object to. It is a decent development.”

Labour councillor Julie Cattell, who chairs the Planning Committee, said that the plans would be “better than a row of garages”.

As a condition of the planning permission, the owner was asked to pay £182,000 towards affordable housing locally and £6,900 towards improving sustainable transport in the area.