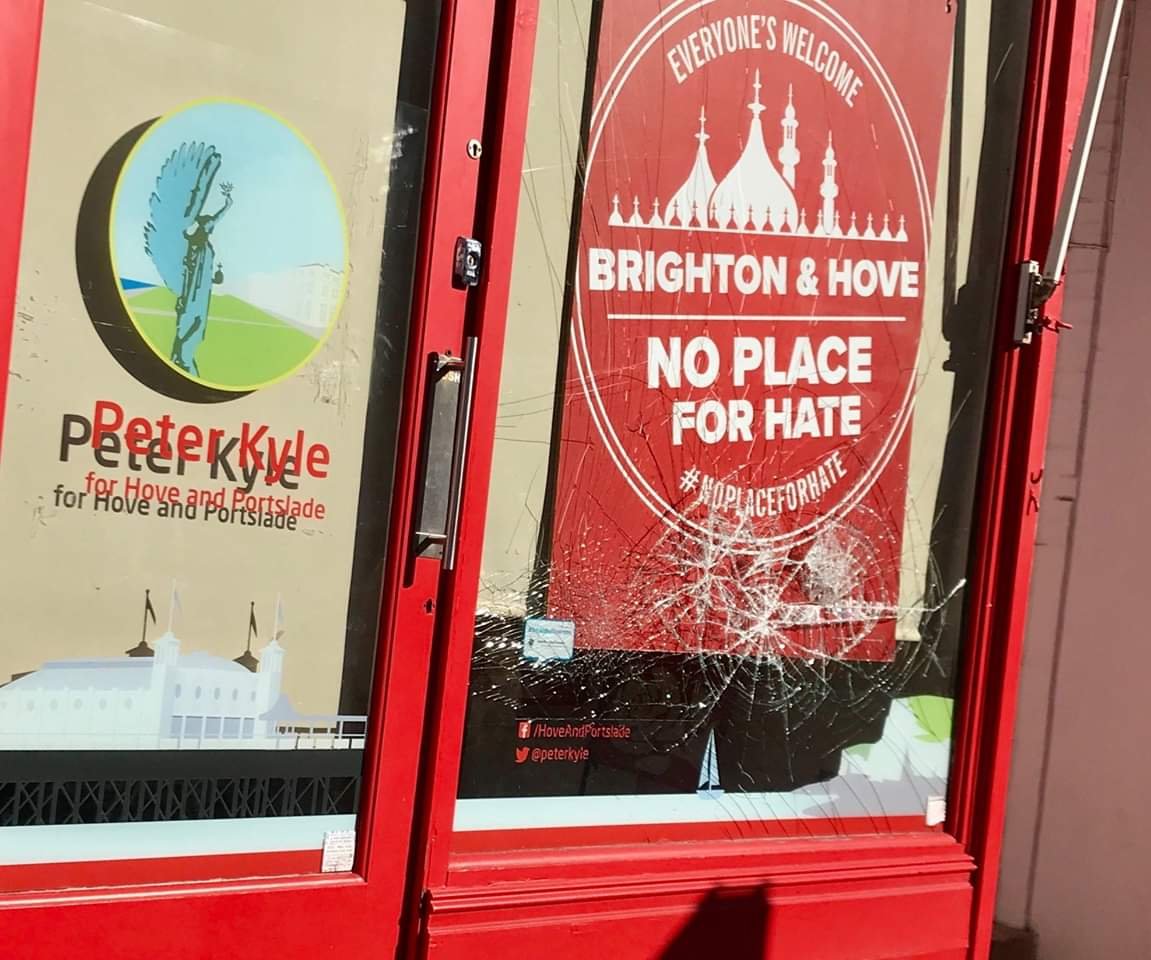 Hove MP Peter Kyle has revealed police advised him to move his constituency office to a more secure location before its window was smashed today.

But this evening the Labour MP posted a picture of the reinforced glass, which has now been smashed next to a poster declaring No Room For Hate.

Mr Kyle said: “I’ve got a message for the person or people who smashed the window to my shopfront: There’s a better way to make your views heard – come and talk to me!

“I’ve never spoken publicly about the warnings I get from police about my safety because I’m very well aware that people right across our community face threats spanning domestic violence to racism and I am lucky enough to have the kind of extra attention from police that they dream of.

“As a consequence of my increased role in the Brexit debate, our amazing local police carried out a review of security and recommended that we fit strengthened glass to the shopfront and various other adaptations too.

“It’s why we returned the No Place For Hate poster to the window as it felt like we needed reminding of it. It’s an irony that that’s the window that’s been smashed.

“Several times in recent months I’ve been asked to consider moving to a more secure location. I can’t. I can only do this job as I am, and central to that is being totally accessible to everyone throughout our community.

“I’d rather give up the job than an office that is available for anyone to walk into that needs a helping hand or simply to say hello to their MP. I simply won’t do it.

“Who knows why someone does this kind of thing. Maybe it was a stupid prank, maybe it was a political message, or who knows it could have been an accident.

“But I hope whoever did it will bear two things in mind.

“Firstly, this isn’t just my office it’s also the workplace for the most caring and hardworking group of people around, all of whom turn up every day trying their best to make our community a better place and support people in desperate need…they’re not pesky politicians like me!

“And secondly, right next to that window there is a door. Wouldn’t it be better for you to walk through it when I’m there and speak to me about whatever makes you angry?

“Whatever you think today, that door is still open for you just as it is for everyone who lives here too.”

Mr Kyle and fellow Labour backbencher Phil Wilson have been in the headlines in recent days because of their proposed amendment under which MPs would support the prime minister’s Brexit deal on condition it is put to a public vote in a second referendum.

The amendment has the support of the newly formed Independent Group of former Labour and Tory MPs who left their parties last week. There are reports the Labour leadership is now under strong pressure to back the amendment, and is said to be moving towards this position.

However, if the Labour leadership fails to support Mr Kyle’s amendment, it could trigger further defections from the party.

Although Mr Kyle has also been vocal in his criticism of Labour leader Jeremy Corbyn in the past, he strongly denied reports last week he was also considering leaving the party, instead insisting he was intending to stay in the part and fight.