Four blocks of flats were approved for an industrial estate in Hove, despite a campaign against them.

The four blocks by developer Crest Nicholson are for 152 flats on the Peacock Industrial Estate in Lyon Close, home to Toolstation, Howdens and Graham plumbing supplies.

It includes 21 studio flats and 49 one-bedroom, 76 two-bedroom and eight three-bedroom flats in the four proposed blocks.

There are also two live/work units, 697sqm of offices and an underground car park with spaces for 80 cars and 174 bikes.

Chas Linn from campaign group Hove Gold, who lives in Lyndhurst Road which backs onto the site.

He said: “We all want to get suitable community development but this is not this.

“It will have a significant impact on neighbours quality of life and impact on the area as it is an inappropriate design.”

Mr Linn told the committee the nearby Artisan building on Davigdor Road, has been a disaster as much of it remains unsold because people either could not afford to buy there and those who could did not want to.

He said: “Crest want to repeat Artisan four times over.

“This development adds zero value to the community.”

Hove Gold campaigners would like to see more high-density low-rise development at the site and showed images of Crest’s factor-built Urban Splash development in Manchester as a good example.

Goldsmid ward Labour councillor Jackie O’Quinn spoke against the application citing the “disaster” of Artisan as a reason why it would not work.

She said: “The design is unimaginative and unattractive and does not mix well with the neighbourhood.

“We want low-rise and high-density housing.” 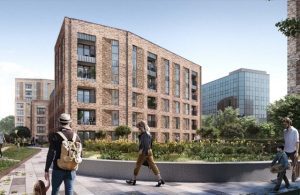 Councillor O’Quinn said that there had not been proper public consultation with the residents other then the developer responding to their objections.

Guy Dixon, planning director at Savills, on behalf of Crest Nicholson, told the committee that the application was on a brownfield site which was essential for development to help the council meet its five-year housing supply target.

He said: “The design seeks to make best use of this deliverable site to provide housing and offices. It represents a carefully considered scheme.”

Just 10 per cent of the homes in the development are affordable. Green councillor Leo Littman asked what happened to the originally promised 40 per cent.

He was told that the increasing costs and the fall in property prices meant that the development would not be viable.

Conservative councillor Lynda Hyde was concerned about the loss of employment space and said that there was a shortage of trade counters in the city. 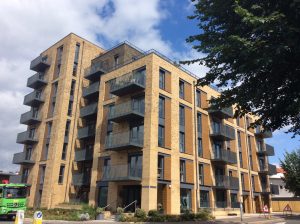 Fellow Conservative councillor Carol Theobald said: “It is a shame to lose businesses like Howdens.

“And Artisan is not selling. It is a white elephant and I hope if this goes ahead it will not go the same way.”

Councillor Littman said that he could not support the application due to the lack of affordable housing, high density, overlooking, lack of privacy and the poor design.

He said: “I do not have a problem with building something here with a reasonable level of density.

“What I would ideally like is for us to turn this down and something that fixes the problems we have identified comes back to us.”

Committee chair Labour councillor Julie Cattell reminded the committee during the afternoon’s deliberations that they had dealt with two greenfield sites where they did not want to build and now were opposing brownfield.

She said: “How are we going to house people if we don’t build upwards.

“I don’t think they are too tall. This is a good scheme.”